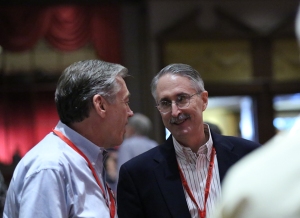 GREENSBORO, N.C. – At a luncheon sponsored by the Baptist Center for Ethics (BCE) and the Cooperative Baptist Fellowship of North Carolina, BCE Executive Director Robert Parham introduced the crowded ballroom to a new documentary on faith and prisons. This forthcoming documentary will be released in early 2014 and highlights the faith community’s engagement with prisons including outreach to inmates and officers.

Parham noted that the nationwide recidivism rate for those incarcerated is more than 40 percent. “Both political parties are recognizing that the recidivism rates are way too high and the cost of prisons are busting state budgets,” Parham said.

Parham explained that the only group making a real tangible difference on this issue is the faith community. He hopes that this documentary will raise much-needed awareness of the need for prison reform.

“I think what we can do that advances the common good is to show what others are doing in hopes that it will spark the imaginations of congregations across the country to emulate and duplicate those models,” Parham added.

Two versions of the documentary will be released with a shorter version geared for the general public and a longer version designed to be used by congregations.