This is Part 2 of a series on the South Africa Ministry Network. Read Part 1 here.

Any time Africa is the topic of conversation, that’s what you hear from someone who has been. It’s almost a cliché. I’ve never heard anyone say that about Hawaii or a Caribbean cruise or even a European vacation, so there must be some truth to it, right?

Well, I found out firsthand my life has been changed in many ways.

As part of the Young Adult team from First Baptist Church in Knoxville, Tennessee, I was privileged to take part in a week-long mission experience in South Africa with the CBF South Africa Ministry Network.

While in South Africa, our Young Adult Team volunteered at Door of Hope, an organization in Johannesburg that takes in unwanted babies and raises them with the hope of finding an adoptive family. 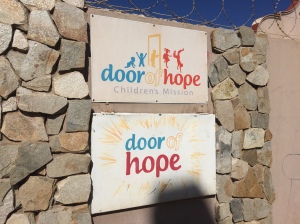 There is no question God is at work here.

Unemployment in South Africa approaches 25 percent, and tragically by the time some women deliver they decide they cannot afford to raise a new child. Infant abandonment is a problem of epidemic proportions in South Africa — in Johannesburg alone 200 babies are abandoned each month.

The stories of newborns being left to die or tossed out with the trash are horrific; I’ll be haunted for many years to come by what I learned.  Yet among this desperation, God is working.

During my time at Door of Hope, I was given the opportunity to spend a day playing with and feeding the kids. One little toddler and I became attached throughout that morning and she decided she enjoyed relaxing in my lap.

At one point, I was just staring in her eyes and wondering how many of those sweet children came within an inch being victims of abandonment or abortion. Their mothers made incredibly brave but difficult decisions to hand them over to this organization, knowing their child could grow up to have a more comfortable life than they were able to provide.

Door of Hope operates three houses. One is dedicated to infants, and the other two are for toddlers and older children. I was humbled by what I witnessed.

The second night we were in Johannesburg a newborn was dropped off with Door of Hope. We were able to meet her a few days later as a volunteer from Great Britain was tending to eight infants at one time. As we were introduced to “Baby J,” it hit me that she truly was only a newborn — her umbilical cord had fallen off only that morning. 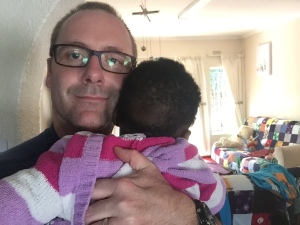 The women who work at Door of Hope see this not as a job but as a calling. I had the honor of leading the group in their morning devotional and prayer time. These children are surrounded by love and by caretakers who love the Lord.

Door of Hope is an organization that has been built with love and compassion. My heart aches for the babies abandoned every day. To see a society where such daily tragedy is the norm is shocking, but to see what God is doing through Door of Hope is genuinely uplifting. I feel very fortunate and thankful to have been able to spend the day at Door of Hope.

And yes, my life has been changed.

Monte Miller is a member of First Baptist Church in Knoxville, Tenn.