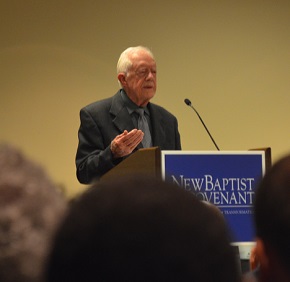 Focusing on the political and social climate of the United States on the heels of the 15th anniversary of the September 11 terrorist attacks, President Carter shared his hope that the New Baptist Covenant — the movement he launched in 2007 to break down barriers of race among Baptists — would take to heart the Apostle Paul’s call to the church in Thessalonians to be strong, courageous and firm in the face of persecution.

“This persecution [of the church in Thessalonians] is mirrored to some degree in the life of our country,” Carter said, highlighting the concerns of long-term wars, the Great Recession and growing economic disparity in the United States, all of which served to buttress the fear of terrorism and usher in a resurgence of racism across the nation.

In the face of these issues, Carter noted, change comes slow and inevitably. Reflecting on the origins of the New Baptist Covenant, Carter reminded the crowd that the movement’s goal was to improve harmony among Baptists to encourage more effective ministry.

“I wanted to address how we could change our reputation from division to unity,” he said.

Carter shared that he was amazed at the first meeting of the New Baptist Covenant in 2008, where more than 15,000 Baptists attended — an enormous diverse group “searching for a way to be in superb relationship.” The 39th President said that the movement must continue to explore ways to bring churches and people together across racial and ethnic borders.

The hope of the New Baptist Covenant, Carter said, is to expand and reach every church and every community, not just Baptists. In addition to pursuing racial reconciliation, Carter stressed the importance of combatting the persecution of women and girls, even in the United States. In both racial discrimination and discrimination of women and girls there are those that are more privileged “don’t give a damn,” Carter said.

Carter expressed his personal thanks to the gathered leaders of the movement, encouraging them to continue their good but difficult work, and prayed that those gathered will be strengthened in partnership with one another and with God.

The three-day summit continues through Friday with workshops and conversations to explore covenant relationships and features keynote addresses from Traci Blackmon, executive minister of justice and witness for the United Church of Christ, and Tony Campolo, popular author and professor of sociology at Eastern University. Learn more about the work of the New Baptist Covenant, a CBF partner organization, at www.newbaptistcovenant.org

One thought on “At Summit, President Carter urges Baptists to adopt a reputation of unity”