ATLANTA — “We are the Pilgrim Church called for the task of unleashing Heaven’s Kingdom here on earth,” Cooperative Baptist Fellowship Executive Coordinator Suzii Paynter said during the opening business session of the 2017 General Assembly in Atlanta.

In an address titled “A Journey and a Home,” Paynter reflected on the truly Baptist nature to be a “relentlessly pilgrim community” as a church always on the move, forming together to bring about God’s vision of the Kingdom of God.”

“What are our signposts to that vision,” asked Paynter, citing Isaiah 11, Revelation 21 and Amos 5. “We are the Pilgrim Church called for the task of unleashing Heaven’s Kingdom here on earth. We are immersed in great and marvelous realities — creation, restoration, reconciliation, resurrection.”

Paynter reflected on the Christian community and the binding act of baptism. The body of Christ forged in the waters of baptism is a collection of individuals who are both alike and different.

“When we come dripping out of the waters of baptism, we realize that the community of baptized are just like us — unfinished, immature,” Paynter said. “That is the incredible task of God, to join hands with imperfect ones such as we.”

Much like the Pilgrim Church, Paynter added, our God is a Pilgrim God, in search of us. “Whatever visions and passions that we bring, God’s vision precedes us, transcends us and includes us. We must then have the will to do work together sacrificially and seek intentional community in spite of differences.”

“As pilgrims together, there is no catching these glimpses of Isaiah or Revelation or Amos on our own,” Paynter said. “Live full lives in the fullness of God, because God can do anything, you know? More than you could ever imagine. God does it not by pushing us around, but by the Spirit working deep within us.” 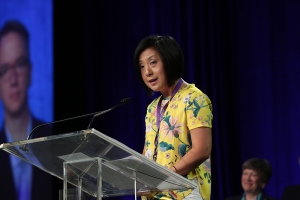 This Spirit helps us to forge together the love that unleashes the Kingdom here on earth, Paynter noted.

“Stay connected,” Paynter said. “Keep in sight of these sisters and brothers and let us head for the homecoming visions that God has given us.”

During the opening business session, attendees heard reports and received motions from the Governing Board. Board member Bill McConnell introduced the 2017-2018 CBF Missions and Ministries budget — a total revenue and expenses budget of $13,679,024. CBF Past Moderator Matt Cook introduced the report of the Nominating Committee and CBF Moderator-Elect Shauw Chin Capps introduced recommendations from the Governing Board to serve on all of the Fellowship’s governance bodies (complete list). The proposed budget and slate of nominees will be voted on at the June 30 morning business session.

Rachael Johnson brought greetings to the Assembly from CBF Bahamas and shared reflections on her first summer serving as a CBF Student.Go intern alongside CBF field personnel in St. Petersburg, Fla., and spoke about her ministry this summer as a Student.Go intern in Atlanta. 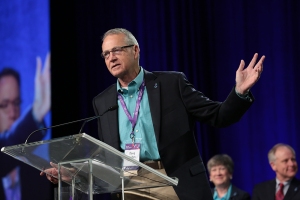 “These are just a few of the many ways this great assembly has helped me to answer the call to the Gospel,” said Johnson. “May all who come behind us find us faithful.”

Soprano Lissette Carillo from Havana, Cuba, offers her gifts as attendees gathered for the business session

The Assembly heard music from Lissette Carillo, soprano from Havana, Cuba, and member of CBF partner organization Fraternidad de Iglesias Bautistas de Cuba, and were led in a time of prayer with the guiding scripture of 2 Corinthians 5:14 — “Christ’s love compels us” — which has been the theme for CBF’s 25th Anniversary celebration and campaign. The morning session also included a time of presentation of gifts to the Fellowship from CBF state and regional organizations to celebrate the silver anniversary of CBF.

CBF is a Christian network that helps people put their faith to practice through ministry efforts, global missions and a broad community of support. The Fellowship’s mission is to serve Christians and churches as they discover and fulfill their God-given mission.