When members of the Cooperating Baptist Fellowship of Oklahoma helped restore the tabernacle at the Oklahoma Indian American Baptist Association’s campground in Anadarko a few years ago, they created a living metaphor for CBF life in the Sooner State.

The newly-formed Cooperative Student Fellowship of the University of Oklahoma pictured with CBF field personnel Matt and Michelle Norman during a mission experience in Barcelona.

They embodied the power of cooperation. The New Baptist Covenant-sponsored project relied upon the talent and sweat of not only the Native American Baptist group, but also engagement from the Oklahoma affiliates of the Cooperative Baptist Fellowship and the Progressive National Baptist Convention. Together, they took on a job too big for any one group, but perfect for a collaborative endeavor, explained Steve Graham, coordinator of CBF Oklahoma.

They respected and reflected their state’s heritage. An American Baptist missionary started 12 Oklahoma Native American churches in 1892. Their descendants “are natural partners” with CBF Oklahoma, Graham said. The CBF group now is in the middle of a 10-year partnership commitment with Native American churches in three northwestern Oklahoma communities—Canton, Geary and Watonga. 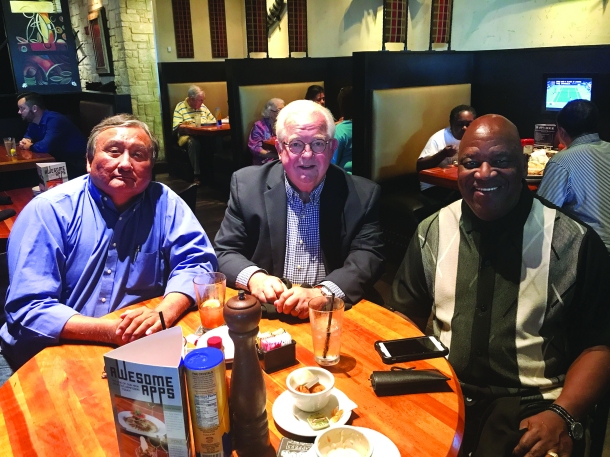 They focused on practical missions and ministry. A tornado tore the tabernacle apart, creating an obvious need for restoration. Similarly, the ongoing relationship with the Indian Baptist congregations focuses on rebuilding and remodeling houses of worship, as well as conducting Bible studies and ministering to children.

If cooperation, tradition and missions form the backbone of CBF Oklahoma’s identity, then coming together infuses it with strength. That happens at CBF Oklahoma’s annual Celebrating Excellence banquet.

Every fall, the banquet honors an exemplary Baptist affiliated with Oklahoma. But it also provides an excuse for Cooperative Baptists from across the state—usually about 250 people from 17 to 20 churches—to spend an evening together and to revel in each other’s company.

“Celebrating Excellence has become an opportunity for churches and individuals to come into the same room and to understand how much we share in common,” Graham explained. “Sometimes, we feel isolated. If you align with us, you can get cut off. But then we realize there is more here than we think—we really are good conversation partners and mission and ministry partners.”

CBF Oklahoma is proud of the contributions it has made to the larger Fellowship community, even as it prepares a new generation of CBF leaders, Graham said.

Youth from Trinity Baptist Church on a summer mission experience at the Native American Ministry in Canton, Oklahoma in 2017.