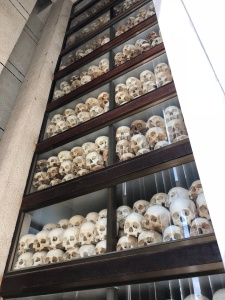 Bones of victims of the Khmer Rouge in a memorial at the Killing Fields.

Recently, I preached in our Cambodian church about the Valley of Dry Bones from Ezekiel 37:1-14. In that passage, the Lord brings Ezekiel to a valley full of dry bones and asks, “Can these bones live?” What a loaded question! How could Ezekiel know the right answer? He responds expertly, though: “Sovereign Lord, you alone know.” He is buying himself a little time while he waits to see what God is up to. He’s not sure if bones can come back to life, but just in case they can, he wants to be around to witness it.

The Lord instructs Ezekiel to prophesy to the bones and the breath to come together and form living, breathing people. The bones, the Lord explains, represent the people of Israel, who say, “Our bones are dried up and our hope is gone; we are cut off”. The Lord, speaking through Ezekiel, will tell Israel, “My people, I will open your graves and bring you up from them…I will put my Spirit in you and you will live.”

The church in which I preached this passage is a 10-minute walk from the Choeung Ek Killing Field, which has been preserved as a memorial to those who died in this and similar killing fields scattered throughout Cambodia during Pol Pot’s genocidal Khmer Rouge regime in the late 1970s. Scholars debate how many people were killed during this bloody period. In fact, the impossibility of arriving at a definitive number of casualties can be illustrated by this: sometimes rain washes away dirt at the killing fields, uncovering a bone from another Khmer Rouge victim. The earth itself has not yet finished telling us the stories of the violence it witnessed.

While the country has made progress since the end of the Khmer Rouge in 1979, it still has deep wounds that may take generations to heal. Like the bones that wash up in the rain, so old trauma washes up at unexpected times. Like the people of Israel in Ezekiel’s day, many Cambodians feel that their bones are dried up, their hope is gone, they have been cut off.

And yet, the story doesn’t end there. Several years ago, the Cambodia Baptist Union cast a bold vision: to plant a church in every village in the nation. We have come to Cambodia to work alongside the CBU, helping it to build its capacity to fulfill its vision of cultivating beloved communities that bring truth, healing, reconciliation and justice to their villages and beyond. 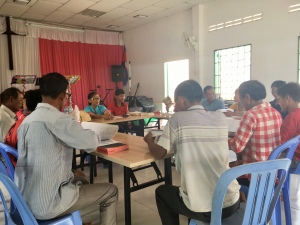 I was perhaps most impressed by Pastor Kong’s commitment to mentorship. She identifies people who seem gifted for ministry leadership, many of them young people in one of her village churches or children’s home. She will bring that person to a new church as a children’s ministry leader, for example, and they will do ministry together for a few weeks. As the student gains confidence, Pastor Kong steps back, observing and answering questions but letting the student lead.

As I visited with Pastor Kong and saw her ministries firsthand, I knew that God had called her to the front lines of the advancing gospel work. The Spirit of God, working through Pastor Kong, is bringing dry bones together and filling them with breath and life. I want to help make training, mentoring, encouragement and other resources available to Cambodian leaders who, like Pastor Kong, have the gifting and calling to make disciples and seek justice in their communities.

The fields of literal dry bones scattered throughout the country are a reminder of the many Cambodians who feel hopeless and cut off. God has called us here to work, placing us in the middle of this valley and asking us that always provocative question, “Can these bones live?”

With my head I say “No, the damage done here is too great.”

With my heart I say, “Yes, of course, they can and they will!”

With my spirit I say, “Sovereign Lord, you alone know.”

David Bass and his wife, Lauren, are CBF field personnel serving in Cambodia alongside the Cambodia Baptist Union. Learn more about and support their ministry at www.cbf.net/bass.

The Basses long-term presence in Cambodia is made possible by the CBF Offering for Global Missions. Join God’s mission in the world. Give to the Offering for Global Missions. 100 percent of your church’s gifts will be used to send CBF field personnel to share the Good News of Jesus Christ around the world. Go to www.cbf.net/transform and order your free OGM resources today.