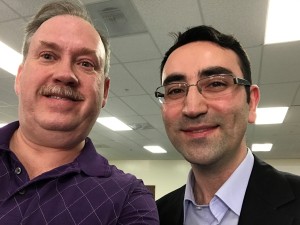 Rick Sample (left) with a Turkish man at the inter-faith prayer service held after the Christchurch shooting in March.

On March 15, 2019, coordinated mass shootings were perpetrated at two mosques in Christchurch, New Zealand, shocking that peaceful nation and once again adding a new layer of grief in the wake of global terrorism.

New Zealand, a country with virtually non-existent gun murders, was suddenly faced with dozens of gunshot victims. New Zealand, a country that has welcomed Muslim refugees fleeing from war zones such as Afghanistan found itself thrust into a war zone in a city with such a religiously sounding name as Christchurch. At the center of this evil act was a hatred of Islam and by extension a hatred of the Muslims of the world. That these murders took place in houses of worship while peaceful New Zealander Muslims were carrying out their Friday prayers is especially appalling, and is reminiscent of mass shootings at Baptist churches, at Jewish synagogues and Sikh gurdwaras.

I am part of an inter-faith dialogue that meets monthly at a Turkish mosque where I speak on behalf of Christianity, and right after the New Zealand shooting they held an inter-faith prayer service. I went expecting to sit quietly and respectfully during their program. Toward the end of the service, the facilitator asked if there were any leaders from other faith communities that would like to speak. I was not prepared to say anything but realized this was a wonderful opportunity to say something compassionate as a representative of Cooperative Baptists and as an instrument of Christ’s peace.

I started walking up to the front from where I was sitting on the back row and as I approached the microphone, Romans 12:15 popped into my mind.

I introduced myself as “Pastor Rick” from the Cooperative Baptist Fellowship. I went on to say that the Bible teaches us that we, as Christians, are to rejoice with those who rejoice and weep with those who weep. I said that American Christians were grieving with them today. I said that even though the killings occurred in New Zealand and we were in California, I knew that they felt the attacks were against all Muslims. I said that we were all God’s children on this earth, and that today we Christians shared in their grief. Remembering that all my life in church I had heard that we as Christians were supposed to love everybody in the world and to show God’s love to everybody in the world, I concluded by saying that American Christians love Muslims.

I spoke for only about 45 seconds but I could sense that my words had a comforting effect on this mostly Muslim audience as they were nodding their heads and wiping away tears. Afterward I had at least fifteen people come up to me to thank me for what I had said. People really appreciated my words of comfort and my heart of compassion.

Rick Sample and his wife, Lita, are Cooperative Baptist Fellowship field personnel serving in the San Francisco Bay Area of California through welcoming refugees and internationals, outreach programs, church planting and more. Learn more about and support their work at www.cbf.net/sample.

The Samples’ long-term presence in California is made possible by the CBF Offering for Global Missions. Join God’s mission in the world. Give to the Offering for Global Missions. 100 percent of your church’s gifts will be used to send CBF field personnel to share the Good News of Jesus Christ around the world. Go to www.cbf.net/transform and order your free OGM resources today.