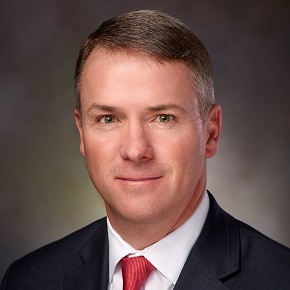 Later this week, Reese will assume the role of Moderator, the Fellowship’s highest-ranking officer, succeeding Gary Dollar in the role.

I recently interviewed Reese, who now serves as Deputy Director of OneJax Institute at the University of North Florida and pastor-in-interim at Hendricks Avenue, as he steps into this new role as CBF Moderator. Read our conversation below:

Aaron Weaver: Will you share with readers about your childhood and educational journey? Where did you grow up and go to school?

Kyle Reese: I was born and raised in Amarillo, Texas, where I was a member of River Road Baptist Church and graduated from River Road High School. Experiencing a call to ministry, I was led to nearby Wayland Baptist University. After graduating from Wayland and serving on church staff as a youth minister, I knew I needed more education. At that time, Baylor was in the process of forming George W. Truett Theological Seminary. I had the honor of being in the inaugural class. As far as ministry and career go, it was the best decision of my life.  I later was awarded a Doctor of Ministry degree in preaching at Northern Seminary.

Weaver: Who have been important influences in your life?

Reese: It’s true that “It definitely takes a village.” The community of River Road Baptist Church was formative for me in countless ways. The church loved, challenged, and affirmed me in my early days of ministry. While my theology is now drastically different from what it was when I was in that congregation, the church continues to hold a special place in my heart. I learned most of what I know about pastoral ministry from Dr. Stacy Conner. I had the privilege of serving as youth minister in the church where Stacy serves as pastor. I have never seen anyone care for a congregation and community as he does. I still draw from the lessons he taught me.

I have been extremely impacted by ministry colleagues throughout the years, many of whom are active in CBF life:  Allison Gilliam, Mark Moeller, Tommy Shapard and Elias Garcia, to name just a few. Finally, my fellow participants in what Charles Wade used to call his “Truett Mafia” continue to sustain me in the journey.

Weaver: As a former pastor (and now interim pastor) of a CBF congregation, what has CBF meant to you? How did you connect with CBF?

Reese: I didn’t connect with CBF; CBF connected with me. As I was trying to figure out funding for my seminary education, it was Cooperative Baptists who reached out and invested in me financially. I had been active in an organization called Texas Baptist Committed as an undergraduate, so CBF became a broader outlet for me to live out a Baptist Christian way of being in the world.

Weaver: You’ve recently transitioned into the role as Deputy Director of the OneJax Institute at the University of North Florida. Could you tell us more about what OneJax is and how you came to be involved?

Reese: OneJax began as the National Association of Christians and Jews. In 2006, as changes were taking place in the national organization, OneJax was created. Our roots are in interfaith work and cooperation. A good deal of our work continues in the interfaith space. We’ve expanded into all kinds of diversity and inclusion work, including racial reconciliation, civil discourse and human sexuality.  I began serving on the OneJax board in 2010. For several years, I was chair of the Interfaith Committee. The opportunity to serve the organization and our community seemed like a natural next step in my journey.

Weaver: A favorite former pastor of mine always asked new members, ‘What makes your heart sing?’ as a way of public introduction to the congregation. Let me pose that question to you.

Reese: I love to tell stories. I love to tell them in the form of sermons and as I speak to community groups. Stories are transformational and hospitable. My work in the same city for 13 years has exposed to me to more and deeper stories of those with whom I share life and life encounters.

Weaver: At the conclusion of the upcoming General Assembly, you will transition into the role of CBF Moderator for 2019-2020. What are your hopes for CBF in the upcoming year?

Reese: I’ve been a part of CBF for a long time. It occurs to me that each of CBF’s executive coordinators has arrived at the ideal time bringing ideal gifts. Under the leadership of Paul Baxley, I am excited to focus on our congregations. I hope that CBF will spend an extraordinary amount of time in helping our congregations be transformative in their respective communities. I hope that we will highlight the stories of our field personnel and the transformational work happening around the world.

And finally, on a personal note, I hope that as a Fellowship we will assume the best about others in the movement. One of the disappointing things about church life is that when there is an apparent lack of information, some people tend to assume the worst. I think people of faith should do better and give each other grace when there seems to be a lack of timely information.

Weaver: How can Cooperative Baptists pray for you over the course of 2019-20?

What are you reading right now?

Whence and Whither: On Lives and Living by Thomas Lynch
Golden Child by Claire Adam
EVERYTHING WRITTEN BY FREDRIK BACKMAN

Learn more about the 2019 CBF General Assembly meeting this week in Birmingham, Ala. at www.cbf.net/guidebook2019. Keep up with news coverage, photos and watch Facebook Live throughout the week at www.cbf.net/Birmingham2019.