More than 150 children attended VBS during the summer of 2019 at Trinity Baptist Church in Raleigh, N.C. 22 of these were refugee and immigrant children who had been served by Welcome House.

A colossal nine-by-12-foot canvas hangs in the narthex of Trinity Baptist Church in Raleigh, North Carolina, bearing the painted handprints of more than 150 children. For each handprint, there’s a name and one God-given gift that each offers to his or her community—a prompt issued to every child who attended missions sessions at Trinity’s Vacation Bible School in June.

What the painting doesn’t show, however, is that 22 of those handprints belong to children who only just arrived in their community and who are fleeing violence, drought or famine on the other side of the world. They belong to children whose families have been cared for by Welcome House, a partnership to resource and resettle immigrants, led by Cooperative Baptist Fellowship field personnel Kim and Marc Wyatt. Trinity became an Encourager Church for the Wyatts earlier in 2019, says Lydia Tatum, associate pastor for ministry and outreach. As she explained, the congregation wanted to move beyond merely serving meals or preparing rooms at Welcome House’s reception home.

“The VBS lead team was looking for a mission emphasis as well as an over-arching goal for the week,” Tatum added. “This year the two went hand–in–hand in that it had been a goal of our entire congregation to connect the families who are touched by Welcome House to the life of our congregation, beyond just our serving them. We wanted to share life with them and help integrate our communities a little more, and it was the lead team’s dream to have the children come and be a part of VBS.” 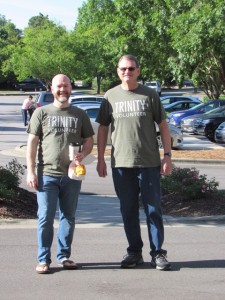 Volunteers at Trinity Baptist have worked with Kim and Marc Wyatt and the Welcome House ministry through their Encourager Church relationship, and wanted to go above and beyond their usual efforts through inviting refugee and immigrant children to Vacation Bible School.

Each night of VBS, volunteers from Trinity used the church’s two mini-buses to transport 22 children between the church and their homes at the Smithdale apartments in West Raleigh. Kim Wyatt and Trinity’s associate pastor for preschool and children, Katie Medlin, helped non-English-speaking parents register with their new address and family information, a sometimes– complicated process for recent migrants. The children—many of whom are food insecure, Tatum explained—would enjoy a pre-paid snack supper with the congregation upon arrival each night and begin sessions at 6 p.m., all in the care of Welcome House’s Student.Go interns with whom they spend their summer days.

As for mission education, most curricula hits too close to home for children who have recently immigrated to the U.S. and are typically living in poverty, Tatum said. CBF’s missions insert, !nspire, on the other hand, helped Trinity bridge the socio-economic gap and focus on asset-based community development, she explained. Tatum had a missions focus that affirmed the gifts and calling of every child, not just those who already belonged to Trinity.

“We focused on asset-based community development; but we talked about how we all have something to offer; we all have gifts; and we all need each other,” Tatum said.

To illustrate their unique giftedness, Tatum distributed pencils, paper and crayons among each grade so that no single child had enough to draw his or her own full picture. Then, she instructed the group to produce a colored picture in spite of that. “For a few minutes they were a little frustrated because they didn’t have the stuff they needed; but eventually they discovered they could share the assets each had and work together,” she said. “They learned about cooperation. They learned that it’s important to use what we have because somebody else doesn’t have it; that we can all share and accomplish our goals together as a community.” 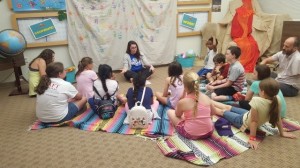 During VBS, children placed their handprint and one of their God-given gifts on a tapestry that now hangs in the narthex of Trinity Baptist Church.

The greater missions education, however, was simply the everyday interaction between native-born and immigrant children, Tatum said. Children from immigrant and refugee families were overwhelmingly grateful for a hot meal and an empowering week at VBS. And Welcome House continues to host adult ESL classes and kids’ clubs at three major immigrant communities in Raleigh. But children from North Raleigh, who already belonged to Trinity, were equally as empowered by their experience with peers of different cultures and backgrounds, she explained.

“It’s as much a benefit to our kids as it is to theirs that we do life together,” Tatum said. “That we see one another and share in these experiences.

“When we intentionally share life with people of different backgrounds, our children’s worlds open up. They form relationships with each other before prejudice or the difference of political affiliation kicks in. They come to know one another as people rather than as ‘refugee’ or ‘immigrant’ or someone who’s going to ‘drain our economy.’ Our children, from the very beginning, see that people come from different backgrounds, speak different languages and have different experiences while still being part of a vibrant community that can share in love and in the mission of God for the world.”

Learn more about and support the ministries of Kim and Marc Wyatt and the Welcome House network at www.cbf.net/wyatt.