Starting a new church can be difficult. However, pastors Kan’Dace and Fredricc Brock welcome the challenge. The couple have been co-leading The Message Church in San Antonio, Texas, after starting the church in April of 2018.

“Some of the joy of church starting has been being able to establish a new community,” Pastor Kan’Dace said.

“Our aim, our goal, is to change lives and change the world and to keep it real, relevant and relational in the process,” Pastor Fredricc said. 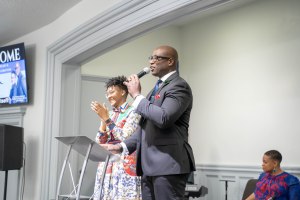 Pastors Kan’Dace and Fredricc Brock are co-leaders of The Message Church in San Antonio, Texas, which they started in April of 2018.

Partnership through CBF has been instrumental in aiding the couple as they move forward together.

“CBF has been tremendous in the affirmation that they provided for us, and then also that inclusion piece,” Kan’Dace said. “In San Antonio, being a woman in ministry is definitely tough…but being a part of CBF and going through the church starting process, me being a woman has not been an issue, and that is such a breath of fresh air.”

Fredricc affirmed that CBF’s support and coaching has been beneficial to their work.

“That’s probably been the single biggest asset for us being a part of the Cooperative Baptist Fellowship—just having that support network to really be there on a day-to-day basis and CBF providing the once-a-month coaching calls,” he said.

Both pastors come from a military background. Fredricc is a U.S. Air Force chaplain and Kan’Dace is a self-described “army brat,” and they have retired and active duty service members in their congregation. They strive to reach out to people who they say are not necessarily “unchurched” but have been “de-churched.”

“They may have grown up in the church and maybe walked away for a little while, or they were in transition from a church,” Kan’Dace explained.

In a diverse city like San Antonio, the pastors welcome people from a wide range of backgrounds.

“We are predominantly African-American, but God has been showing us that we’re becoming more multicultural, which has been really exciting,” Kan’Dace said. “We realize that it pushes us to look beyond what’s in front of us and address issues across the board.” 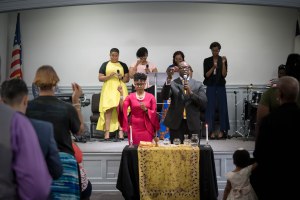 Pastors Kan’Dace and Fredricc Brock preside over communion at The Message Church.

While facing challenges, the couple has remained a united front. They use the term “lead pastors” and stress that if a congregation member goes to one pastor, they will get the same response as if they were to ask the other. Kan’Dace says that “Dr. Brock” (Fredricc) focuses more on the “big picture” of ministry while she works on the minute details, working in an executive role to implement larger ideas.

Despite leading the church, the pastors acknowledge the role that every congregation member has as a part of the church body.

“Everyone wants to be included in the decision-making process, and so that has been somewhat of a paradigm shift for us, because growing up for us, our pastors were really the authority from the standpoint that they made a lot of the decisions,” Kan’Dace said. “Now we’re realizing that everyone wants to be included in those decisions, so we’re really working as a team to lead the church.”

Fredricc serves on the Pan-African Koinonia Steering Committee which is a part of the Dr. Emmanuel McCall Racial Justice and Leadership Initiative. He acknowledges the part CBF plays  in key issues affecting people across the nation.

“One of the things that I appreciate most about CBF is the strides that it’s taking in the areas of racial reconciliation and justice issues—just being up front about the reality that no perfect church exists and until the Lord comes back, there’s going to be a distance that we have to go in that area,” he said.

Working with the Fellowship has had a direct impact on the way the couple carry out their ministry in San Antonio and beyond. The pastors say they appreciate that CBF does not come from a place of judgement or control but of love and support.

“We’re not micromanaged. We’re not held to this, ‘If you don’t have 10, 15, 20, 30 members each month, then we no longer support you,’” Kan’Dace said. “It’s like, ‘Hey, you establish the measure of success, and just know that you have partners around the world that are praying for you…’ We know that we have the praying partners around the world and continued support.”

Pastor Fredricc agreed that CBF’s support is having a direct impact in San Antonio.

“CBF is directly impacting us on the local level and we seek to support other CBF churches within the area as well,” he said. “CBF’s impact is being felt in a major way in the San Antonio area.”

“We realize that we can do more together than we can apart… how can we help one another be successful?” Kan’Dace said.  “It’s not just what are we doing in our own small corner of the world, but whatever we can do to move forward, let’s do it.”

Watch a video about the Brocks’ ministry below:

The Cooperative Baptist Fellowship is a Christian Network that helps people put their faith to practice through ministry eff­orts, global missions and a broad community of support. The Fellowship’s mission is to serve Christians and churches as they discover and fulfill their God-given mission. Learn more at www.cbf.net.