Elkin, North Carolina, is a town not known for its civil rights activism. The tiny textile town tucked into the Piedmont foothills of the Blue Ridge Mountains is more famous for the many vineyards that dot the gentle slopes between Winston-Salem and Boone. With a population of around 4,000 people, it is also overwhelmingly white (86%) with black residents comprising just under five percent.

But on June 2, Elkin joined hundreds of small cities and towns across the country that took to the streets to protest the unjust death of George Floyd, an unarmed black man, at the hands of Minneapolis police officers. In the same week, protests took place in over 140 cities and towns in at least 21 different states according to reporting by The New York Times. 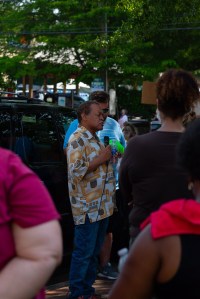 Rev. Wallie Hairston offers a prayer prior to a Community March on June 6.

While media coverage focused on larger demonstrations in places like New York City, Los Angeles and Washington, D.C., protesters also banded together in rural towns like Belfast, Maine, Paducah, Kentucky, and Petal, Mississippi. Like Elkin, many of these towns are predominantly white communities. They each drew anywhere from seven to several hundred protesters.

Indeed, one of the unique marks of the recent protests is their transcendence of geography, demographics, religious tradition and political ideology. It is a welcome change for black community members like Rev. Wallice Hairston, known as Wallie to his friends, who is a Pentecostal pastor and activist in Elkin, and who helped organize the protest in Elkin alongside West Caudle of the CommUNITY Project of the Yadkin Valley.  He was glad to see white community members as well as white clergy among the demonstrations.

“It erased a lot of residual feelings from my childhood to see the community come out and stand with us, alongside us and in front of us,” Hairston said.

Even in sleepy towns like Elkin, rural communities have their own histories of discrimination. Hairston traces the beginning of his activism all the way back to his days at Elkin High School when, in 1972, he protested with other students to demand better representation for black students. He experienced discrimination firsthand as well.

“I once had a police officer stop me and ask me why I was driving a nicer car than I should’ve been,” Hairston recalled. “I’ve always been an activist and had a sense of what’s right, even if no one else will stand up with me.”

“For so many years,” Hairston said, “I asked myself, ‘Where are my white clergy friends? Where are my brothers and sisters in Christ? I don’t have to ask anymore. They’re here.” 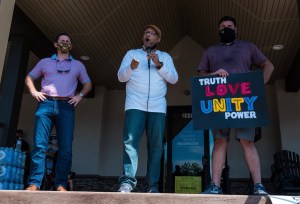 Rev. Mark Reece, senior pastor of First Baptist Church in Elkin, a CBF-partner church, is one of those white clergy showing up to protest with Hairston.

Social and political issues tend to be lightning rods that predominantly white churches in the rural South would rather not touch. That can put pastors in the tough position of deciding when, where and how to speak out. But for Reece, there was no hesitation. “As a local pastor, I feel as though I didn’t have a choice,” he said. “It’s my job to represent Christ. Jesus Christ was a person of color and was killed at the hands of the empire. If you take Jesus of the Gospels seriously, I don’t see how you could not show up for people of color who are being unjustly persecuted.”

Reece did not show up without bringing his congregation along first though.

“I went to the street corner with the church’s blessing for sure,” he said. In fact, Reece showed up to the protest at the urging of the youth of his church and the church’s associate pastor, Rev. Justin Bell.

Reece had also been doing deeper work with his congregation before the protests began. “August will mark two years for me at First Baptist. I have preached largely from the gospels since my arrival, frequently addressing racism and inequality,” he explained.

Reece was not the only pastor of a historic, “big steeple” church to join in the nationwide protests. Over on the other side of the Appalachian Mountains in the small college town of Morehead, Kentucky, Rev. Lauren McDuffie, associate pastor at First Baptist Church, joined protests alongside members of her church. 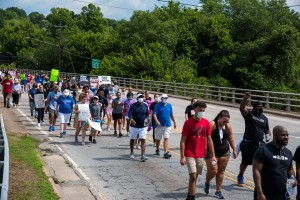 Morehead is a community similar in size and demographics to Elkin. McDuffie and other church leaders have been engaging their congregation in the work of racial justice for a couple of years.

“We have been talking about the Black Lives Matter movement from the pulpit and specifically talking about working for racial justice as a part of following Christ,” McDuffie noted. “It felt important to show up and act on what we’d been talking about.” According to local reporting, about 250 people showed up at Fountain Park in Morehead. McDuffie estimates between 15 and 20 of those were members of First Baptist.

Why these protests have taken place in small, rural and predominantly white communities just as they have in larger cities where racial injustices are more visible nationally may be due to many reasons. According to Buzzfeed News, some protesters point to the prevalence of racism and discrimination in communities of all sizes. Others see the racial injustices as interconnected with other pains that rural communities experience—unlivable wages, environmental degradation and lack of resources.

For Hairston, it is something more visceral than that.

“Everyone saw it for themselves. Until they could see it—the eight minutes and 46 seconds—until they feel the agony, they could think it’s not real. Now, the whole world knows it’s real. George Floyd was a father, a brother and a son. I think George Floyd calling out to his mama had a profound impact on families in rural towns and a number of people may have seen themselves standing there on that sidewalk.”

Both Reece and McDuffie recognize that while their work is not over, the protests have galvanized their churches to strive for racial justice. 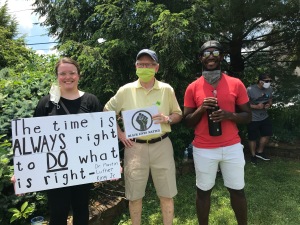 “We had an impressive number of people show up to the march and I think we’re set up really well to do some solid anti-racism educating this fall,” said McDuffie. A couple of reading groups have already popped up at Reece’s church, reading works like Jesus and the Disinherited by Howard Thurman. His church is also considering hosting another event like “Strangers to Neighbors” with a focus on racial justice and doing pulpit exchanges, where black and white pastors will preach at each other’s churches. “This is one of those areas where our church can have a greater voice,” Reece shared, “but before we have a greater voice, we have to listen to African-Americans. That’s the next step.”

Throughout this summer, the world is bearing witness to the largest demonstration for civil rights in history. From the inner-city neighborhoods to the mountain hollows and beyond, people are taking to the streets proclaiming that Black lives matter. Community activists and pastors are determined not to let the moment pass by.

“I don’t see us just having demonstrations,” declared Hairston. “I see a revival sweeping across the country because a change is coming.”

All photos courtesy of  The CommUNITY Project, Inc.