This post comes from Katelyn Foster McWilliams on the CBF West meeting on Jan. 27.

Valeria, whose family attends Iglesia Bautista, dives into a cupcake while taking a break from the games.

A group of excited children scurry around in a circle hoping to land beside the winning chair as the music stops. The lucky child throws her hands in the air with a victorious squeal as she skips over to the table of sweets. Picking out her cupcakes, she feels on top of the world. Or at least Douglas, Arizona.

This scene is stolen from the Block Party in Douglas hosted by CBF West on Jan. 27 at Iglesia Bautista del Sur Amistad. CBF West, composed of the 13 western states, chose to approach their annual meeting this year with a new perspective. What normally consists of members flying in, meeting and flying home, transformed into three days of service and building relationships on the border of Mexico.

Adalberto, 7, was riding his bike through the neighborhood with his friend Abraham when they stopped to join in on the fun.

Having an ongoing relationship with Pantano Baptist Church in Tucson, Iglesia Bautista worked together with CBF West in putting on the event designed to reach the surrounding community. They began by hosting a traditional Mexican dinner for CBF West on Thursday night. Friday brought the opportunity for everyone involved not only to collaborate in preparing and implementing the party but to get to know one another.

“There was a spirit of cooperation of everybody from CBF West and the local community,” said Rick Sample, one of CBF’s field personnel. “It was a wonderful missions experience that brought us together for the community. We didn’t just do it for them, but they did it with us.” 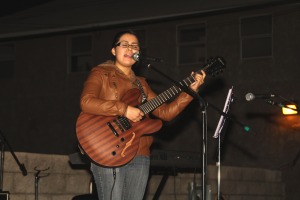 Giselly Aryayo leads the crowd in worship music. She has been attending Iglesia Bautista for 7 years and leads in worship every Sunday. When asked what her favorite part of playing music is, she answered simply "worshipping the Lord."

As the games and food settled down, Pastor Rolando Aguirre from Calvary Baptist Church in McAllen, Texas offered a dynamic and evangelistic sermon to those gathered in the parking lot.

Church member Joseph Rancón felt the community has been evangelized and the church has been revitalized saying, “This church has been lonely for the last six months, but today it looked like God was in our hearts.”

Before departing on Saturday, the Westerners gathered together for a debriefing and prayer session. Standing in a circle, they were asked to describe the successful weekend in one word. Three words that stood out were connections, conversations and community.

Connections
Located in a residential neighborhood, Iglesia Bautista used the block party as an opportunity to connect to its surrounding community. Residents from all over the area were attracted by the music radiating from the parking lot.

Seven year-old Adalberto stopped by to play games as he was riding his bike down the street with his friend Abraham. He could be seen jumping from mini-golf to ring toss to the hot dog station, but his favorite game was bowling.

As Rolando offered the invitation, a young man came forward with his entire family. Pastor Luis Aguilar of Iglesia Bautista explained how the church had been praying for this young man who had suffered a horrific accident months earlier. That night the young man and his family professed Jesus as Savior. In total, seven people came forward Friday night making a decision to follow Christ.

Conversations
Jesús, an elderly man who lives across from Iglesia Bautista, is unable to attend church due to health issues. Jesús brought his two grandchildren to participate in the Block Party but was hesitant to step into the crowd. While the two children played every game and won loads of prizes, Jesús sat on the sidewalk in a metal chair.

Rolando Aguirre talks with Jesús who brought his two grandkids. They live across the street.

Rolando approached him and began a conversation, which lasted the entire time his grandkids played. He was hesitant to join the party, so Rolando reached out to him. During their conversation, Rolando was able to share the gospel with Jesús and encourage him in the work of Iglesia Bautista.

CBF West felt this service project also allowed them to connect with one another. Instead of sitting around a table having conversations that only pertain to CBF agenda, they were able to get to know each other and develop friendships.

Community
The three days in Arizona exemplified the definition of community. Participants came from Hawaii, California, Idaho, Arizona and Texas. Japan, Korea, Columbia, Ecuador, America and Mexico were present. Ages ranged from 8-87. English and Spanish were equally spoken, yet everyone came together for the purpose of spreading the name of Jesus Christ through word and deed.

Joy Yee, moderator of CBF West, explained that the purpose of doing things differently this year was to build relationships and widen the community in order to be a stronger presence in the West. The goal was to expand on already existing relationships, such as the relationship that Pantano Baptist has with Iglesia Bautista.

As pastor, Luis Aguilar confidently expressed the success of the event explaining the relationships formed and the revival within the church. Offering a heartfelt thank you at the debriefing meeting, he called on Rolando to translate his Spanish. “We understand we are not alone in the vision. We understand we are a big, big family from other places working together with these events. No matter the language, we are on the same team. When we work together we can help to change other people’s lives. That’s the most important,” he said.

The small community of Iglesia Bautista del Sur Amistad in Douglas, Arizona has now expanded to 13 states and countless churches. CBF West created connections, engaged in conversations and enriched the community. God was in the hearts of all involved.

Live out west and want to connect with CBF? Get in touch with Glen Foster, coordinator of CBF West, at glenfoster6@comcast.net. You can also visit http://www.cbfwest.org/.