First Baptist Church of Richmond hosted an intimate gathering at the historic Pusey House Saturday evening, April 20, for local pastors and supporters. Paynter shared with the group her hopes and dreams for the future of CBF.

“My dream for CBF is that we become the most vital and most vibrant religious community in the United States. I want to strengthen our voice here and around the world,” Paynter said.

“That’s my pledge, to be in this with you, as partners, to listen, to organize. We’re going to have a well-run organization that is built for the future. That is my commitment, to make that transition for CBF, to work with our partners in the most productive way possible.”

Paynter also expressed her appreciation to the group for their welcome and support. “I’m

so grateful that you have welcomed me tonight and I feel so blessed by the welcome that I’ve had throughout the whole Fellowship. And it’s really not about me; it’s about what we can do together. People are joyful and hopeful about that across generations.”

On Sunday, April 21, Paynter offered a word of welcome and gratitude during both morning services at the church. “Your commitment and leadership is known, not just here but throughout the world,” Paynter told the congregation. “It is an honor to be here today. And I stand in gratitude to you. Thank you for your hospitality to our Fellowship.”

First Baptist’s senior pastor Jim Somerville expressed his excitement to the church about the future of CBF under Paynter’s leadership. “In 10 minutes at the reception last night, I think I got more inspiration from Suzii Paynter than I’ve gotten from anybody in a long time. It made me want to get out of my chair and get on with the mission,” Somerville said.

From Richmond, Paynter traveled to Norfolk, Va., for a dinner Sunday night at Freemason Street Baptist Church, where she received a warm welcome from pastor Steve Jolly and answered questions from the congregation. 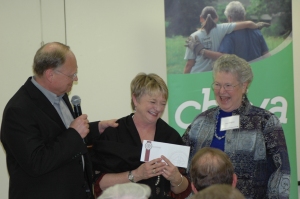 Larry Haun presented Paynter with a $10,000 check to support CBF missions and ministries. “We challenge everyone to join in because to do what she’s talking about doing is going to take money, more than we have given before, giving better than we’ve given before, all of us together, to be able to accomplish that,” said Haun.

“We affirm CBF’s mission that seeks to help and equip churches to discover and fulfill their God-given mission. We affirm CBF’s vision of being a movement of congregations bearing witness to the Gospel not just locally, but throughout our nation and the world,” the letter read. 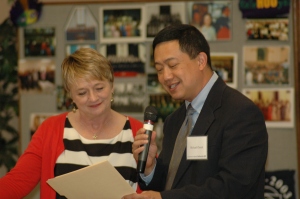 congregational governance, the participation of women and men in all aspects of church leadership and Christian ministry, and religious liberty for all people.”

In the letter, University Baptist pledged to pray for CBF field personnel, promote and collect the CBF Offering for Global Missions, participate in CBF-sponsored ministries and attend CBF regional and national assemblies.

This letter follows the 2012 Task Force Report’s encouragement for congregations to embrace their identity by writing a letter that details the church’s partnership with CBF. “I would encourage other CBF congregations to consider doing this, too, as we all get together and affirm our identity,” said Cheuk.

Paynter has been accompanied on this five-city tour by James R. Smith, CBF Foundation president, and Rob Fox, CBF Virginia field coordinator. “All of the meetings in Virginia have exceeded our expectations. We’ve found a really engaged CBF community that is eager to work with our new leader, Suzii Paynter,” said Smith.

Fox added, “I wish each and every one of our church leaders could have been on tour with us to hear Suzii Paynter articulate her hopes and dreams for our future together. For those who were able to participate in the CBF tour, they can offer a witness to Suzii’s energetic spirit and the groundswell of excitement we have heard about the future of our Fellowship.”

She will travel to North Carolina April 30-May 2 for another five-city tour, visiting CBF churches and supporters in Asheville, Winston-Salem, Greenville, Raleigh and Charlotte.

5 thoughts on “Paynter meets with CBF pastors, churches on five-city tour in Virginia”