One Christmas, God used the African English Bible study of a Dutch Baptist church to reach a Polish woman and a Moroccan man. This is partly how: 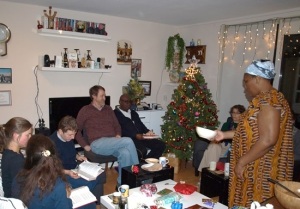 My husband Keith Holmes and I are actually in Europe to serve as resource coordinators for the Romany community. One of the main resources Keith coordinates is Scripture in forms that Romany can easily access, for example, dramatized audio recordings or dubbed Scripture videos. It really makes a difference to hear the Word in your own language. We had just returned from a two-month recording project in Poland. It felt good to be celebrating Christ’s birth in our own heart language (English).

The Africans had also invited Anne, a young Dutch woman who had been part of the group in the past. Anne asked if she could bring her friend Kaya. Kaya had spent some time working in sub-Saharan Africa. Certainly! The more the merrier! When Kaya showed up, she regretfully explained that she couldn’t stay long because her mother was waiting out in the car. The African hosts urged Kaya and Anne to invite the mother in to join the party. The mother, Margaret, did.

Margaret, who is Polish, sat near Keith. They struck up a conversation about Keith’s recent time in Poland. Margaret had grown up Catholic, had been searching for more than her upbringing offered, and had been attending a Protestant church here. She had many questions about Catholics, Protestants, Reformed and Baptists. She listened attentively to Keith’s mini-course in church history and expressed an interest in visiting our church’s other English Bible study since that one meets in the town where she lives (20-25 minutes away).

Mother and daughter came to this Bible study, which I attend. They enjoyed it, even though the subject was the weighty book of Hebrews. They had many questions which were answered in Dutch as well as English. Margaret planned to return, since we all were willing to listen to and answer the biblical questions which her pastor was not keen on entertaining. In fact, after all her years of church-going, Margaret still did not know where to find the book of Hebrews in the New Testament and, before she came to the first meeting, actually thought that we were studying Hebrew, the language. Yet she still came.

Now I would find all of this remarkable enough, but there’s more. Remember Kaya, who had worked in sub-Saharan Africa? It turns out Kaya had also taught English as a volunteer in Morocco. Many missionaries, including several CBF field personnel, were kicked out of Morocco. God wasn’t kicked out though.

While there, Kaya became friends with the young man who coordinated the volunteer teachers. She challenged him to examine spiritual options and not just choose Islam because his parents were Muslim. Consequently, he began reading the Bible, beginning with the Old Testament. He had many questions which Kaya and Margaret could not answer. Kaya requested prayer for him. We mentioned to her that our church supports a Moroccan/Dutch couple who work with Moroccan immigrants in Europe. She asked to be put in contact with them.

This Moroccan Christian e-mailed back that he would be happy to answer any of this young man’s questions. In fact, that is how he himself became a Christian—via an English teacher. The young man responded enthusiastically.

So this is how God works: A Christian Cameroonian family in the Netherlands is responsible for a Moroccan they have never met or even heard of being in correspondence with another Moroccan about Christianity via a Polish-Dutch girl these Africans have only met once. This same group of African Christians is responsible for a Polish woman being linked up with a Bible study in the Dutch village where she lives via an American she only met once. Keith and I were in the middle of it because the CBF Offering for Global Missions provides us with long-term presence, not just among Romany but also at “home” in the Netherlands.

To learn more about how you and your congregation can partner with field personnel like Keith Holmes and Mary Van Rheenen through participation in the CBF Offering for Global Missions, visit www.cbf.net/OGM.