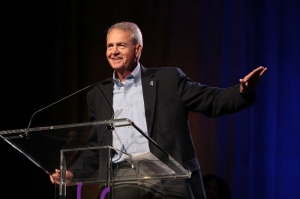 Doug Dortch, senior minister of Mountain Brook Baptist Church in Birmingham, Alabama, is serving as CBF Moderator for 2016-17 as the Cooperative Baptist Fellowship celebrates 25 years and looks toward its next 25 years together.

Dortch is a gifted minister, having served churches in Kentucky, Florida and Alabama, and has a deep network of Baptists of every flavor from his time serving in churches and serving on the Representative Assembly of CBF of Florida and the CBF Coordinating Council before joining the CBF Governing Board.

Recently I had the chance to connect with Dortch and learn more about his calling and hopes as we enter this year of celebration as a Fellowship.

Tell me about your background. Where did you grow up?

I am a native Alabamian, converted through the ministry of a large Baptist church in Mobile, Alabama, which afforded me the opportunity to grow up with every program available to young Baptists. My family later moved to a small town in West Alabama, where in the York Baptist Church I was fortunate to be nurtured more closely by church and community leaders who took faith and everyday life extremely seriously. I’ve been blessed to have both large and small church experiences, and to see the strengths and challenges of each.

Who were important influences in your development as a leader and pastor?

I hesitate to list specific influences, because there have been so many that I fear leaving some out, but at the top of any list has to be my Baptist Student Union campus minister, Bob Ford, at my alma mater, the University of Montevallo. He saw gifts in me that he encouraged me to apply to ministry settings, such as my first ministry position as the summer youth worker at the First Baptist Church of Vernon, Ala.

The pastor of that church, Buddy McGohon, was a superb model of patience, kindness and steadfastness. In particular, he taught me how to manage the highs and lows of pastoral ministry, and to focus on being faithful in the process. When I returned to campus that fall, I began to pay even more attention to my college pastor, Dub Steincross, who modeled a combination of courage and compassion in his pastoral ministry that I have not seen in many other pastors, even to this day. During the next three summers in my college years, I worked as the student associate in the Department of Evangelism for the Alabama Baptist State Convention, where the director, Otis Williams, assigned me to all kinds and sizes of churches throughout the state, and I learned to appreciate the rich diversity in Baptist life. From there it was on to Southern Seminary, where each of my professors influenced my ministerial development, and especially my supervisor in the Ph.D. program, Bill Tuck, who helped me to understand even more fully the “two-sided coin” of preaching in terms of its joys and its burdens.

As far as leadership, I can’t think of a more influential model in my life than my father, a merchant, who will always be my foremost example of the need to be a person of integrity, treating everyone with equal respect. I will always be grateful to him for supporting my call to pastoral ministry, even when his desire was for me one day to take over the family business. I think he found great comfort from the many times I told him that nothing could have prepared me for church work better than those years I spent working in his store.

Could you share about your calling to pastoral ministry?

I honestly can’t remember ever sensing a desire to do anything else. From an early age, I felt a tug toward pastoral ministry, which I attribute to the strong ministries of the churches in which I grew up. I came along at a time when young people were challenged at every retreat and revival to give serious consideration to “full-time Christian ministry.”

Without question, it was a different day, and I benefitted from coming along at a time when pastoral ministry was considered to be a much more respected profession than I sense it is today. That’s not to say that I consider my calling more special than anyone else’s. It’s simply what I sensed God calling me to do, and I feel most privileged to have been able to spend these almost 40 years in what I honestly do consider to be the most wonderful work in the world.

How did you connect with CBF?

I was a part of CBF from the very beginning. As a young pastor, I participated at all levels of state convention life, and was always in attendance at the SBC annual meetings. When the Fellowship formed in 1991, I was on board with my support. In those early years, I served on the Theological Education Ministry Group of the CBF Coordinating Council, and was active in Florida CBF life when I was serving in that state.

What do you bring to the table as CBF Moderator?

I’ve been blessed to have served in ministry long enough to know a good number of people in Baptist life through the leadership opportunities I’ve been privileged to enjoy in both CBF and SBC circles. Since most CBF churches are actually dually aligned, as is the one in which I presently serve, I can appreciate the tension that many
pastors in those churches have to manage.

At the same time, I have always worked for constructive change in every church and denominational body of which I’ve been a part, so I understand how such change can best take place, without leaving the majority of people behind or compromising the heritage of which they are a part. Working for that sort of change is always a tricky undertaking, but for me it’s what makes ministry most fulfilling.

How do you think the role of CBF Moderator will differ in this unique year
as we celebrate our 25th Anniversary?

Anniversaries such as this are important markers for launching into the good future God has for us to know. While we’re never bound by our past, we certainly would do well to learn from it so that we might use it as a springboard for the years to come. I see the Moderator’s role in this signal year as one of keeping before the body the many ways we have managed to advance the cause of Christ by being his presence in transforming ways, and to remind us that regardless of what challenges we will face in the future, his grace has provided us with sufficient resources (in every sense of that word) to overcome the challenges and do even more to bring God’s kingdom purposes to pass here on earth.

What is your vision for the future of CBF?

I envision CBF as the model for cooperative ministry, not only for Baptists but for other denominations and religious bodies as well. The values that make up our life together — soul freedom, Bible freedom, church freedom and religious freedom — resonate with people today perhaps more than ever.

I see the key to realizing this vision as maintaining our commitment to Global Missions, which is the glue that has held us together from the very beginning of CBF life. As the center of Christianity shifts from the first world to the third world, CBF is in a position through the solid contacts we’ve established with partners around the world to support the spread of the Gospel so that as their work becomes stronger, so does ours in the process.

What prayers would you ask of Cooperative Baptists — for you and the Governing Board — during your term as Moderator?

I would ask that people pray for the Governing Board and me to have wisdom and courage in this present hour. Leadership is not easy in any setting, and certainly not in one as diverse as ours. I would ask also that people pray for us in leadership to be sensitive to the Holy Spirit’s prodding and to be able to articulate that nudging to others in CBF life, so that even if they disagree with a decision we make, they will know that it came from a pure heart, one that desires nothing more than to see God move more mightily in our midst.