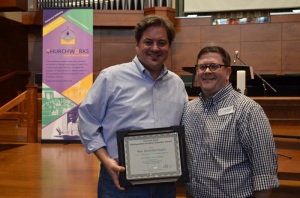 David Burroughs, president and founder of Birmingham, Ala.-based Passport, Inc., was honored with the 2017 Jack Naish Distinguished Educator Award, named after the longtime minister of education at Wieuca Road Baptist Church in Atlanta and awarded to one minister in the Fellowship each year for outstanding leadership and achievement in Christian education.

“It is an honor to celebrate the achievements of David and Passport with this award,” said Josh Speight, CBF’s Missional Congregation Resources Manager and lead organizer for the annual ChurchWorks conference. “As a former Passport staffer and now a parent who sends his own children to camp with this essential CBF partner, I am happy to say to David ‘thank you’ for educating so many young lives each summer, helping them to put their faith to action. David, through Passport, is a practical educator, encouraging children, youth and adults to connect with God’s creation in hands-on ways.”

“Over the past 25 years, David has focused a remarkable vision for shaping the lives of adolescents and young adults toward vocations of significance through Passport,” Marshall wrote. “His unabashed support of fledglings in ministry, artistic excellence, and reflective theology are gifts he has lavished in the CBF orbit — and beyond. He has broken ground as a Christian educator by empowering staff and students to risk new forms of discipleship and global engagement.”

Sarah Murray, minister to families with children at First Baptist Church, Griffin, Ga., and past moderator of CBF of Georgia was honored with the 2017 Young Baptist Leadership Award. The CBF Young Baptist Leadership Award is presented annually to a clergy or congregational leader who represents a growing interaction with and support of the Fellowship and has demonstrated ministry to peers and colleagues of every generation.

When presenting the Young Baptist Leadership Award, Speight shared read aloud written endorsements from numerous colleagues of Murray, who also is a member of the leadership team for the CBF Children’s Ministry Network.

“Sarah is a remarkable young leader,” wrote Frank Broome, coordinator of CBF of Georgia. “She understands church craft and has the instincts necessary to get things done. She is an optimistic realist able to move from what is to what should be with both wisdom and grace.”

Bill Hardee, pastor of First Baptist Church of Griffin, described Murray as an effective leader with a positive approach and expansive ministry vision.

“Sarah Murray has a remarkable gift-mix which enables her to be an effective minister/leader,” Hardee wrote. “She is thoughtful when she plans her articles and sermons and speaks with warmth, energy and enthusiasm. Sarah is a meticulous planner who envisions new programs and has the ability to bring them into the complex world of Christian ministry. She is a team player in staff relations and a consensus builder when listening to the teams she supervises and positive in her approach to others and a great listener.”