By Aaron Weaver and Carrie McGuffin 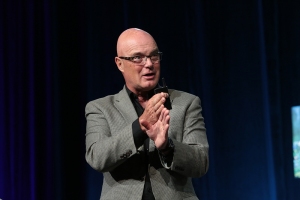 Popular author and theologian Brian McLaren challenges Cooperative Baptists to celebrate the last 25 years and look ahead to the next 25 years.

ATLANTA — Stepping out in faith not knowing the destination is part of the story of the Cooperative Baptist Fellowship, popular author and theologian Brian McLaren told nearly 1,500 attendees Thursday evening at the 2017 General Assembly.

“Celebrate how far you’ve come — you have made the road by walking,” McLaren urged the crowd.

McLaren emphasized that the Fellowship has blazed a trail since its founding in 1991, walking and creating an unknown road together.

“Without realizing what you were getting yourself into, you stepped out and had no idea how much change could happen in 25 years.”

CBF made a decision in 1991 to try and offer a different model of Christianity, McLaren said. At 25-years-old, he added, the denomi-network is still in the making and should not and will never be finished.

“You aren’t at the top of the slippery slope,” said McLaren, referencing those who criticized CBF in its founding era. “You are making progress on a long, upward journey. To have a woman [Executive Coordinator] is a pretty remarkable thing. To be a place where you are allowed to talk about the need for racial reconciliation, it is an important start. We have a way to go…you have a long adventure ahead.”

“Keep celebrating,” he added, noting that the Fellowship is well-positioned as a graceful and gracious network. McLaren challenged the Assembly to look ahead to its 50th anniversary. He expressed hope that there will be young leaders among the crowd — “30-year-old leaders who right now would be our five-year-old children.”

Living in these essentials requires courage, challenging the status quo, loving neighbor, loving self, loving creation and forming disciples to be agents of transformation, he said.

“This is hard work,” McLaren said. “Instead of judging people, it is welcoming them to the table and washing their feet. Instead of conforming to the status quo, it’s about being an agent of transformation for the poor, oppressed and imprisoned. The Great Commission is saying ‘I am involved in the healing of the world.’

“It’s about making disciples. It’s about forming lifelong disciples, people who follow a rabbi teacher, who imitate his example and teach others the art of living in his way.”

The Thursday evening session featured a pre-worship concert led by musician and composer Joseph Martin and an ensemble. With worship centered around the Fellowship’s 25th Anniversary guiding theme and scripture of 2 Cor. 5:14 — Christ’s love compels us — the service began with a special litany voiced in English, Swahili, Turkish, Spanish, Dutch, Telugu and Igbo.

Former CBF Moderator Emmanuel McCall led attendees in a time of prayer to consider the blessings bestowed upon the Fellowship over the past 25 years.

“We have given cooperatively to the support of the mission cause,” McCall said. “We have been encouraged, inspired and sent forth by powerful preaching, by the witness of the Holy Spirit, by blessings of music such as tonight. It is our honest prayer that tonight you will again experience these blessings which have been ours for the past 25 years. We hope you will go out with the feeling that we are God’s people and we are doing God’s bidding.” 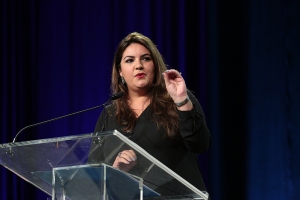 Xiomara Reyboras Ortiz shares why she loves the Fellowship.

Xiomara Reyboras Ortiz, a Latina lay leader from Florida, reflected on the three most important and transforming questions she has been asked in her life: Will you marry me? Do you really want to marry a Baptist? What have you found in CBF that makes you stay?

“The answer to that last question brings me great joy,” Ortiz said. “I have learned to love CBF through the eyes of my husband, Rubén, a pastor who found healing for his ministry with open hearts and open arms when he needed them most.”

Ortiz shared her love for the Fellowship which now reaches beyond her introduction through her husband, who has been appointed as CBF Latino Field Coordinator.

“In CBF, I have found authenticity and beautiful hearts of this leadership. I have found a place where women in ministry are celebrated and honored. I have found speakers and preachers that make me proud of this denomi-network. I have found sacred spaces of worship where we can all experience God’s grace.”

All of these things are aspects of CBF that Ortiz loves, yet, what makes her stay, she said, is the people of the Fellowship.

“What I’ve found in CBF that makes me stay is people — people who I can call friends, who join us in this adventure of building God’s Kingdom together. I found familia.”

CBF field personnel Jessica and Joshua Hearne brought greetings to the Assembly from Grace & Main Fellowship, the ecumenical and intentional Christian community where they serve in Danville, Va., sharing life and breaking bread with those experiencing homelessness, poverty, discrimination, hunger and addiction.

“On behalf of all our brothers and sisters at Grace & Main Fellowship, we want to say thank you for giving to the Offering for Global Missions,” Jessica said. “It is because of Cooperative Baptists that we are able to take the leap of faith to do the work of Grace & Main full time.”

“These are your missionaries,” Paynter told the crowd. “We’ve seen their stories and we’ve all commissioned them together. They are doing so much but there is so much more to be done. You are welcomed and encouraged to make a personal gift, but that’s not really our main focus. What I really want you to do is to be a missionary in your own church — to share the needs of refugees and our new neighbors at home. Share the impact that you and your church can have by supporting CBF.”

Say ‘yes’ to welcome refugees, feed the hungry and share the Gospel one person at a time. Give to the CBF Offering for Global Missions here.

CBF is a Christian network that helps people put their faith to practice through ministry efforts, global missions and a broad community of support. The Fellowship’s mission is to serve Christians and churches as they discover and fulfill their God-given mission.

One thought on ““You’ve made the road by walking,” McLaren tells Cooperative Baptists”