What happens when the efforts of the Cooperative Baptist Fellowship are combined with the peacemaking practices of the Catholic Workers Movement, a blues-playing Mennonite pastor and international partners from Mexico City?

A “beloved community” is formed, according to 28-year-old pastor and Truett Seminary graduate Cole Chandler. Chandler says partnering with people from various faith communities, races and nationalities helps create this “beloved community,” a term popularized by Martin Luther King, Jr., as the vision for a just and healthy society.

Beloved Community Mennonite Church (BCMC) is the brainchild of Mennonite pastor Vern Rempel. After finishing seminary in Waco, Texas, Cole Chandler and his wife, Kaylanne, moved back to her hometown of Denver, Colo., and attended Rempel’s first church. One day over coffee, Rempel told Chandler he was leaving their church to start a new one.

“He shared his vision for the church, and it matched mine — but maybe 30 years further down the road,” Chandler said. “His sense was that it was time to move on from success and career-building, to ‘living inside the container he had constructed,’ and to be in authentic community.”

The Beloved Community sign welcomes the community to a weekly lunch and worship service at Mayflower Congregational Church, where the congregation meets.

“We didn’t set out with a blueprint,” Chandler said. “We have dreams, but they’re not prescriptive. We want to see what emerges.”

Chandler is particularly excited about a church partnership with a couple from Mexico City and the building of a tiny house village for people experiencing homelessness in Denver.

Last February, BCMC welcomed a Mennonite couple from Mexico City who wanted to work with immigrants and refugees in the United States. BCMC hosted the couple who worked at a hospitality center across from the Immigration and Customs Enforcement buildings where detainees were held, helping families integrate into the community, connect with family and find apartments.

“One of the cool things about their being here is that they helped integrate marginalized peoples into the life of our congregation. At one point last year, we had five different households in our small congregation offering hospitality to displaced people without homes:’ Chandler said.

Chandler noted that although BCMC is small in size, because of its flexibility the church was able to work with the couple — something which might have been harder with a more established congregation.

Another church initiative arose out of a response to Denver’s controversial urban camping ban which critics say criminalizes homelessness. The ban makes it illegal to camp in public areas, something which Chandler says pushes homeless neighbors
to the fringes. “We also have hardly any affordable housing,” Chandler noted.

This year, Chandler joined an organization called the Alternative Solutions Advocacy Project (ASAP), a cross-section movement of business personnel, advocates, homeless people and faith leaders. ASAP has brainstormed alternatives to the camping ban which would welcome people into a safe space, especially needed during cold, winter months. According to Chandler, Denver officials initially were not interested. However, after a video of a police officer taking a blanket from a homeless person went viral, the mayor reached out to the group in order to find a solution. “Our plan was to create a safe space owned by a community,” Chandler said.

The Hansen family and their dog attend the annual pet blessing on the feast day of St. Francis of Assisi at Beloved Community.

ASAP is in current negotiations to create Beloved Community Village, a community comprising tiny homes for formerly homeless residents. Chandler reiterates that BCMC’s adaptable leadership style allows them to work on projects like the tiny home village. “We have the opportunity to take risks,” Chandler said. “Our church is not even two years old, and we’re right in the middle of this village project.”

Although Beloved Community has “Mennonite” in its title, it has close ties to the Catholic Worker Community and is a CBF-partner church.

“What if we were a Mennonite church with Catholics which was also Baptist?” Chandler said. “It’s the ‘yes and …’ kind of idea. Why choose ‘either or’ when both fit?”

Although he no longer lives in a predominantly Baptist area, Chandler acknowledges that maintaining his roots is a priority. “I was raised and educated by Baptists,” Chandler said. “An idea that is really important to me is the idea of holding that tension — of not needing to cut ties or move separate ways just for the sake of it.”

Chandler talks about how Beloved Community has tried to uphold traditional practices while leaving room for innovation. This is manifested in several ways, including the addition of blues music, stemming from the African-American roots tradition. 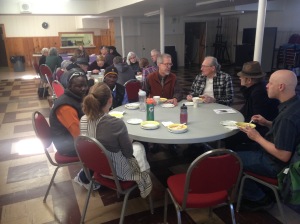 Beloved Community members gather in the church basement every Sunday at 12:30 p.m. for a soup and bread meal.

“Vern is a blues pianist. The thing about playing the blues, is that you have to understand rules of playing music first, before you can adapt and break them.” Chandler said. “We have great appreciation for tradition, but we are innovating within it. We are trying to enliven old practices so that they may form and reform us all.”

Another tradition the church follows is that of “courage and renewal,” based on Quaker teachings and the writings of author Parker Palmer. Palmer teaches the practice of a circle of trust where folks gather to be “alone in the context of community.” Attendees sit in the same room, but apart from one another, facing a centerpiece such as a candle. They focus on certain touchstones such as “trusting and learning from silence, being fully present and grounding their gathering in reflections on the season.”

The practice might include a poem, song or piece of art. After a period of silence and reflection, participants will “speak into circle,” about what they are experiencing without talking directly to one another or responding to what someone else has said. This practice is used to show the different perspectives surrounding the same object. At BCMC, they do this as a small group on Tuesday or Thursday nights with occasional retreats.

“It’s a new way of getting to something old,” Chandler said. Chandler said it is not always easy being a pastor of a new church start, especially since he and his wife both have full-time jobs. However, he maintained that receiving only a small stipend has added creative freedom to his work, 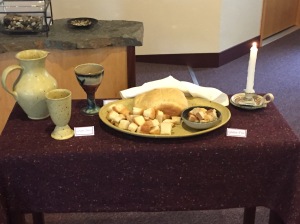 Beloved Community celebrates Eucharist each Sunday with homemade bread and wine made from grapes pressed by the community, as well as juice and gluten-free crackers, making a table where all are welcome.

“I definitely envy pastors who get to focus all their time and energy on their churches; but, by not taking a salary, I’ve been able to take risks and explore new opportunities,” Chandler said. He is eager to explore connections with the Catholic Worker Community, Mennonite partners and city advocacy groups.

“For me, the most important aspect of my faith is the way it shows up in the world. I want a sense of community, simplicity and peace. Following Jesus necessitates those kinds of ethics,” Chandler said.

Despite the challenges of having two vocations and working within different denominations, Chandler said he finds a culture of hospitality in the work he does. “In our courage and renewal small group, there is a touchstone we use that says, ‘let the beauty you love be what you do,”‘ Chandler noted. “It’s one of our rules of life — the beauty that I love, shaping the way I’m entering the world.”