NOTE: This is the first of a multi-part series of articles on The Angela Project Conference held September 11 in Louisville, Kentucky.

The Angela Project, hosted by Simmons College of Kentucky and Simmons President and St. Stephen Church pastor Dr. Kevin Cosby, aims to assist African-American institutions and promote African-American prosperity and will commemorate the 400th anniversary of black enslavement in the United States in 2019. This September 11 gathering was the first of three annual conferences focused on racial justice, and was held in conjunction with the meeting of the National Baptist Convention of America International, Inc.

“We are glad that you are here. If we are in our own silos and within our own echo chambers, then we cannot progress as a people and as a nation. Thank you for being here and being open to new ways of thinking.”

Rev. Suzii Paynter (Left) and Dr. Samuel Tolbert (Right) participated in a panel discussion on racial justice, highlighting the recent partnership between CBF and NBCA in the aftermath of the Great Flood of 2016 in Baton Rouge, Louisiana.

In 2016, CBF formalized a partnership with the National Baptist Convention of America International, Inc., a fellowship of 3.5 million African-American Baptists with the goal of “building authentic and Christ-like community through shared work.” As this partnership took shape, the Angela Project was launched.

Named after the first known African slave to step onto American soil — Angela was baptized a Christian in her native home, Cosby said.

“The purpose of [the Angela Project] is to say that the church must speak prophetically to those who are in power, and to say that our God is a God of justice. The Lord’s Prayer is a community prayer. Not once do you read, ‘Give me this day. Give me daily bread.’ The Lord’s Prayer is ‘Give us this day,’ and black people are not having a good day and we have not had a good day since 1619. Give us — black people are part of the us — bread, and black people don’t have bread. The purpose of the Angela Project over the next three years is to awaken the church to be a voice for justice and to listen to the voice of emerging prophets who shall present to us.

“I would submit to you that the church witness is on the line today, especially for millennials. What we do as a result of what we hear in this conference will determine whether or not the church in America will go the way of the church in Russia because of its complicity to oppression,” Cosby said. 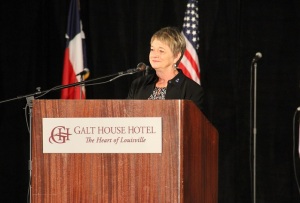 Rev. Suzii Paynter, Executive Coordinator of the Cooperative Baptist Fellowship offered greetings to those gathered for the Angela Project.

Rev. Suzii Paynter, Executive Coordinator of the Cooperative Baptist Fellowship, shared greetings, emphasizing that God is asking something of us all.

“I’ve waited for this day and I’ve prayed for it,” Paynter said. “I do believe on behalf of the Cooperative Baptist Fellowship, that we are called to this time. God is asking something of us. We live in a time of ashes. Ashes that have built up over generations and centuries. Ashes which have come and covered the embers of justice, of Christ’s way and of social advancement and social blessing that reflects the love of God, and Imago Dei. We live in a time of ashes.”

“Who are we as denominational leaders, but that we bring with us more than ourselves,” Paynter said. “Today, in bringing greetings to you, I bring to my fellow leaders signed statements from the Cooperative Baptist Fellowship, our signed statements for action, for breathing life and word and deed to ignite some flames and coals. Pastors signed on to a statement condemning racism and recommitting to pursuing racial justice — signed by more than 500 pastors and with so much enthusiasm.” 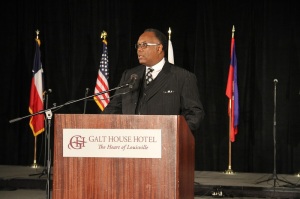 Dr. Samuel Tolbert, president of the National Baptist Convention of America International, Inc. addressed the gathering of Baptists, emphasizing that while it was the church that caused African-American and white Baptists to become divided “it ought to be the church to be the vehicle to bring us back together.”

“What we do agree on is that justice ought to be for everybody and that economic empowerment for all of our communities is important,” he emphasized.

“We’re living in a climate where people are being left out,” Tolbert added. “I am here today to be fully engaged in and fully listening to not only the information we receive today, but the steps we will take to make our country and to make our world better.”

Dr. Timothy Boddie, General Secretary of the Progressive National Baptist Convention, shared with the crowd about the unwavering commitment of PNBC, since its founding in 1961 to provide a spiritual home to Dr. Martin Luther King Jr., to “reengage the church in matters of social justice.”

Boddie closed his remarks with a question, asking the crowd, “Do you know what time it is?”

“Because the fact of the matter is, there is much work to be done,” Boddie said. “I was speaking to [CBF] pastor Joe Phelps, just moments before we got started here. He mentioned to me that we want to move beyond talking to action.

“This this is a wonderful start to move beyond talking to action. The question, ‘do you know what time it is’ was answered by Dr. Benjamin Elijay Mays at Morehouse College so many years ago when he would quote a poem…an anonymous poem that simply said these words, ‘In answer to the question ‘do you know what time it is,’ we have only just a minute, only 60 seconds in it, forced upon us, can’t refuse it, didn’t seek it, didn’t choose it. But it’s up to each one of us to use it. We must suffer if we lose it, give account if we abuse it, just a tiny little minute, but thanks to be to God, eternity is in it.’” 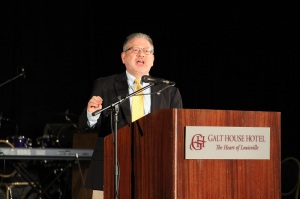 Dr. David Cassady, president of Baptist Seminary of Kentucky, offered greetings during the gathering in Louisville.

The Angela Project Conference also featured greetings from Dr. David Cassady, the new president of Baptist Seminary of Kentucky, who announced in late August a partnership with Simmons College of Kentucky to establish offices and begin offering a Master of Divinity degree in West Louisville at the historically black Simmons (HBCU) beginning with the Spring 2018 semester.

The Angela Project will continue its three year-arc in 2018 with a conference on black and white poverty, and in 2019 on the legacy of slavery in America to commemorate the 400th anniversary of black enslavement.

Prior to The Angela Project, CBF released a pastoral letter September 6 signed within just several days by more than 700 Cooperative Baptists, clergy and laity alike, condemning racism, white supremacy, bigotry and committing to confront “any form of racism we encounter — individual and systemic.” “Silence is an affront to the Gospel,” the letter said.

Read the historic letter titled “A Statement Concerning Racism in our Nation.” All Cooperative Baptists are invited and encouraged to endorse the statement. Become a signatory here.

View photos from the Angela Project gathering in Louisville here.