ATLANTA — “There was something in the water.”

So began the opening sermon of the New Baptist Covenant Summit in Atlanta, with an African-American and white pastor both from Greensboro, N.C., preaching in tandem. 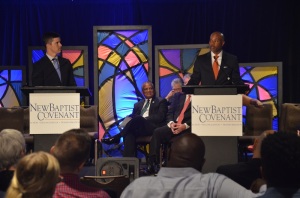 Dr. Darryl Aaron, pastor of Providence Baptist Church, shared a memory of his mother slipping away from his grandmother to take a sip of water from a “Whites Only” fountain during the heyday of the Jim Crow South.

“She had always drunk from the colored fountain,” Aaron recalled. “She said that on this day, she just simply decided to see what the other water tasted like.”

His mother took that sip only to find her mother grab, slap and warn never to do that again, Aaron recalled.

“Of course, her mother knew that whatever was in that water, it could kill black people,” Aaron said. “Black people don’t drink from the ‘Whites Only’ fountain. There was something in the water.”

Alan Sherouse, pastor of First Baptist Church in Greensboro, N.C., the same city as Aaron, recalled a childhood experience at his grandparents’ river home, where a neighbor chided his grandfather for allowing Sherouse to wear a Bo Jackson t-shirt.

“Isn’t there a white player that your boy can look up to,” Sherouse recalled the neighbor asking his grandfather.

“Jim Crow was nowhere to be found, it seemed, among the picturesque views out there on the river,” Sherouse said. “But standing there next to that river, there was something in the water, too. It’s always been in the water — drinking fountains and rivers…swimming pools or soda fountains. Maybe that’s why we find Jesus down by the water, so often, and certainly…calling those disciples and all of us, off the shore and into the water.”

Aaron highlighted the significance of water in the Gospels, noting that what troubles us today “is this stuff that’s in the water.”

“The Bible says the disciples are on a boat and the boat has been against the disciples,” Aaron said. “This is light for many in our world — injured, unsafe and forces are against them, and, I believe, I’m right to say that this is the condition today. Persons are being abused. They are unsafe, and there are winds of evil against God’s people. We are lost on the sea of life.”

“The water is hostile, unfriendly and outright harsh,” Aaron said. “When there are white supremacists and white nationalists walking up and down the streets with torches shouting…that they are helping the President make America great again…you’re living under unsafe, abusive and hostile conditions. It’s the stuff in the water that keeps causing trouble.”

Sherouse added that sometimes Christians only see the water when there’s a storm.

“We have to remember that Jesus is in there all along,” Sherouse said. “Early in the morning, Jesus came walking toward him on the sea as the text says. Now, if you spend some time with Jesus, you’ll find your way to the water. He’s always showing up there, down at the river for baptism or by the lakeshore pulling out the disciples to follow.”

The terrorism in Charlottesville, Sherouse noted, was “just the symptom of the water that is the system.”

“Jesus doesn’t test the water,” Sherouse continued. “He’s there before we ever arrive. He’s walking on the sea. …He’s waiting for us, while too many of us, especially in majority white congregations like mine, stand in [the] privileged position of the shore.”

Aaron recalled that in the Gospel, Peter got out of the boat and started walking on water toward Jesus, and upon noticing the wind became frightened and cried out for help.

“It took the wind for Peter to become worried and afraid,” Sherouse responded. “It took the storm for him to see what was there all along. He thought the wind was the threat, when something dangerous had surrounded his boat the whole time.”

“The more we assume that the problem of racism is limited to the Klan, the less we understand that racial domination is a collective process, and we are all in this game,” said Sherouse, referencing Bonilla-Silva. “We are all in this water together, and it’s true no matter where or when we launched our boat.”

We have to be able to identify racism in its various forms in society, Sherouse stressed.

Sherouse reflected on the tendency to “react to the station instead of the system, through the storm, instead of the sea.” He remembered reaching out to Aaron after the murders at Mother Emmanuel Church in Charleston, S.C., seeking guidance for his next sermon.

“I saw the wind and I felt the coming storm, and I called you,” Sherouse remembered.

He asked for Aaron’s advice on what to say, how to say it, and “what did the Gospel ask of me in that moment.” Sherouse said that Aaron paused and asked why he was putting so much emphasis on a particular moment.

“Have you not been preaching the Gospel every week,” Aaron pointedly asked his friend.

Aaron pointed out that Jesus made the disciples get into the boat and go before him to the other side.

“The time has come has come in America,” Aaron said. “It isn’t just an urgent moment, but it’s an emergency. We cannot shrink from moving confidently out into the choppy seas. We must get out of the boat and wade in the water.”

Hannah McMahan, executive director of the New Baptist Covenant challenged attendees to be creators and seek reconciliation and justice together.

“We’ve got work to do,” McMahan said to open the two-day summit. “We are here because we were made to be creators. We were made in the Creator’s image…and just as God created [us], so too we are here to create.”

McMahan added that the work of racial reconciliation doesn’t follow a pre-made template. “It’s not spelled out,” she said.

View photos from the summit here.

CBF is a Christian Network that helps people put their faith to practice through ministry eff­orts, global missions and a broad community of support. The Fellowship’s mission is to serve Christians and churches as they discover and fulfill their God-given mission.