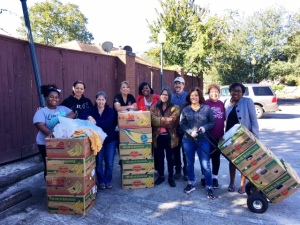 A team of six volunteers affiliated with the Latina Leadership Institute, a women’s empowerment program housed at Baptist University of the Américas in San Antonio, traveled to Houston to bless others. But they received a blessing in return, they said.

The Latina Leadership Institute team worked in cooperation with the Cooperative Baptist Fellowship and the Fifth Ward Community Redevelopment Corporation, a ministry of Pleasant Hill Baptist Church. Their base was Baptist Temple, a congregation affiliated with CBF and the Baptist General Convention of Texas.

They rearranged and moved almost 200 boxes of clothes and supplies, which the Fifth Ward Community Redevelopment Corporation will distribute to some of the neediest people in the area, reported Nora Lozano, executive director of the Latina Leadership Institute.

They also helped an elderly woman pack what was left of her belongings after she lost her home in the flood that accompanied Harvey, Lozano added. The woman’s diabetic son died when he could not receive dialysis treatments for two weeks because of the storm’s damage. 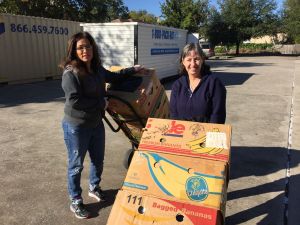 “For us, it was important to realize Mrs. C is a solid Christian and our sister in Christ,” she explained. “It was clear to us that we need to go again and do more for these members of the body of Christ who are suffering.”

“The experience of helping in the Fifth Ward was priceless,” noted Christina Rodriguez, office manager and assistant to the vice president for development at BUA, and a Latina Leadership Institute graduate. “I quickly realized this recovery journey is far from over.”

Rodriguez said the experience reminded her of advice offered by the Apostle Paul: “We who are strong ought to bear with the failings of the weak and not to please ourselves. Each of us should please his neighbor for his good, to build him up” (Romans 15:1-2).

Serving in Harvey’s wake provided two meaningful perspectives for Rhoda Vance, director of community relations and assistant to the president at Baptist University of the Américas, and a Latina Leadership Institute graduate.

“The first was helping victims of Harvey in whatever way possible,” she said. “The second was about serving others as LLI women.”  Learning “how God has empowered women to serve and give of ourselves to others is one thing; putting it to practice as a group of ladies who love God is another.”

“Never underestimate the resilience of women who trust in God,” Vance added. She noted the Latina women served alongside the Fifth Ward Community Redevelopment Corporation, which is led by women. And they worked with a strong, if vulnerable, woman whose life was changed by the hurricane. 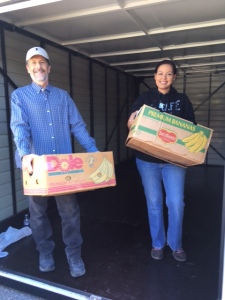 “Upon our arrival, she greeted us with a loving smile, and with a prayer of blessing, she sent us off,” Vance recalled. “Wow! That is God’s power when we trust him.”

“It was a pleasure working with our CBF partners, and the hospitality of Baptist Temple was more than we could have asked for,” Rodriguez explained.

Much more work needs to be done in Houston and across the region where Hurricane Harvey wreaked havoc, Lozano said. The Latina Leadership Institute coordinated its recovery efforts in cooperation with Butch Green, a CBF missionary based in Houston.

For more information or to volunteer: