HOUSTON – When the news of Hurricane Harvey’s devastation in Texas and Louisiana reached members of Second Baptist Church in Little Rock, Ark., they only had one question for Chris Ellis: “When are we going?” 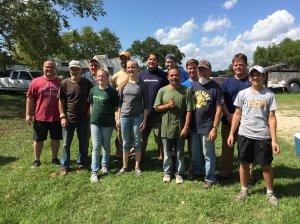 The team from Second Baptist included 11 adults and seven youth who were joined by homeowners who worked alongside them as a tangible “thanks.”

Ellis, minister of mission and outreach at Second Baptist, said that this kind of immediate response when natural disasters strike is embedded in the DNA of the church.

“We are very much an activist kind of church. Our faith is always pushing us out to do things.”

Since Hurricane Katrina struck in 2005, Ellis estimates that the church has responded to more than 50 natural disasters.

When Hurricane Harvey hit on August 25, it wrought destruction not seen in the United States for over a decade. The storm grew into a Category 4 hurricane before making landfall near Rockport, Texas. According to reporting by the National Weather Service, Houston was hit from two directions: the storm surge from the Gulf and also torrential rainfall from above, causing massive flooding in the streets. Over the course of two days, more than 30 inches of water inundated the Houston area, making August the wettest month ever recorded in the city.

In the aftermath, CBF mobilized its recovery efforts and asked Butch Green to coordinate the response in Houston. Butch and Nell Green have been serving in Houston since 2011 as field personnel, having served previously with CBF in Miami, Europe, North Africa and South Carolina.

When Ellis reached out to find out what Second Baptist could do, he contacted CBF sister churches in Texas, including Broadway Baptist in Fort Worth and Wilshire Baptist in Dallas. His contacts pointed him to Butch Green.

Green had already been meeting with church leaders and assessing the damage in the area, and contacted other church leaders in Houston to get a sense of what the most pressing needs were. As a result, he organized recovery efforts primarily in three areas of Houston: Rosharon, home to a growing community of Cambodian refugees; the Fifth Ward, an African-American community on the northeast side of the city; and South Houston, where many Hispanic residents live. Green said these communities were particularly vulnerable in Harvey’s wake, in large part because they were vulnerable before the storm. They continue to struggle even more in the aftermath since media coverage often overlooks them.

Many in the Rosharon and Fifth Ward communities moved back into their badly damaged and water-logged homes after Harvey struck because it was their only option.

“They weren’t the ones on the TV screens and they don’t have community leaders that can speak out for them,” said Green.

Driven by a desire to make an impact for the most vulnerable, Green found the biggest challenge in these areas was ensuring that homes, churches and community centers were properly cleaned out and safe to re-enter. He found that many, especially in the Cambodian refugee community, had simply cleaned out their homes and then moved right back in, despite the risk for mold.

“After a few weeks, the mold would start growing in these homes and they would continue to live in them.”

When Ellis’ team arrived on September 22, they came alongside Green’s work, focusing on the Rosharon and Fifth Ward communities. The group stayed at Baptist Temple, another CBF connection made through Green. For two days their group split into two different teams, one in the Fifth Ward and one in Rosharon. Their primary task was to remove drywall and carpet to prevent mold. In Rosharon, they gutted several homes as well as the First Cambodian Baptist Church that had been completely flooded.

Like many teams who embark on mission endeavors, the group from Second Baptist discovered that they were themselves transformed along with the people they had come to help. Ellis recalled the generous hospitality of the Rosharon community: “When I was at the Cambodian Baptist Church, their folks cooked this huge Cambodian lunch and this huge Cambodian dinner. Even as people are in the midst of their suffering, they hold on to their dignity and their hospitality.”

He found this to be true with all of the people they encountered in Houston, adding, “They were grateful for our coming, but they also worked alongside us, giving us a tangible ‘thank you’ in whatever way they could.”

After cleaning a home, the team from Second Baptist would pray with the family and then present them with a gift card to Lowes or Home Depot to soften the financial blow of home repair costs.

In large and small ways, Second Baptist found ways to lend a hand in Houston beyond sending the mission team.

“We had a bunch of folks from our church donate money to help and I was wondering how we could get it down there to help people out,” Ellis said.

His solution was the purchase of $600 gift cards to places like Lowe’s and Home Depot that could be easily transported to Houston and then used to soften some of the financial blow for these communities.

“A lot of those affected didn’t have flood insurance, so they were doing repairs with the costs coming out of their own pockets,” he noted. After cleaning a home, Ellis and his team would pray with the family and then present them with a gift card.

Some church members went to the extreme according to Ellis. “I had a church member go down who was a certified lifeguard. He took his boat down and was pulling people out of the flood waters.”

That kind of response was unsurprising for him. “These are the types of people we have at Second Baptist—the types who go down at a moment’s notice and pull people out of the floodwaters.”

CBF Arkansas poured in resources, volunteers and donations as well. With the help of Bill Coad in Helena, Roy Peterson and Herb Moore in Little Rock, and CBF Arkansas, two disaster response shower trailers were delivered to Texas—one to Baptist Temple in Houston and one to Beaumont. The monetary donations through CBF Arkansas for Hurricane Harvey relief efforts totaled nearly $6,000.

The disaster response team from Second Baptist is one example of the ways in which churches and CBF can weave together short-term projects with the long-term ministry efforts of field personnel. The Greens have been nurturing ministry in Houston among these affected communities for some time now. They have the presence and knowledge that is invaluable to churches like Second Baptist who are eager to help as soon as possible. 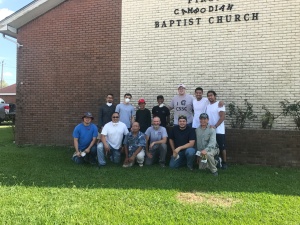 The team gutted the badly-damaged First Cambodian Baptist Church, as well as homes of those in the community.

The Greens will also be there after short-term trips such as these are over, continuing to provide presence, advocacy and support for overlooked and underserved communities in Houston. “It’s not just about the work,” said Green, “It’s about the relationships as well.”

Both Ellis and Green agreed that the recovery efforts must now pivot to a focus on rebuilding, which may require a more skilled volunteer pool. “It’s one thing to rip out all the drywall,” Ellis said. “It’s another thing to come back and fix it.”

“We’ve reached the rebuilding stage. Now it’s about getting the supplies and the volunteers and the resources necessary to do so. That’s going to take a long, long time,” Green added.

Learn more about the disaster response efforts of the Cooperative Baptist Fellowship.