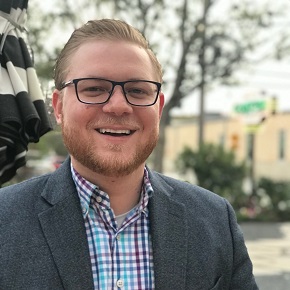 DECATUR, Ga. — To build upon the progress made over the past five years in starting new churches, the Cooperative Baptist Fellowship has selected Texas pastor Kyle Tubbs to join the Decatur staff in a new full-time position devoted to expanding the New Church Starts Initiative.

Tubbs, a CBF church starter and lead pastor of Peace of Christ Church in Round Rock, Texas, succeeds Andy Hale, who oversaw the initiative from 2014-2018 and recently accepted the call to serve as senior pastor of University Baptist Church in Baton Rouge, La. Tubbs has been closely involved in the New Church Starts Initiative following his commissioning at the 2014 CBF General Assembly as a church starter, coach, network contributor and mentor.

Harry Rowland, CBF associate coordinator of congregations and leadership, praised Tubbs and shared his hopes for the future of church starting in the Fellowship.

“When a quality person, God’s calling and the right position all come together, one knows something amazing is going to happen. This is exactly what has occurred with this commitment to a full-time, expanded initiative and Kyle’s selection for this role. The future for church starting in our Fellowship is bright. Kyle will be a blessing not only to CBF church starters but to our entire CBF family.”

At the 25th Anniversary General Assembly in 2016, CBF commissioned its largest and most diverse group of church starters, representing five of the Fellowship’s state and regional organizations, with varying church sizes and styles as well as starters’ contexts, approaches, ethnicities and gender — all dedicated to relational and incarnational ministry.

Rowland said that, under Tubbs direction, the initiative will keep moving forward, expanding throughout the United States in close collaboration with CBF’s Latino and African-American networks, CBF state and regional organizations as well as theological schools and other partners. A Spanish-language discernment and nurturing cohort is being formed to facilitate the growing number of Latino church starters desiring to partner with CBF. In addition to recruiting new church starters, Tubbs will develop and implement a robust strategy for expansion and further diversification of the initiative as well as provide continuing education offerings, coaching, mentoring, peer learning and fellowship for the church starts network.

Tubbs founded and helped launch Peace of Christ Church in 2012, building a core group, increasing church membership and hiring additional staff. He is a graduate of Logsdon Seminary of Hardin-Simmons University in Abilene, Texas, where he earned the Master of Divinity with a focus in spiritual care. Tubbs is also a graduate of the University of Mary Hardin-Baylor in Belton, Texas. He is currently completing a Ph.D. in Leadership Studies from Dallas Baptist University.

Tubbs has been an active participant in CBF life. He currently serves as Moderator-Elect of the Cooperative Baptist Fellowship of Texas and served as a CBF Fellow from 2014-2016. Tubbs was also part of the inaugural Fellows class of the Baptist Joint Committee for Religious Liberty. Tubbs is a member of the board of trustees of the T.B. Maston Foundation and the Center for Congregational Ethics.

Tubbs expressed his excitement to join the CBF staff and lead the New Church Starts Initiative.

“I am excited to join with wonderful CBF leaders to serve the New Church Starts Initiative,” Tubbs said. “CBF has played a formative role in my personal faith through local churches, my seminary education, and my development as a pastoral leader. I look forward to working alongside the CBF team to advance both the mission and identity of the Fellowship.”