BROWNSVILLE, Texas—Cooperative Baptists gathered near the U.S.-Mexico border and declared “not on our watch” to political forces that use children’s freedom as a deterrent to parents who seek safety for their daughters and sons in the United States.

They prayed, read Scripture and sang in Brownsville, Texas, standing beside the largest immigrant detention center in the country, which houses more than 1,000 children and teenagers. News crews also descended on the location, where only hours earlier, a 15-year-old boy escaped.

Fellowship Southwest organized the vigil in partnership with eight other groups concerned for immigrants. They sought justice for more than 2,300 children separated from their parents by the Trump Administration’s “zero tolerance” immigration policy.

“I wish none of us had to be here today,” lamented Mary Alice Birdwhistell, pastor of Calvary Baptist Church in Waco, Texas. She called on Christians to imitate the faith and courage of ancient Hebrew midwives who stood up to the pharaoh of Egypt, who sought to destroy all the Hebrew baby boys.

“Their allegiance was to God and not to pharaoh,” and they insisted, “‘No, not by my watch,’” Birdwhistell said. And now, “we must cry out, ‘No, not on our watch.’

“Fear calls us to build walls … but love calls us to stand up to power in bold and biblical ways and say, ‘No, not by my watch.’” 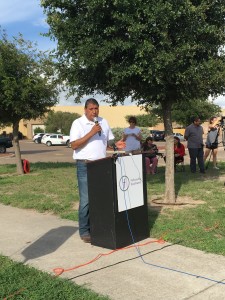 The church must be “a voice for the voiceless,” stressed Jorge Zapata, associate coordinator of the Cooperative Baptist Fellowship of Texas. “When I was growing up, the U.S. became a place of refuge for my family,” he said, explaining his mother was a U.S. citizen, but his father was a bracero, a Mexican who worked seasonally north of the border.

“I was born in Mexico. I was undocumented,” Zapata said. “But I want to thank the Lord, because I was given a chance.”

In Mexico, Zapata’s family was so poor they didn’t have enough to eat, he said. His father wanted the family to move to the United States to lift them out of extreme poverty, and his mother wanted them to immigrate so her children could get an education.

Now, Zapata is a college-educated U.S. citizen and ministers to people who live in the colonias along the Texas-Mexico border. Parents bring their children across that border “because they have no future” as they endure poverty and cower from gang violence in Mexico and Latin America, he said.

“Let the church be the house of refuge” for immigrant families, Zapata said. “They need us.”

“We’re here today because we’re the type of Christians that believe this conversation (about immigration) begins with the Bible,” said Javier Perez, director of missions & poverty alleviation for Buckner International in McAllen, Texas. Government policy is the end, and the Bible is the beginning of immigration discussions, said Perez, originally from Colombia.

“We understand what Jesus meant when he said, ‘Let the children come to me, for such is the kingdom of heaven,’” he said. “Hospitality is and should be a core value of that kingdom. We’re here to show hospitality. Let this be a foundation for a bigger movement” of hospitality for immigrant children.

“We are awash in global migration,” observed Suzii Paynter, a native Texan and executive coordinator of the Cooperative Baptist Fellowship.

“The image of God in each child brings us to a point of remorse for the separation of these children—children of promise,” she said. Christians must hold a paradoxical tension—“be the people of God in a world of laws,” she added. “We can do both.”

John Garland, pastor of San Antonio Mennonite Church in San Antonio, Texas, echoed the “children of promise” theme, citing the Prophet Isaiah: “Fear not. I have redeemed you … and called you by your name.”

“We call people ‘foreigners,’ … ‘illegals,’ … ‘dangerous.’ But God calls us by our real name,” Garland said. “I would like to join with Jesus in calling these children by their true name. Their true name is ‘Precious in God’s Sight.’”

“America has a dark history of separating children from families,” noted Mitch Randall, executive director of EthicsDaily.com. Two generations ago in northern Oklahoma, the government separated his Grandmother Eloise and Great Aunt Ruby from their family as children.

“It does my heart good to see people who say, ‘That is not who we are as a country,’” he said. He called on Christians to “encounter people with open arms, welcoming the stranger, saying: ‘Your journey ends here. … Let the children come.’” 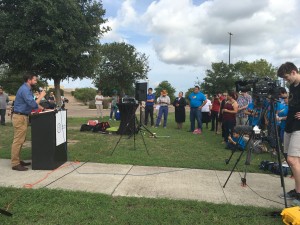 “Many people say they want to make America great again. We have assembled here today because we want to make America good again,” said Marv Knox, coordinator of Fellowship Southwest. “This is a vital undertaking, because America is on the verge of losing her goodness. And, naturally, the two are inextricably related.

“A careful observer once said: ‘America is great because she is good. If America ceases to be good, America will cease to be great.’ We have come here because we fear America has lost her moral moorings and is up to no good. We want America to be good again, because we love our national ideals, which include care for our neighbors in Mexico, throughout Latin America and around the world.”

“That is what we are doing here today—defending those who cannot defend themselves,” she reported.

“It is sad we have to gather on a day like this, in a situation like this,” said Jon Singletary, dean of the Diana Garland School of Social Work at Baylor University in Waco, Texas. In seeking safety and security for their children, “families have to make hard decisions, life-and-death decisions,” he noted. “I cannot imagine my children being used as a deterrent to decisions I might make.”

Diann Berry, a Cooperative Baptist Fellowship field personnel in Donna, Texas, cited “Litany for the Border,” a prayer written by Fran Pratt, a minister at Peace of Christ Church in Round Rock, Texas.

“We pray for an end to corrupt government, violence … and poverty in Central America,” she said. “We pray for humane and just legislation passed by Congress immediately. … We pray that we bring the compassion of Christ.” 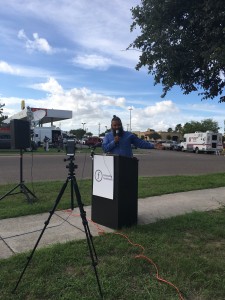 Julian Garcia, Pastor of The Well Church in Mercedes, Texas

Separating families “has no place in policy and practice,” insisted Bernadette Correia, lieutenant of the Salvation Army in McAllen, Texas. “Families in need should be met with love and compassion.”

Julian Garcia, pastor of The Well Church in Mercedes, Texas, imagined what Mother’s Day is like when mothers are separated from their children. “We ultimately are responsible,” he prayed. “Let the mothers of these children know we are sorry.”

Fellowship Southwest launched from the Cooperative Baptist Fellowship’s effort to strengthen ecumenical collaboration and to produce positive change in Oklahoma, Texas, New Mexico, Arizona and Southern California. Fellowship Southwest provides avenues for people of faith to take action on issues affecting our communities. Our partnerships developed through our endeavors to expand the presence and vitality of our faith communities by generating vision, providing resources and offering valuable connections.

3 thoughts on “‘Not on our watch,’ Cooperative Baptists say of immigrant family separation”