Chaplains Sarah Greenfield and Alan Rogers share a rare bond that encompasses God and country as it transcends family and vocation.

Commander Rogers and Lieutenant Junior Grade Greenfield are father and daughter, both commissioned as officers by the U.S. Navy and endorsed as chaplains by the Cooperative Baptist Fellowship.

Alan is the deputy force chaplain of the Navy Expeditionary Command Pacific, based in San Diego. Sarah is a chaplain at Joint Base Pearl Harbor Hickam in Honolulu.

Their chaplaincy careers overlapped when Sarah received her commission last April. But they set the trajectory toward that overlap years ago. 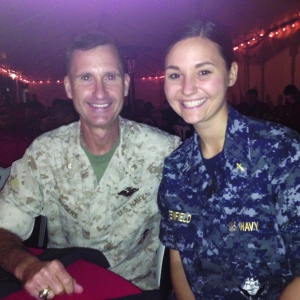 Alan Rogers and Sarah Greenfield share a moment at the Marine Corps Trials in Camp Pendleton, Calif., where the dad-daughter chaplain duo had the unique opportunity to minister alongside each other.

Alan followed a career as a military officer by heeding God’s call to become a chaplain.  He returned to Hardin-Simmons University in Abilene, Texas, where he concurrently earned a Master of Divinity degree from Logsdon Seminary and gained ministry experience required for military chaplaincy.

As Sarah observed that process, she began to sense God’s calling on her life, too.

“When my dad was in seminary, he would come home and talk about what they were talking about in seminary classes,” she said, noting those conversations created a spark deep inside her.

“I felt a calling to theology and ministry that early—in middle school,” she recalled. “I sought God, and as I found myself, I found a minister.”

Sarah received a real-world education as the daughter of a chaplain and member of a military family. “My first assignment as a chaplain was with a Marine Corps unit,” Alan reported. “A lot of the formative years for Sarah were spent on Marine Corps bases where casualty-assistance calls were unfortunately common for a while. That touched her, and I think God used that to refine her call.”

Eventually, Sarah returned to Abilene and Hardin-Simmons/Logsdon, where she earned both undergraduate and Master of Divinity degrees. She also returned to First Baptist Church, where she served as a youth ministry intern as an undergraduate, associate pastor of students during seminary, and became the pastor to emerging adults following seminary graduation.

Sarah’s experience at First Baptist validated her call. And her ministry to young adults prepared her for service as a chaplain. She daily meets the spiritual needs of service personnel, many of whom are between the ages of 18 and 30—“a large portion of our demographic and target audience”—as well as their young families, her dad said.

“I loved working in the church, and now feel I am an extension of the church to this unique group of people,” Sarah noted. “I see myself being able to live out the ministerial purposes of the church—but in this real opportunity for a ministry of presence.”

Although separated by a generation and multiple military grades, Alan and Sarah see military chaplaincy’s “ministry of presence” alike.

“There is no more incarnational ministry than what we do now,” Alan said. “We become these Sailors and Marines. We go where they go and do what they do, with the exception of carrying weapons. When they deploy, we deploy. We go on foot patrols with them. It’s an opportunity to know these people. We see them—and they see us—at our best and worst.”

“We put on this uniform and joined the military. We’re completely imbedded. My husband, Blake, shares in the sacrifices of a military spouse as he supports my ministry and service,” she said. “We go where they go. The same is asked of us as is asked of everyone. They know we’re sacrificing the same way they’re sacrificing, because we walk alongside them. That’s really important. That’s what earns sacred trust.”

Sarah’s fulfilment of that trust is both singular and familiar.

The military provides an unusual context for ministry, she noted. “I minister to families whose mom or dad is gone for eight months. And I minister to Sailors who are here for two weeks, and then their ship goes out again. I feel at home in that I was a congregational minister in Abilene, but this context is unique.” 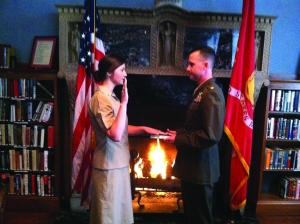 Alan Rogers commissions daughter Sarah Greenfield as an Ensign into the Chaplain Candidate Program in the library of the Marine Memorial Hotel in San Francisco, Calif., in December 2012. The Navy program is for prospective chaplains to explore chaplaincy and gain experience during seminary.

Some of that uniqueness is particular to the military: She participates in change-of-command ceremonies and prays at retirement ceremonies. She conducts funeral honors at the National Cemetery.

And some uniqueness has to do with radical diversity: “I look out on the diversity of people I preach to every week, and it’s a beautiful representation of our nation and Navy,” she said. On weekdays, that diversity is evident in her office, as military personnel and their families reach out to her for counseling.

“We have people who come here as a safe haven,” she described. “People of all faiths; people of no faith. I’m here for everyone.”

Still, she’s also providing ministry as she did back in Texas, the kind of ministry her colleagues in CBF’s Fellows program do in congregations all over the country.

“It is a unique configuration,” Hutchinson said. “Better still is their passion to build beloved community among Sailors and Marines ashore in Navy chapels, at sea aboard ships and in deployed locations and to give witness to the transforming power of Christ’s love. We are grateful for their presence in the sea services.”

She’s discovered a common denominator among civilians and military alike. “I think we all find God in the everyday stuff of life,” she noted. After Easter, Sarah preached on post-Resurrection passages from the gospels and talked about the disciples discovering Jesus as they ate with him. “That’s where we find God the most—in the midst of the ordinary, doing life together,” she said. “Now, I’m committed to doing that in a real way, as a military family and as a military individual.”

Rogers and Greenfield pictured at the Marine Corps Trials in Camp Pendleton where Rogers was chaplain of the Wounded Warrior Battalion West.

“Military family” is a generational context for Alan and Sarah. Older brother, Jacob, is a Marine. And while husband Blake and Sarah’s younger brother, Jackson, stake out their roles as the civilians of the family, Jackson is considering Navy medicine programs after his graduation from Hardin-Simmons.

As dad-daughter Navy chaplains, Alan and Sarah are “kind of an anomaly,” Alan conceded. And when it comes to evaluating talent and commitment, he’s a proud dad. “She’s an outstanding chaplain. I told our chief of chaplains, ‘Sarah is perhaps my single greatest contribution to the Navy Chaplain Corps.’”

This article was first published in the Summer 2018 issue of fellowship! magazine, the quarterly publication of the Cooperative Baptist Fellowship. This special issue is devoted to Fellowship Southwest, CBF’s new regional network launched to strengthen ecumenical collaboration and to produce positive change in Oklahoma, Texas, New Mexico, Arizona and Southern California. Visit www.fellowshipsouthwest.org to keep up with the work of Fellowship Southwest.