“So much for careful planning and a measured rollout,” Field Coordinator Marv Knox recalled. “But what better way to launch a new ministry than to participate in helping people who are enduring the hardest time of their lives?”

CBF congregations up and down the coast responded rapidly. Even as winds roared and waters rose, they maintained contact with church members and neighbors. And as soon as floods receded, they organized muck-out teams to begin restoring homes. In fact, by the time church leaders assembled for a rapidly called “CBF Harvey Summit,” they already had pulled carpet, sheetrock and furniture from scores of homes.

High winds and the storm surge from Hurricane Harvey caused significant damage to the steeple and pews at Salt Lake Baptist Church in Rockport.

From the start, CBF reallocated resources to help meet needs in Harvey’s wake. CBF field personnel Butch and Nell Green, who serve internationals in Houston, began coordinating recovery work in their area. Thanks to an anonymous donor, Matt Sciba, a former CBF field personnel, rejoined CBF part-time to coordinate effort along the Coastal Bend north of Corpus Christi. CBF Texas Associate Coordinator Jorge Zapata worked with Jesse Rincones, executive director of the Hispanic Baptist Convention of Texas, to assess needs among Spanish-speaking churches. Anyra Cano, a bilingual minister with extensive CBF connections, helped coordinate recovery teams, which had arrived from throughout the region and across the country.

“Of course, the heroes are the pastors,” Knox said. “From Corpus Christi to Beaumont, they worked untold hours, looking after their congregations and communities. Many of them mucked out homes during the day and provided pastoral care at night. They offered spiritual, emotional and practical counsel. Many opened their churches, and some opened their homes to ‘Harvey refugees.’ Even now, you can see fatigue in their eyes. But they have persisted.”

CBF field personnel Butch Green poses with two children in Rosharon, a Cambodian refugee farming community 30 miles south of Houston. The tents pictured were purchased with CBF field funds to help get families out of their mold-ridden homes after the storm.

Although Harvey was one hurricane, it acted like two storms. Along the Coastal Bend in the south, strong winds decimated buildings. Around Houston and Beaumont in the north, 500-year rains flooded entire communities.

Thanks to the anonymous gift that funded Sciba’s recovery coordination, CBF underwrote structural evaluations conducted by the Baptist General Convention of Texas church architecture department. Because of code and insurance requirements, CBF is focusing on providing donor-funded grants to churches that need help paying for repairs. Sciba has distributed questionnaires that will provide the basis for allocating reconstruction grants to congregations whose buildings were damaged.

Around Houston, Butch Green has coordinated construction teams, primarily working on homes, as well as greenhouses in a community of Cambodian refugee farmers. Volunteers have come to the area steadily since early last fall, and groups are lined up through the summer, he said.

Along the way, Nell Green has helped lead Houston-area response to Harvey-related human trafficking. Labor trafficking increases after major storms, she said, noting two risks—to local poor residents desperate for work, as well as to people trafficked from other places and brought in as free-to-cheap labor. 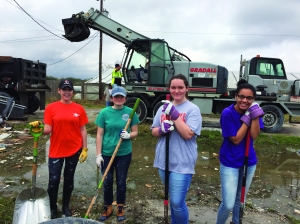 Working with the mayor’s office and other anti-trafficking groups, she provided training and awareness, both to help release trafficking victims and to help others be aware of trafficking symptoms.

The end of August—the first anniversary of the hurricane—will be a good time to re-evaluate Harvey recovery efforts, Butch Green said. “Of course, you never know what’s going to happen in the summer,” he added. “Every year, it’s something new. But we’ve worked with a lot of volunteers, and we’ve seen a lot of people helped. The Lord has used everyone through CBF to expand his witness.”