We spent days—weeks, actually—watching Florence slowly transform from a tropical wave off the coast of West Africa to a Category Four hurricane out in in the Atlantic before grinding its way into southeastern North Carolina as a Category One storm. From there, the tropical system meandered at an agonizingly slow rate across the Carolinas into Virginia, dumping record amounts of rain the whole way.

In anticipation of providing a response, it was a long, drawn-out waiting game.

As heavy flooding led to the closure of numerous highways, an entire week after Florence’s landfall passed before we would learn of the plight of Trenton, N.C., a town of 300, where over 90 percent of the homes and buildings were damaged by flooding. A day after hearing about Trenton, Alan Williams, who serves as CBF’s Disaster Response specialist, located the phone number of the town’s mayor and I gave her a call.

Mayor Darlene informed us that that no outside agencies had been in contact. I explained that CBF Disaster Response is not one of the big early response agencies.  Instead, we’re deliberate about assisting with long-term recovery in select, overlooked communities. Darlene asked us to come.

After seeing the damage and meeting the mayor and other local officials, Darlene asked how we found Trenton. I replied, “By way of Burma.” Of course, there was a little explaining to do.

From 1994 through 2009, my wife, Ellen, and I were CBF field personnel in northern Thailand. We established an agriculture and community development project that partnered with migrants from nearby Burma (Myanmar). We were part of the Thailand Baptist Missionary Fellowship, comprised of mission workers from across the globe, including CBF, the American Baptists, the Japan Baptist Union, the Baptist Mission Society and other sending agencies. Most of us worked with regional ethnic minority groups.

Between 2009 and 2013, we continued to live in the region, engaging in work that extended across Thailand and Burma as well as neighboring countries.

We were in regular contact with minority groups in that region, primarily the Palaung, Lahu, Karen and Kachin. Our partnerships included the Myanmar Baptist Convention, comprised of various ethnic Baptist associations.

On a few occasions, I visited refugee camps along the Thai-Burma border, each filled with displaced ethnic minority people from across Burma, particularly the Karen. After two decades of living in these camps, around 2007 many refugees migrated to the U.S.  They were resettled in dozens of American cities including Louisville, Jacksonville, Raleigh, Kansas City and New Bern, N.C.

After we returned to the U.S., we followed the activities of our old TBMF friends and colleagues, Marcia and Duane Binkley—dually appointed by American Baptist International Ministries and CBF Global Missions—as they ministered to refugees from Burma in far-flung places. Fluent in Karen, the Binkleys assisted these migrants, many of whom are Baptist. They offered help in accessing necessary services and connected the migrants with Baptist churches in their new cities. Many of the migrants eventually organized their own congregations, with the Binkleys following up with those in New Bern.

On September 15 of this year, with news reports about the impact of Florence in the New Bern area, I was concerned about the refugee community and reached out to Duane and Marcia, now retired from CBF and IM and living in the foothills of North Carolina. Also following the situation, they shared contact information for ministers from various New Bern refugee congregations as well as that of Richard Seagle, pastor of First Baptist Church of New Bern. Another name that the Binkleys shared was that of Daynette Snead, which is not a very Burmese sounding name.

I called Daynette, who had been waiting out the storm in Charlotte.  I learned that she was a native of Richmond, Va., and had been a member of FBC New Bern for years, eventually being ordained as a minister there. Currently, Daynette is working on her Doctor of Ministry degree at Gardner-Webb and serves as the associate pastor of the First Chin Baptist Church of New Bern, one of the refugee congregations.

I asked Daynette how the Chin and other New Bern refugees, several hundred in total, might have fared during the storm. She said that she would be checking with the six local ethnic congregations upon her return. 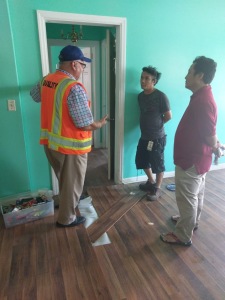 I traveled to New Bern on Friday, September 21, a week after the storm hit. By then, Daynette had determined that most of New Bern’s refugees were okay. She then suggested that we broaden our assessment of flood-affected areas to communities outside of New Bern and specifically mentioned the small town of Trenton.

At almost that exact moment, Alan Williams, who was en route from Wilmington, called to say that he was making his way through a very flooded town called Trenton.

Alan, Daynette and I spent the rest of the day following up with members of a local ethnic Karen Baptist congregation, evaluating flood damage to their church office and helping them make an insurance claim. That night, Alan and I camped out on the floor of the Chin church. Not able to sleep very well, Alan took time to look up contact info for officials in Trenton and gave me the number of Darlene the mayor.

Now we’re back to where we started.

After assessing overall damage in Trenton, getting acquainted with the mayor and other residents and making initial recovery plans, we mentioned that Daynette might be helping us coordinate future recovery efforts. Darlene the mayor exclaimed, “Daynette Snead? I know her! And she has an excellent singing voice.”

So that’s how the CBF disaster response effort in Trenton began. Headed to New Bern, we had no idea where we’d be led.  All we had were our relationships—some local and some that began on the other side of the world.

That seems to be the way that God works.