Headed west on I-10, in the vicinity of Tallahassee, downed limbs and quite a few leaning trees are noticeable. But beyond the state capitol, evidence of wind damage from Hurricane Michael seems to increase every few miles. 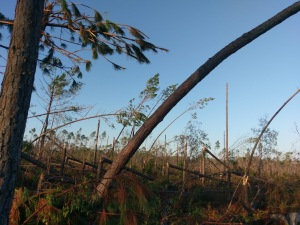 Exiting the interstate and headed into the town of Greensboro, there is no doubt that a significant weather event recently took place with fallen trees and blue-tarped roofs in abundance. The damage intensifies the further west you go toward Panama City, including the towns of Blountstown and Wewahitchka. Entire mature pine plantations—hundreds and even thousands of acres—are flattened; trunks snapped in half.

Three weeks after Michael made landfall just short of being a Category 5 storm, the Red Cross, Samaritan’s Purse and other large response agencies set up operations along the route. Law enforcement vehicles are frequently encountered along with caravans of electrical utility trucks headed to recovery sites.

Kenny, a resident of Ft. Walton, owns a home improvement business and is the founder and director of Give Me Shelter, a nonprofit devoted to improving the housing of vulnerable people in Central America and the Caribbean. Married to a teacher, the father of three daughters serves as the Associate Pastor of Seeker Fellowship Church, a CBF congregation. He’s also a surfer who’s caught a wave or two in Hawaii, Mexico and places beyond.

Now Kenny’s leading me around the Panhandle. Since the hurricane ravaged northwest Florida, chainsaw in hand, he has traveled to some of its most remote communities. He describes finding members of one household who spent days cutting their way through downed trees from their damaged home just to get to the main road.

A few days after the storm, Kenny, Ray Johnson and Rachel Gunter Shapard with CBF of Florida and Alan Williams (CBF Disaster Response Specialist), approached St. James about serving as a host site for CBF volunteer teams. Although the congregation was welcoming, St. James first needed to serve its community as a Red Cross emergency shelter. The day of our visit, a six-stall Red Cross shower trailer remained in the church parking lot with dozens of peopl—Red Cross staff and evacuees—milling in and out of the fellowship hall.

Unlike large agencies, such as the Red Cross, CBF does not engage in much early disaster response. Instead, we focus on the next phase; mostly long-term cleanup and recovery activities. Our teams of volunteers typically remove debris, muck out flooded homes and tear out water-damaged floor and wall materials. We also coordinate the involvement of teams to replace floors, walls and cabinets as well as roof repairs.

Kenny and I are at St. James to finalize plans for CBF volunteers to be hosted there. We check out the kitchen facilities where simple meals can be prepared by teams. The church has offered to let volunteers sleep on the pews. Also, the Bayshore Baptist Church (Tampa) shower trailer is in place.

However, we need to figure out where the trailer’s gray water will go as the church does not have an accessible sewage system or other appropriate drainage features. Should we purchase a special portable 500-gallon gray water bladder? Or can we rent a storage tank? And who will dispose of the water and for how much? There is so much to troubleshoot before volunteers can engage.

Next, we head due north to Marianna in Jackson County to secure a second strategic Panhandle site. The landscape of devastation seems even worse. Primarily woodlands and farms, what had recently been green and leafy is now a jumble of trees, broken and stripped bare. Most of the homes and buildings we drive past are damaged; some ripped apart. A giant cotton bale sitting in a field next to the road had been blasted by the winds, creating the effect of a small winter storm. 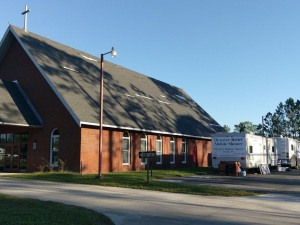 We see crude hand-lettered plywood signs along the way. Some express thanks to God.  Others ask for assistance. Kenny tells me about his favorite, one erected in front of a wrecked property that proclaims, “Yard of the Month.”

Even though Marianna is 75 miles inland, the hurricane barely weakened when it passed through.  Entering the town, we drive past numerous damaged buildings. One section of downtown looks like it has been bombed.

There we drop by two churches recommended by Rachel. Unfortunately, both have space limitations and other concerns, all of which would make it difficult to install a shower trailer to be delivered within days by CBF Arkansas. We decide to inspect another location a couple of miles outside of town.

Chipola Family Ministries (CFM) is busy. A military vehicle is parked near tents in which the Red Cross and other agencies are distributing food, water and other items. By the road, someone in a chicken suit holds a sign advertising free hot meals. A young man in the parking lot asks if we are there to help, informing us of a large tree lying across his home.

Rachel told us to talk to the CFM Director, Coba Beasley. Inquiring at the office, we’re told that we might find him rushing around in a pink golf cart. Stepping outside, we feel fortunate to immediately spot the golf cart in momentary pause. 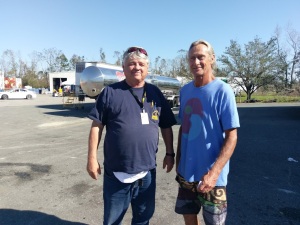 Coba, a big man with kind eyes, looks exhausted. In addition to his CFM duties, he also serves as the director of the local Baptist Association. He and Kenny quickly determine that they have mutual friends.

We take a few minutes to share about CBF’s plans to engage in long-term clean up and recovery in underserved local communities and ask whether CFM might have the facilities and energy to host more volunteers. Coba responds that many agencies will be leaving soon after the impact of Hurricane Michael is no longer in the news cycle. He adds that that anyone intending to engage long-term in Jackson County and nearby areas, such as Blountstown, is welcome at CFM.

With two sites hopefully secured for long-term CBF hurricane response in the Panhandle, we begin to feel a sense of relief. Of course, more phone calls will be needed to work out the gray water issues, determine if any hosting fees will be necessary and confirm exactly when CBF volunteers can arrive.

But today we’ve taken a major step towards getting CBF volunteers fully engaged in disaster recovery in Florida’s Panhandle.

If you or a group from your church would like to volunteer in the Florida Panhandle, we need your help! Learn more, find opportunities to serve, and apply to volunteer with CBF Disaster Response at www.cbf.net/dr-volunteer.