Even as a teenager, Natalia Gura knew she didn’t want “an ordinary life”—just working a normal job with no purpose beyond a paycheck. “Boring,” she thought. But she also didn’t believe her teenage dream was attainable—to own and operate a foster home for unwanted children in her native Macedonia. Today, she runs Emmanuel House, a private group home that cares for up to eight Macedonian foster children in Radoviš, a small town 80 miles east of the capital of Skopje.

What she has done to achieve that dream is neither ordinary nor boring. For the past six years, the 28-year-old has spent half her time earning a paycheck as an in-home caregiver in England. Then she would return to Macedonia and spend the next few months—and that paycheck—on the next step of construction of Emmanuel House. The favorable exchange rate between England and Macedonia multiplied her earnings, making the bi-national arrangement more than worth it.

“Each month I could calculate, for example, I would need 5,000 euros for the windows,” she explained. “So I would calculate how many days I have to work to get that money. I would go to England, work, come back, put the windows in.”

Gura filled Emmanuel House with colorful murals and imagery to make it bright and inviting.

Alicia Lee and her husband, Jeff, who serve in Skopje as Cooperative Baptist Fellowship field personnel, were impressed with Natalia Gura’s dream “to bring children into her home, to raise them up, to give them a place of security, to provide for their physical needs, emotional needs, mental needs,” recalled Jeff. When they met Gura in 2015, the Lees were impressed enough that they jumped in to help, providing some of the money and labor needed for the project.

In September, Emmanuel House opened its doors—making real the dream Gura once thought was out of reach. “I wasn’t sure it was really possible for me to do it,” she said. “I had no money for a place like this, but the desire was inside of me.”

Natalia has nurtured her dream since even before she devoted her life to Christ, she said. “I know it was the Lord working in my heart, opening the desire to serve him one day.

“I always thought that living an ordinary life—just going to normal work—is a bit boring if you’re not doing it for the Lord, and sharing how Christ has changed you and what He has blessed you with.

“This is going to be my life,” she said of Emmanuel House. “I want this to be not my work, but my life! Since I am a believer, I truly believe that this life here is only temporary, and we should live it for the Lord,” she summarized. “And if the Lord is calling us into ministry, we should give our all.” 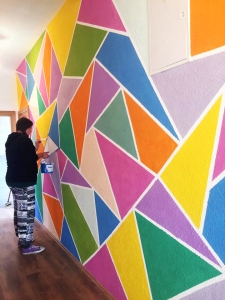 Natalia put her heart and soul into Emmanuel House, doing much of the work herself, like painting these colorful walls.

Although born in Macedonia, Gura is half-Polish and moved to Poland to go to university. “When I went to live in Poland, I realized I’m completely Macedonian,” she said.

There are very few foster homes in Macedonia. Most of them are large, understaffed, government-run institutions where children are warehoused and workers are indifferent, Gura said.

“There are a lot of children with few people taking care of them,” she said. “For those workers it’s just work—they just come, they have an eight-hour shift, then they go home. And they seem to forget what they are leaving behind. They go back to their normal lives.”

Gura’s vision for Emmanuel House is quite the opposite. “The one I want is a small one—eight children only, plus space for emergency kids—so I can work with each child at different times, and each one can actually connect with me. I want to know them better. I want to understand them. I want to be able to comfort them, to get to know their needs, and, if I’m able, to fulfill those needs. I want to build life-long connections and relationships with them—even if they leave here after three or four months,” said Gura, who also is studying for a nursing degree so she can take even better care of the children.

Though her vision has been clear from the start, Gura said, the path at times has been lonely—no organization or congregation behind her, little encouragement or guidance from the government, and not much support from her family. 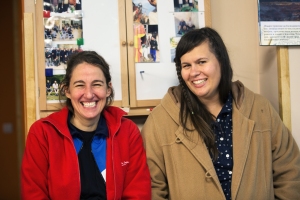 Natalia Gura (right) alongside Mariella, who serves with RETO, the ministry which built the beds for Emmanuel House.

But help did arrive—delivered through a combination of modern technology—Facebook and Skype—and old-fashioned Bible study.

Overwhelmed by the obstacles of cost and government red tape, Natalia hit her lowest point in 2015. In a Skype conversation with her brother, who lives in Poland and was on his way to a home Bible study, she asked: “Can you please pray about the children’s home that I’m building?”

Leading that Bible study in Poland were two Americans, including Jeff Lee’s former youth minister. “He said to my brother, ‘Hey, we have two friends in Macedonia. Maybe we can connect them with your sister, and they can see how they can help her,’” Gura recalled. 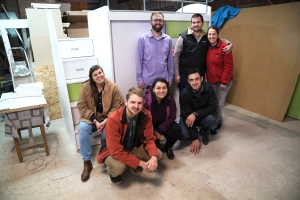 “So next thing I knew, I had a Facebook message from Alicia,” Gura said.

“She is a young, vibrant, bright person who has a love for the Lord,” Alicia Lee said. “And that love compels her to do something for others. For her, she knows she is called to serve children.”

The Lees raised some of the money needed to construct the 15-plus-room house and recruited teams of volunteers from CBF churches to do some of the work. They were impressed with Gura’s globetrotting strategy to earn money. “She would tell us, ‘This time I am going to earn all the money I need for the doors,’” said Alicia.

There was a lot to do. The two-story house was to have five children’s bedrooms, two staff bedrooms, four bathrooms, an office, kitchen, living room, activity room and a large backyard.

Gura’s fundraising plan was working, but very slowly. “When we first met Natalia, her timeline for opening Emmanuel House was four or five years,” Alicia said, “but through partnerships with CBF churches she was able to open it two to three years faster than she ever thought possible.”

Natalia stands with the newly-completed beds for Emmanuel House, made by ministry partners at RETO.

Bringing together U.S. volunteers and Macedonian Christians is one of the favorite parts of Jeff’s ministry. “It’s a wonderful experience,” he said. “It’s a wonderful time of connecting people. Natalia is so grateful, and we are so grateful that she allowed us to be a part of the work that she’s doing.”

Although her family wasn’t very supportive of her foster home dream, Gura’s mother did give her the land on which she built Emmanuel House. “I was actually looking for a house already done to buy; but it is quite expensive,” she recalled. The government doesn’t pay any of the construction costs, but pays only a stipend to cover part of the food and housing for the children.

“Beyond that,” Alicia explained, “Natalia will be responsible for any type of programming that happens in the home.”

“We’ll have to find donations and people who would like to help with these kinds of activities,” Gura added. She hopes U.S. churches and individuals who hear of Emmanuel House will sponsor a child or offer other support. It’s fairly common for outsiders to come to Macedonia and establish Christian ministries, Gura said. But places like Emmanuel House—started and run by Macedonians—are rare, she said.

Alicia is confident Gura’s true motives will be evident to her community, and especially to her foster children. “She will be for them the presence of Christ in that home,” Alicia said. “She desires to show them love, to have a safe place where they can have their needs met, but even more to know Christ’s love for them.” 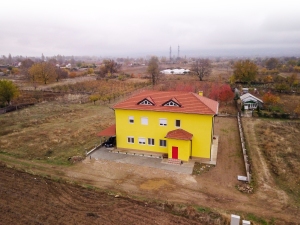 Emmanuel House is a private group home that cares for up to eight Macedonian foster children and was the dream of Natalia Gura.

As Emmanuel House prepared to open in September, another group of CBF volunteers came to put on the finishing touches. At the end of the month, Emmanuel House welcomed its first resident—a three-year-old boy.

A teenager’s dream is a reality!

Now, as the 28-year-old looks to the future, Gura’s faith and confidence continue to grow. “Even if, at some point, the government decides not to do these kinds of projects anymore, I have the certainty that the Lord will keep this house alive,” she said. “Jesus loved children, widows and orphans—and He took great care of them while He was on this earth,” Gura said, “And that is what I want to do—follow in His footsteps and take care of children. And I do hope that some of the kids will learn to love the Lord,” she added.

And she hopes they too will dare to dream big. “Hopefully, when the children leave from here they will want to do something on their own that will please the Lord.”

This article appeared in the Winter 2018-19 issue of fellowship! magazine, the quarterly publication of the Cooperative Baptist Fellowship. Read online here and subscribe for free to fellowship! and CBF’s weekly e-newsletter fellowship! weekly at www.cbf.net/subscribe.