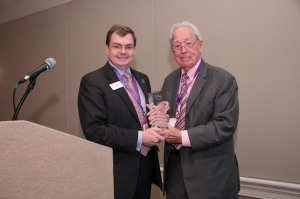 Rev. Dr. Jimmy R. Allen, a visionary Baptist leader who has been called a “prophetic priest,” passed away January 8 at his home in Saint Simons Island, Georgia, according to Baptist News Global. He was 91.

Allen, who helped birth both the Cooperative Baptist Fellowship and New Baptist Covenant, devoted his life to pursuing justice and championing freedom through his rich and impactful public ministry which spanned more than 60 years. A practitioner of “applied Christianity,” Allen was a bold advocate for the ‘least of these’ and was widely known for his work on behalf of racial equality and racial reconciliation.

“If you were blessed by his bigger-than-life service, you know that Jimmy revealed God’s unconditional love. He was a pastor who brought life-giving ministry that transformed downtown San Antonio and brought compassion to the street,” Paynter said.

“Jimmy was a visionary Baptist leader who believed in the power to convene good people for the surprising work of God. Depending on the true calling of committed Christians, Jimmy engaged in honest dialogue and true cooperative ministry—forgetting the small things and seeking the common good, he forged new rekindled dying embers and troubled spirits into bright flames. He brought a strong voice of encouragement and expectation to any endeavor. He expected excellence and worked hard to live by hymn ‘Hear ye the Masters call, give God your best.’ He did. And he encouraged so many of us to do the same,” Paynter said.

Regarded as one of the most influential Baptists of the twentieth century, Allen served in many high-profile denominational roles. In 1960, at the age of 32, he was selected to be the top ethics leader for Texas Baptists as director of the Christian Life Commission, and during that time emerged as a national leader on moral and ethical concerns—most notably racial equality.

After a seven-year tenure, Allen went on to serve as senior pastor of First Baptist Church, San Antonio, Texas (1968-1980) during this time was elected as president of the Baptist General Convention of Texas (1972-1973) and the Southern Baptist Convention (1978-1979). He also served as president and CEO of the Radio and Television Commission of the SBC (1980-1990).

Allen was an instrumental leader in the formation of the Cooperative Baptist Fellowship. As national president of Baptists Committed, a moderate group committed to resisting fundamentalism in the SBC, Allen organized and convened a gathering of 3,000 Baptists in August 1990 called the Consultation of Concerned Baptist. From this historic meeting, Allen helped to form a steering committee that would plan a follow-up meeting in May 1991 where the Cooperative Baptist Fellowship was formed.

As CBF took shape and emerged as a viable missions and ministry organization, Allen served as co-chair of the Global Missions Ministry Group alongside Jeanne Bond. Allen and Bond focused their energies on developing processes for engaging in mission initiatives. When the SBC defunded the Ruschlikon Theological Seminary in Switzerland, Allen and the mission group traveled to Europe and committed to the appointment of missionaries in Europe who had resigned in protest from the SBC Foreign Mission Board. Allen served as a vital member of the inaugural class of the CBF Coordinating Council from 1991-1993.

In June 2016, Allen was honored with the Carolyn Weatherford Crumpler Leadership Alumni as part of CBF’s 25th Anniversary Celebration as an expression of CBF’s appreciation for Allen’s impactful leadership in partnering to renew God’s world.

The Cooperative Baptist Fellowship is a Christian Network that helps people put their faith to practice through ministry eff­orts, global missions and a broad community of support. The Fellowship’s mission is to serve Christians and churches as they discover and fulfill their God-given mission. Learn more at www.cbf.net.