ST. LOUIS — Two CBF ministers were honored Tuesday for their outstanding leadership during the second day of ChurchWorks, the Cooperative Baptist Fellowship’s annual conference for Christian educators meeting Feb. 25-27 at the historic Third Baptist Church in St. Louis. Churchworks is a three-day event for all practitioners of education and spiritual formation in the congregational setting.

Frank Granger, minister of Christian Community at First Baptist Church, Athens, Ga., was honored with the 2019 Jack Naish Distinguished Educator Award. This award is named after the long-time minister of education at Wieuca Road Baptist Church in Atlanta and is awarded to one CBF minister for outstanding leadership in Christian education. 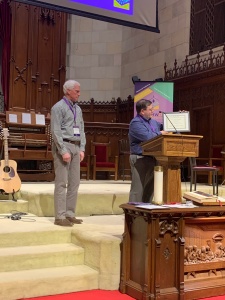 Granger, who has served at FBC Athens since 1989, received praise from Cooperative Baptist leaders for his many years of faithful service and commitment to the church. New CBF Executive Coordinator Paul Baxley, who served alongside Granger while senior minister of FBC Athens from 2010-2019, shared his congratulations.

“Your life of faithful ministry and exceptional service here at First Baptist Athens, and also across the Cooperative Baptist Fellowship family is worthy of celebration, respect and recognition,” Baxley said. “Your ministry has not been confined to our congregation. You have been a mentor and friend to your colleagues around the country and particularly to younger staff ministers in our community and beyond. Personally, it has been one of the great privileges of my life in ministry to have had this season of serving with you. Your friendship is treasured not only by me, but also by Jennifer and all four of our children, and many more at First Baptist Athens join me in deep gratitude for you, your faith, your service and your friendship.”

“Your commitment to Christ’s church and to our world is exemplary and worthy of emulation,” Long said. “You bring a deep well of grace and compassion at First Baptist Athens, and we are grateful to drink in it.”

Tyler Tankersley, pastor of First Baptist Church in Cape Girardeau, Mo. and member of the 2018-2010 cohort of CBF Fellows, was honored with the 2019 CBF Young Baptist Leadership Award. This award, also nominated by peers, is presented annually to a minister or congregational leader who represents a growing interaction with and support of the Fellowship and has demonstrated ministry to those of every generation. 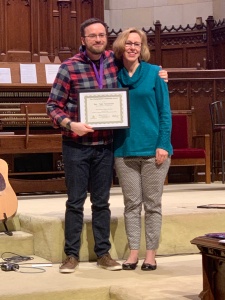 Jeff Langford, Coordinator of CBF Heartland, said Tankersley “cares deeply about the well-being of the church and the Fellowship.”

“Tyler is always willing to share his gifts of leadership, encouragement and influence with CBF and CBF Heartland. As a college student, he started a college retreat that has continued to flourish. As a youth minister, he encouraged young people to engage in CBF initiatives and missions. As a young pastor, he continues to promote and encourage connections between CBF and his church.”

Bruce Gentry, a member of FBC Cape Girardeau and Baptist Campus Minister at Southeast Missouri State University, praised Tankersley as “one of the great young gifted preachers in CBF.”

“Tyler’s ministry of connecting with people through relationship building, networking and leading is unfortunately too rare of a thing nowadays,” Gentry said. “We are fortunate to have Tyler in the CBF network. With people like Tyler leading, we have hope for the future.”

The 2019 ChurchWorks conference continues a three-year conversation on wellbeing by focusing on sharing the love of Christ by battling injustice, exclusion and marginalization in communities. Attendees are hearing from featured speakers on diverse topics related to community wellbeing such as building healthy communities, awakening to white privilege, resourcing congregations on clergy sexual abuse, environmental stewardship and embracing change and renewal:

Parker Ebling-Artz, a chaplain in Kansas City, Mo., led music during the three-day conference. Learn more about ChurchWorks at www.cbf.net/churchworks.