A rainbow formed over the Trenton, N.C., courthouse following the community’s Christmas parade.

As Hurricane Florence stalled over Eastern North Carolina in September 2018, the Trent River swelled to a record level-an entire foot higher than during Hurricane Floyd in 1999. Residents of the quaint town of Trenton had little warning of impending flooding until the U.S. Coast Guard began banging on doors in the middle of the night, imploring people to evacuate. For days, the majority of Trenton’s homes and businesses sat underwater, soaking up irrevocable damage.

More than a week later, the town’s residents, many of whom had lived in Trenton for more than 70 years, returned to their homes and the sopping wreckage inside to begin the slow work of rebuilding. That’s when the Cooperative Baptist Fellowship deployed Daynette Snead, associate pastor of First Chin Baptist Church in New Bern, N.C., to mobilize congregations across the country to help the people of Trenton rebuild their community. 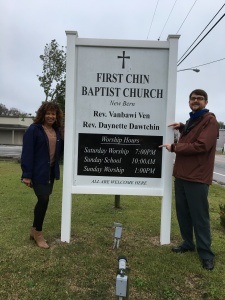 Snead, who continues to coordinate CBF’s disaster response in Trenton, said she and her team quickly converged on the Haiti neighborhood (pronounced HEY-tie) where the town’s most vulnerable resided.

“Many of the flooded homes in Trenton were located in lesser-resourced areas, close to the river at lower elevations;’ Snead explained.

“We identified one of those areas, Haiti, which has about 20 homes in a very small area. These properties had not experienced flooding since Hurricane Floyd in 1999. Flood insurance was an additional cost that most could not readily afford. However, we have been able to touch many, if not most of the homeowners in the Haiti area.”

First, Snead and her team had to locate Haiti’s families, many of whom had moved in with extended family in other parts of the state. Once they made contact, Snead met with residents and town officials to listen carefully to their needs and offer CBF assistance as part of the solution in recovery, she said. The vast majority needed help clearing out damaged furniture, drywall, insulation and debris from their homes.

That’s where more than 176 volunteers from congregations across North Carolina, Georgia, Alabama and Kentucky came in. Together, they logged nearly 2,000 hours over two months, clearing damaged property and prepping homes for repair.

One team from Zebulon Baptist Church even cleaned up and manicured Trenton’s community cemetery, complete with new flowers. Afterward, CBF hosted a Veteran’s Day BBQ lunch for the community to celebrate the newly-reconditioned plot. Disaster response isn’t only about clearing wreckage, Snead said. It’s about caring for people at their most vulnerable.

“We’re sharing conversations and letting the residents know we’re here to assist. I say to our volunteers, ‘You’ve heard the call and here you are. I know this is different,
but this is ministry too. Even though we’re raking debris and ripping out drywall, we also have opportunities to sit down with someone whose life was disrupted and build relationships with each other.”‘

As of Thanksgiving, Snead and CBF had almost completed demolition and cleanup. Going forward, Snead explained, CBF is evaluating first needs for home repair and organizing volunteer groups to install new drywall and insulation, supplies for which CBF and partner congregations are sharing the cost. Though most households in Haiti did not have flood insurance, CBF is also helping residents apply their disaster compensation from the Federal Emergency Management Agency (FEMA) toward repairing or replacing their HVAC systems, electrical systems or appliances. At that point, she said, homes will once again be livable.

No matter where Trenton’s families are in the process of rebuilding, Snead said, CBF will be there to listen and to partner, even long after first responders have left. “It was a blessing when CBF came in, because people truly felt lost,” she explained. “Many didn’t know where to go, or what to do. Other organizations came in and helped as well, but we were the first ones to arrive, welcoming others and partnering with anyone who joined.”

In November, one Haiti woman reflected with Snead, commending the volunteers who helped her clear debris and clean up her home. “You’re the only one who’s coming back,” she said. “Everyone else is gone now. So we just thank God for you.”

That says everything about CBF’s presence, Snead explained-not only with disaster response, but in every way that we partner in ministry.