On the western and tree-covered slopes of the Appalachian Mountains, rain has a way of bearing down on you with a soft inevitability. If the turning of the poplar leaves toward the skies does not tell you, then the first cool gust of the stormfront clearly promises thunder. The wind whistles faintly as it tugs at the leaves and pine needles of the trees that make up Brush Mountain’s blanket and all else seems to fall quiet before the mountains’ rumbling, insistent visitor. At the top of the mountain, in a recently refurbished settlement school, you might also hear singing as the thunder rolls over the mountain. 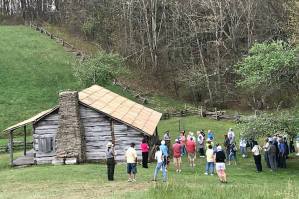 An Amish group was able to repair the historic pioneer settlement in Middlesboro in the same way and style in which it was constructed, and stayed in the facilities at FBC Middlesboro, making friends with the congregation.

Inside, taking shelter from the storm, are two-and-a-half dozen Baptists, a dozen Amish friends, and a collection of park rangers singing hymns acapella. How does such an assortment of people end up singing hymns as a thunderstorm makes its way through the Cumberland Gap? Well, just like the muddy access road up Brush Mountain, the story itself is a little “sigogglin”—that is to say, it takes its time getting to the point.

“Please come and see Appalachia; but we have two requests,” the Rev. Zachary Bay of First Baptist Church of Middlesboro, Kentucky, began in his invitation to seminarians and their professor from Columbia Theological Seminary to come serve in their midst, but also to “eat with the church on Wednesday night and tell us about your experience.” Of course, this trip wasn’t meant to be the kind of mission trip where outsiders give from their surplus to those who appear to lack enough, gaining only something like perspective for themselves. Rather, this was meant to be another step in the journey that the congregation was already taking toward a deeper intimacy with their own context and its many assets. 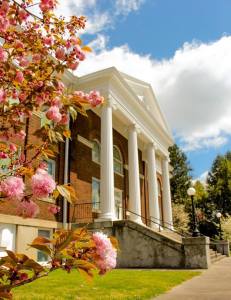 The congregation of FBC Middlesboro was coming to understand that something needed to change—not only in the way they thought about missions, but also in the way they thought about church itself. Declining in numbers and increasing in average age, FBC Middlesboro faced many of the anxieties with which so many other congregations are familiar. After the deaths of some of the “pillars” of the congregation, FBC Middlesboro could have despaired (and  perhaps some did).  Instead, they endeavored not only to be present in their community, but to genuinely know their neighbors. As FBC deacon, John Parker, puts it: “We needed to be careful that we really understood what was going on with our neighbors before we, as a church, could presume to address a need.”

With the congregation’s blessing, a group of congregational leaders gave themselves to asking the question: What could FBC Middlesboro do for the community regularly? Simultaneously, they abandoned the question: What could the congregation do to add numbers and resources to itself? “When you quit thinking about adding and filling up and instead think about emptying out and going out,” John Parker explained, “that’s a paradigm shift.” Part of that shift included going to see how others were engaging their communities. 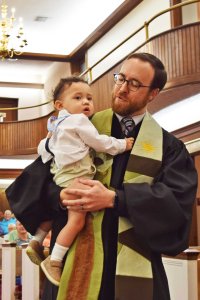 At the First Baptist Church in Wilmington, North Carolina, they remembered learning that real change—substantial change—takes a long time and is energized by passionate, engaged and burdened leaders whose passion motivates others to become more deeply involved in the shared work of the congregation. On a mission immersion trip with Metro Baptist Church in New York City, they had the chance not only to serve and learn what mission is like in the context of New York City, but also to experience the culture and life of the city and of Metro Baptist’s neighborhood. Of course, this was also the first time some of the members would really get to know the newcomers, Zach and Kristi Bay.

Something was changing and a dream for something beautiful was blossoming in the hearts of the people of FBC Middlesboro. Not only were New York City and Wilmington beautiful places, but so was Middlesboro. Reaching out to Lon Oliver at the Appalachian Ministries Educational Resource Center (AMERC) just up the road in Berea, they began to imagine what a mission immersion experience in Appalachia might look like.

With Lon’s help, leaders from the congregation loaded into a 25-passenger church bus and set out on a prototype of an Appalachian Immersion project. They visited the cities of Harlan, Lynch and Whitesburg, as well as the Portal 31 coal mine, a regional museum, the Lamphouse Coffee Shop, the Appalshop, Henderson Settlement School and Pine Mountain. The trip told a story about the economic, social and cultural history of the region in a way that could not be told otherwise. Zach remembered that “it was a way of feeding [the congregation] out of their own basket” and “giving them back their own story.” 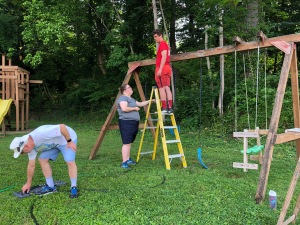 FBC Middlesboro reevaluated their perspective on mission, shifting their view to what they could do for their own community, rather than needing to travel to share the love of Christ in simple and tangible ways.

While there were more meetings after that trip, it was soon clear to the people of FBC Middlesboro that they had to try it–at least they had to try inviting others to come and see the place they loved and invite them to love it as well and to be inspired to go and see their own homes as the same kind of beautiful. With their new imagination, unused Sunday School rooms could be rooms in which welcomed visitors stayed and showers and sinks could find a place with the help of local plumbers.

After connecting with the seminarians and their professor at Columbia and confirming their trip, the people of FBC Middlesboro gathered in the church parking lot the night before they arrived to attend to one more vital task: building and installing all of the bunk beds.

That first trip—and those first visitors telling the story of their visit at FBC Middlesboro on Wednesday night—confirmed the idea of Appalachian Immersion in the minds of the congregation; but it was more than a catalyst for just one program. The Spirit was moving in the life of FBC Middlesboro and calling it onward into new adventures like this one. New leaders, new passions and new ministries were born out of the spirit of hospitality that was formed by the congregation’s shared risk. John Parker remarked, “We want to offer what we have—this building and our things—just like we learn to offer ourselves to Christ. There’s still a lot of uncertainty about it, but we’re still offering.”

There have been more visitors to the mountains around Middlesboro since the first set. Sometimes, they go and work at the Cooperative Christian Ministry where they pack boxes in the food pantry, organize, clean or perform various upkeep tasks around the ministry and the town. Sometimes they go dig ditches, repair fences and clear brush at the Mountain Hollow Farm in nearby Tazewell, Tennessee, where Beth farms and keeps goats after moving to and falling in love with the region. Sometimes, they work with one of the other partners of FBC Middlesboro. But always visitors talk with and learn from the people who live there.

Visitors hear stories that tell the good, the bad and the in-between of the mountains. In this honest space, they have a chance to love and be loved by real people in a real place and to find the Gospel hidden in those tiny, sometimes insignificant moments of human interaction. Zack insists, “We don’t want them to go home saying, ‘I’m so glad I don’t live there—they’re so poor.’ We want them to go home saying, ‘Wow, I had no idea that that place was so similar to my own.’”

It should come as no surprise then that when Carol, a park ranger at the Cumberland Gap National Historic Park, called Zach about a group of Amish would-be-visitors who wanted to come help repair Hensley’s Settlement that the people of FBC Middlesboro were eager in their practice of hospitality. Their Amish friends were able to repair the historic pioneer settlement in the same way and style in which it was constructed. Each day, they’d rise early from their bunk beds at FBC Middlesboro and make their way up Brush Mountain to work. FBC members worked together to provide food for their visitors, to give them rides around town, even to help them visit the Appalachian Immersion sites.

On Wednesday nights, the Amish folks and the Baptists sang hymns together even if they worshipped separately on Sunday morning in the same building. Over the month they were there, more was built up than Hensley’s Settlement; their Amish friends are planning to return, not to do more work, but to visit the people of FBC Middlesboro and the place they now love.

So, there they are, on Brush Mountain, huddled together tightly the day before the visitors will return home. They’ve marveled at the work accomplished in such a short time and the deep history of the place where they stand. Now, they take shelter from the rain and their voices rise to compete with the mountain thunder. They sing about awesome wonder and rolling thunder and they sing how “Love will never come to nothing…everything has an end but love.” But mostly, as thunder rumbles through the valley, their songs seem also to be about the movement of the Spirit in this beautiful, unexpected place.

“It’s the Holy Spirit having a ball here in Middlesboro and we get to bootleg off of it,” Zach jubilates. “What could be better than that?”

Joshua Hearne is a member of, and leader with, Grace & Main Fellowship: an intentional, Christian community devoted to hospitality, shared life and resources, and grassroots in community development in Danville, Va.