It was not CBF field personnel Dianne and Shane McNary’s intention to forge a long-term connection with the Slovak Baptist Union (SBU) when they facilitated pastoral leadership internships for two Slovak women in 2005. However, partly due to this commitment to women in leadership, the McNarys have joined SBU initiatives, including a new partnership to support marginalized Roma groups in Slovakia. 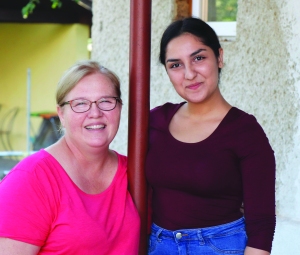 CBF field personnel Dianne McNary (left) and Engrid (right), a young Roma woman who is in business school in Bratislava, whom the McNarys support through a scholarship.

“I’m really excited about the first meeting, which the Slovak Baptist Union held last October to discuss work among different churches with the Roma,” Shane said.

Shane has developed a friendship with the recently-elected head of the SBU, Ben Uhrin. Their connection first materialized during the McNarys’ second year in Slovakia, when two young women graduated from a local Slovak Baptist seminary.

The McNarys helped send the two female Slovak students to Arkansas for an internship. “CBF Arkansas stepped in to help, and we sent these two women. I knew one of them, but the second one I didn’t really know,” Shane explained. It was not until several years later that Shane realized the second woman was the sister of Ben Uhrin, with whom he served on the board of the International Baptist Theological Study Centre.

“We spent a lot of time together on the board,” Shane said. “It was a friendship that developed over years, and then Ben was elected to be head of the SBU.” Uhrin, in his new position, wrote Shane and said, “Why don’t we chat about what we can do to look at Roma work in Slovakia?”

Out of conversations between the friends and with Shane’s planning, Uhrin led the first SBU meeting to concentrate on work with Roma organizations. “It’s a new, strategic effort of the SBU; it is innovative in that they have not done it before,” Shane said.

The McNarys work with various Roma partners in Slovakia. The Roma people group, who emigrated from India some 800 to 1,000 years ago, have faced discrimination in Europe. Most Roma work doubly hard to make ends meet, and they deal with racism and isolation. “There are gaps between those who have and have not. Academically and economically, the gaps continue to widen,” Shane said. “It would be a mistake to say the situation is improving for Roma.”

Although many Roma educators and organizations are working to change this, Shane maintains there is much work to be done. “You can point to successes,” he explained. “We support a young Roma woman who is in business school in Bratislava. She said she wouldn’t be able to go without these scholarships. This is a wonderful success; but I see more people who are being pushed aside.” 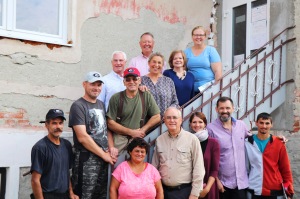 Representatives from First Baptist Church of Athens, Ga., with Dianne and Shane McNary in Vazec, Slovakia.

Discrimination against minority groups has been described as one of Europe’s largest social issues and far-right rhetoric exacerbates the problem.

“You cannot ignore that countrywide the situation seems more stressful,” Shane said. “I cannot talk about all Roma, but I can talk about Engrid, the student who is in university. I can look at positives in our relationships.”

This is why collaboration with majority Slovak communities is vital. The McNarys hope more Roma leaders will be present at SBU meetings—a challenge due to historic segregation from majority organizations. However, without the investment of local leaders and communities, initiatives cannot thrive.

Other partnerships continue to develop. Dianne works with library and English language initiatives that have extended to nearby towns. “We work through partners to connect with local schools to support their English language work,” Shane said.

“A local partner has established a preschool in which children are being prepared for entry into regular public schools when they start kindergarten.”

Older kids who are already in school can go to another partner, the Samuel Kid’s Club, where they will be warm and can do their homework. The children are often proud of their progress. “They were really excited to show they made all A’s,” Shane said. “That’s really cool to see them find success and be able to celebrate in an academic sphere.”

The McNarys also helped facilitate an internship for their former Student.Go intern, Kieryn Wurts, with the European Baptist Federation. This has been an extension of Shane’s work with the United Nations, where he represents CBF and the Baptist World Alliance.

“What she is involved with is really crucial to going forward,” Shane said. “For issues of freedom and justice, that’s what it takes—working together with good information, and with locals with deciding what the needs are.”

Wurts is the Freedom of Religion or Belief research assistant and works to introduce an international human rights framework as set out by the Universal Declaration of Human Rights and other agreements. “This research position is so important,” Shane said. “I’m glad it came out of CBF’s ability to give to the Global Church.”

Shane emphasizes that he and Dianne’s work with Roma groups and other international partners is made possible by Cooperative Baptists’ support of the CBF Offering for Global Missions.

“I want to express my thanks,” Shane said. “The Offering for Global Missions is what makes this possible. It is the relationship of churches locally and globally. It is through this Offering we are able to do this.”

This article appeared in the Spring 2019 issue of fellowship! magazine, the quarterly publication of the Cooperative Baptist Fellowship. Read online here and subscribe for free to fellowship! and CBF’s weekly e-newsletter fellowship! weekly at www.cbf.net/subscribe.