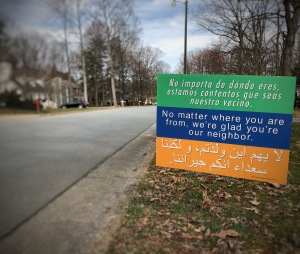 The number of total bias-based incidents has increased from 6,885 in 2015 to 8,437 in 2017—an 18% increase over 3 years. It’s no secret that during that time, various white supremacist groups began to (re)emerge from the shadows, emboldened by the vitriolic rhetoric that quickly became commonplace among many of our political and supposedly Christian leaders. And unfortunately, anti-Muslim violence has been on the rise not only in the U.S. but throughout much of the Western world.

In early 2017, the church where I currently serve, College Park Baptist in Greensboro, N.C. (which has worked with a number of refugee families of various faiths over the years), was well aware of this disturbing trend. As a showing of solidarity with our immigrant neighbors of all faiths, we offered “Welcome Your Neighbors” signs to our congregation. These signs, which read, “No matter where you are from, we’re glad you’re our neighbor,” in Spanish, English, and Arabic, were created in 2015 by Immanuel Mennonite Church in Harrisonburg, Va. They quickly sparked a movement among communities and individuals who wanted to openly show their love and support for all members of their communities.

My family has had one standing at the front of our yard offering its welcoming message ever since—through the implementation of Executive Order 13769 (the “Muslim Ban”); through the Quebec city mosque shooting; through a well-publicized meeting at a restaurant in nearby Kernersville, N.C., where one attendee openly suggested killing all Muslims; through the Portland, OR train attack; through a March Against Sharia in our state capital, Raleigh; and through the horrific mosque attacks that took place in Christchurch, New Zealand.

While there have been a number of terrorist attacks associated with the Islamic State over the past several years, it is important to remember that, just as there isn’t only one version Christianity, there also isn’t just a single variety of Islam. We Baptists, of all people, should be able to understand that.

To characterize those promoting hate, fear, and violence in the name of Islam as representative of all Muslims would be akin to believing that all Christians held to the views of Christian Identity groups. The truth is that Christians and Muslims have much more in common than some might think.  The Qur’an—the holy text of Islam, God’s word as revealed to the prophet Muhammad—depicts a merciful and loving God (85:14).  It also states that we are created from the earth and shall return to it (20:55) and that a Day of Resurrection will be signaled by the blowing of a trumpet (18:99). If these concepts sound familiar to Christian readers, they should—consider Ps. 86:5, Gen. 3:19, and 1 Cor. 15:52.

Many Christians also might be surprised to find that the Qur’an includes an entire sura (chapter) devoted to Mary.  Sura 19, “Maryam,” provides an account of Jesus’ birth that is arguably more detailed than any of the Christian Gospels’ birth narratives.  In the Qur’an, Jesus is said to have been conceived through the Spirit of God and made to be a sign and blessing to all people (66:12, 19:21), and Jesus and Mary (among other characters central to Christianity) have both been revered by Muslims throughout Islam’s history.  And beyond these scriptural similarities, it is common knowledge that at the atomic level, we’re all physically made of the same stardust.  Of course, our respective faiths have many important differences as well, but regardless of how alike or different we may be in certain ways, the reality is that we are now and will continue to be neighbors.

As a faithful, loving people, we must be unafraid to acknowledge white supremacist terrorism for what it is and recognize that it is fueled by nothing more than fear, hatred, and violence.  It is absolutely necessary to call it out by name and to denounce it unequivocally and wholeheartedly.  But beyond that, we must also offer a more loving way by unconditionally extending radical hospitality to all people of all faiths, in all places, at all times, throughout all of creation.

In these divided times, we are called as Christians to offer open arms, minds, and hearts to all of our neighbors.  Because, as New Zealand Prime Minister Jacinda Ardern so poignantly put it this past Friday, “They are us.”  And we’re glad you’re our neighbor.

Christian McIvor is a CBF Vestal Scholar who is currently pursuing a Master of Divinity degree (Class of 2020) at the Wake Forest University School of Divinity.  He holds M.M. and D.M.A. degrees from the University of North Carolina at Greensboro and he currently serves as the Minister of Music & Worship at College Park Baptist Church in Greensboro, NC.  He would like to express special thanks to Dr. Joshua Canzona for offering his impactful Comparative Theology course at the WFU School of Divinity.