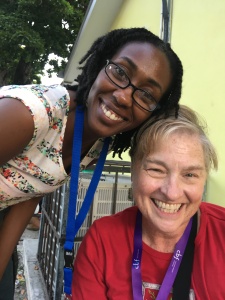 As a pastoral counselor and a congregational consultant, I have facilitated quite a few retreats, trainings, and workshops over the years, and am trained in crisis response work. So, when the email arrived from CBF at the end of September, asking if any endorsed counselors were available to be spiritual care providers in the Bahamas, post Hurricane Dorian, I was interested. It took time to get it all coordinated, but on October 26, I started out at “o-dark-thirty” to catch the flights needed to get to Nassau, then fly to Grand Bahama Island.

Hurricane Dorian was the most intense tropical cyclone on record to strike the Bahamas and is regarded as the worst natural disaster in the country’s history. As I heard over and over again while in the Bahamas, they had gone through Category 3 hurricanes before, but this one had jumped overnight to a Category 5 hitting Great Abaco, and then it hit and stalled over Grand Bahama, and their surrounding cays with unrelenting winds and rain for over 24 hours. Over 70,000 people were left homeless, most structures were destroyed or swept out to sea, boats were smashed or sunk, over 60 people died, and more than 400 remain missing and some bodies may still be buried under the rubble.  Bahamians kept saying that they knew how to handle a Category 3, but when it jumped to a 5, they were unprepared and overwhelmed.

I traveled with Rev. Teruco Tynes, a native Bahamian, former CBF employee and graduate of McAfee School of Theology. As the first counselor to deploy, my job would be working with her to assess the needs and to begin to craft a workable response plan specifically for the chaplains and counselors who would come later.

Our first and highest priority was to meet with the pastors of the CBF Bahamian churches located on Great Abaco and Grand Bahama islands. The evening we landed in Freeport, we went directly to a church where some of the Grand Bahama pastors were gathering.

Jet-lagged and sweating in the heat and humidity, I walked around the building while waiting for the pastors to arrive. Two months after the hurricane had hit, the church’s roof was covered with blue tarp. Several windows remained boarded up where glass had been shattered. Wood was still missing from eaves where the wind had whipped them out. What was once the church’s van was sitting, rusting, with its front smashed in from the water damage. An 18-wheeler truck was parked & locked with food and water supplies ready to hand out to residents the next day.

Although Freeport’s city water was finally working again, it was non-potable and too salty. Half the island didn’t even have access to that, so bottled water was needed by and for anyone who was on the island for drinking and cooking, and sometimes bathing and washing. Debris from the storm was still scattered around or piled up waiting for the undetermined time when it can be hauled away. I later saw this scene repeated over and over again across the island.

The pastors began arriving, some having driven over an hour to get there. They opened up the building, turning on the small window AC units as they noticed me wiping my face over and over again, brought out cool bottled water, and welcomed us into the church.

Elizabeth with co-pastors from Great Abaco displaced in Nassau

I was there to offer training and had brought handouts on topics such as Traumatic Stress and Grief, Primary vs. Secondary Losses, Moral Injury, Compassion Fatigue, Crisis Intervention Protocols, and Normal Responses to Expect after a Traumatic Event. My goal was to provide support and information about crisis responses, not knowing what they knew, had information on, or what would be helpful.

Primarily we wanted to provide a safe space where they could share their stories confidentially. They were hungry for the information I brought, and almost all of it was new to them. Normalizing the physical, emotional, behavioral, relational, and spiritual reactions that occur after a crisis provided a sense of relief that the experiences they and their parishioners were having were not “crazy”. As we bounced around between the various topics, they began to share their experiences, and to go deeper about what it is like to be the pastor experiencing all the trauma personally but also needing to be a spiritual leader to the flock who have gone through it as well. 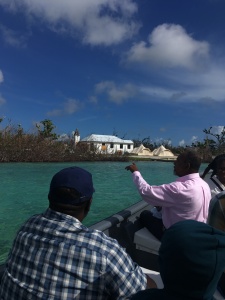 Aboard the ferry to Ebenezer Baptist Church in Sweetings Cay, with tents set up next to the damaged church

The next day (Sunday) we visited McLean’s Point, an hour and a half drive to the eastern end of Grand Bahama, and then took a boat over to the first of the small cays that trail out from there. Sweetings Cay, where one of the CBF churches is located, tries to maintain some worship services and community support. There is no electricity and the hum of generators running on $5/gallon gas provide the little power they can. There is no running water and most structures, including the schools, are destroyed. The few that remain have smashed windows, debris inside and out, and blue tarps strapped across the roofs.  here are tents set up where people live on the properties that have been destroyed. World Central Kitchen delivers meals daily as there is no way to cook with no grocery stores, no operating businesses, and no stoves or refrigeration. For the small cays everything is transported via small boats as no roads connect them.

Yet there is joy in seeing us come, joy as we step into the deacon’s tiny ferry boat that will transport us to Sweetings Cay, grace when we worship together and hear of one woman’s storm survival story, and serendipitous laughter when dolphins come alongside the ferry as we return to McLean’s Point after church.

Over the next few days we visited other churches providing community services in the Freeport area, then flew back to Nassau, where there is very little physical damage from the storm, but what has become the location for most of the social services for evacuees.

We spent time with the Red Cross psycho-social staff and volunteers, and found them competent, compassionate, and tired. When they learned I could offer additional crisis training, the director arranged for me to return the next day and lead a 2 hour training on Moral Injury and Compassion Fatigue. Finding out there was a name and a concept for what they had been experiencing, as they had listened over and over again to stories of trauma, seemed to be what was most helpful to them.

On my final day we met with CBF co-pastors from Great Abaco, repeating the same training resources. They too had lost homes, businesses, as well as church buildings, and members who are now scattered across the islands. They too were grateful for new information that helped them understand their own trauma responses, and that provided them with tools to support their congregants.

In the end, I came away with the beauty of the Bahamas and the Bahamian people, the compassion of Rev. Tynes, the graciousness of God’s love that brings us together, and the dedication, vision, and hope of the pastors who are leading the various CBF churches despite buildings being destroyed and communities uprooted.

It became clear that having CBF volunteers travel to be with them, to share resources, to listen to stories, and to know that the volunteers could see the beauty as well as the devastation provided deep gratitude and a sense of pride in being a part of the larger CBF family.

Although I am the first counselor who responded, I won’t be the last. I believe that we can continue to be helpful by offering ongoing support and training to the CBF Bahamian pastors and leaders who are providing the day-to-day care within their communities in Grand Bahama, Great Abaco, as well as to those displaced in Nassau. This is the beginning of a commitment to a deepening relationship. The skills and knowledge of CBF endorsed pastoral counselors and chaplains can bring in vital training which will only enrich and strengthen the work that CBF pastors are already doing in the Bahamas over the long term. Thanks be to God.

One thought on “Experiencing compassion post-crisis in the Bahamas”