When Carson and I were commissioned in 2013 as field personnel to Japan, we committed to serving for three years within two smaller Baptist congregations in the western part of central Japan. While we knew some about the current status of the church there, it wasn’t until we arrived that we began learning more about the work of God within and through one of those churches, Kanazawa Baptist Church.

Kanazawa Baptist was founded in 1953 with the assistance of Baptist missionaries. As the only Baptist church in its prefecture, the church grew over a few decades, but then declined to only five members. It was at that point that its current pastor, Rev. Taguchi, came to serve the church as a “home missionary” in the 1990s. That was nearly 25 years ago, and the bold faithfulness we have seen within this congregation has touched us deeply. 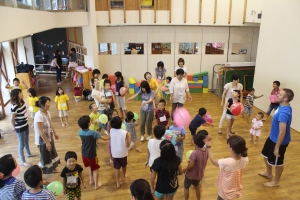 Carson Foushee (far right) with students and mothers from the Megumi Kindergarten at Kanazawa Baptist Church.

Kanazawa Baptist maintained its preschool and led it to become one of the best in the city, now welcoming 80-90 non-churched students every year. The congregation currently worships every week with around 40 people who come from around the prefecture to participate. About five years ago, the church began welcoming internationals into their family as members picked up international students from outside the city to come and join them on Sunday mornings. As the group of English-speaking internationals grew, Rev. Taguchi knew that more assistance was needed.

He pursued and helped form a partnership between the Japan Baptist Convention and CBF, and the two groups officially signed a memorandum of understanding in 2009. The first joint project would be hosting CBF field personnel at Kanazawa Baptist Church; they waited four years until we arrived in 2013. We were blessed to come alongside this church and co-pastor their English ministries, called Kanazawa International Baptist Church (KIBC), serving both internationals and bilingual Japanese.

At one point, KIBC welcomed 25-30 internationals from over 15 countries for their bi-weekly worship services and weekly English Bible studies. This once–dying congregation was now bursting at the seams, both numerically and cross-culturally.

It was natural, then, to begin considering new facilities. The original building had too many needed repairs to count and the parsonage had a leaky roof. 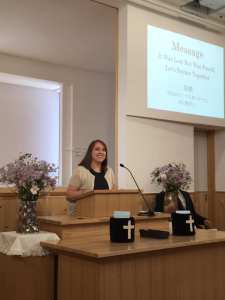 Through much prayer and lengthy conversations together, the congregation decided to begin preparing for a new building. A building fund was created, fundraising concerts were held, and promotional videos were made. In the fall of 2018, we returned to Kanazawa to celebrate the dedication of their new building, which includes a sanctuary, kitchen and fellowship hall, a pastor’s office, and a small guest apartment.

When we offered our last sermon at Kanazawa Baptist Church in September 2016, we reflected on that passage in Hebrews about the great cloud of witnesses. Like our spiritual mothers and fathers who are listed for their great faith in our Christian story, we knew we had been blessed to be a part of the story of Kanazawa Baptist Church. By faith, the church was planted by a couple of Baptists from America and a Japanese pastor, beginning in their homes.

By faith, the church welcomed Rev. Taguchi at a critical point in their congregation’s life, opening itself to the work of the Spirit to renew their church. By faith, they grew and welcomed people who were different from them into their church family. By faith, they pursued work with international partners in order to find new ways to minister in their community. By faith, they committed themselves to the tedious process of revitalizing their physical space so they could not only worship together, but open their doors to their city. And, as we reminded them in our last sermon, by faith their story will continue far into the future.

For us, our three years serving in Kanazawa and our continued friendships there have been a beautiful lesson of what it means to have a bold faith. At its most basic, it is holding to the belief that God has been at work in our history; God is still at work—even in dire or challenging circumstances; and God will still be at work, calling us to something fresh and new.

Laura Foushee serves alongside her husband, Carson, as CBF field personnel in Japan. You can learn more about and support their ministry at www.cbf.net/foushee. Help shape the future of the Fellowship, keeping it fresh and new, by taking CBF’s online survey today at www.cbf.net/survey.