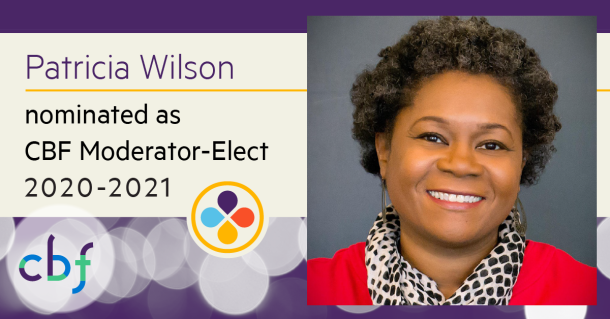 DECATUR, Ga.— A Baylor University law professor and lay leader deeply involved in CBF is the nominee to become the next Moderator-Elect for the Cooperative Baptist Fellowship at the upcoming virtual General Assembly, June 25-26.

The CBF Nominating Committee has selected Patricia Wilson to serve as Moderator-Elect in 2020-2021. Wilson has served since 1993 as professor at Baylor Law School in Waco, Texas, where her teaching responsibilities include employment discrimination, employment relations, labor law and family law. She received her undergraduate degree in sociology at Purdue University and Juris Doctor degree from Northwestern University Law School in Chicago.

She is a member of Seventh & James Baptist Church, a CBF congregation, where she currently serves as a deacon. At Seventh & James, Wilson has provided leadership as a deacon (2003-present) and twice served as deacon chair (2007, 2018). Additionally, she has served the church on numerous committees including the worship council (2010-2014; chair 2012-2014) and education council (2020-present).

She is also actively involved in the Waco community and has served on the boards of a number of local nonprofit organizations. She is a former licensed foster parent who fostered 20 children over the course of a decade. Wilson and her husband, Michael W. Jones, have four children: Dr. Alexandra Jones Adesina (32); Michael L. Jones (29); Brianna Jones (20); and Christopher Jones (16).

Wilson expressed excitement to step into the role of CBF Moderator-Elect and emphasized her appreciation and respect for the Fellowship.

“I am honored to have the opportunity to serve CBF in this role,” Wilson said. “Over the years, I have seen the good work that CBF does, and my appreciation and respect for the Fellowship continues to grow as I see it strengthen and renew its commitment to bearing witness to the love and grace of Christ Jesus. I value the Fellowship’s efforts to work collaboratively with groups and individuals around the world as they carry out the work of God’s kingdom on earth, and I love that CBF strives to be inclusive of all God’s children and to remain faithful to Baptist tenets.

“I approach the privilege of serving with humility. I request your prayers that I may be led by the Holy Spirit to serve faithfully and courageously, and that in all I do it will be to the glory of God.”

“I am so pleased that Patricia Wilson has agreed to serve as our next Moderator-Elect,” Baxley said. “She is a deeply committed lay leader in her congregation, a highly respected member of the faculty of the Baylor Law School, and for more than a decade she has held leadership positions in our Fellowship. She served on the Coordinating Council prior to the 2012 restructuring, the Governing Board and the Nominating Committee. She provided essential leadership in the implementation of For the Joy Set Before Us, our substantial strategic plan for Global Missions in 2015-16.

“I have come to respect her deep faith, strong intellect, considerable leadership gifts and her vision for our Fellowship as we move toward our future together. I am eager for the chance to serve with her and other leaders in our Fellowship as we move into the response phase of Toward Bold Faithfulness and lay a foundation for our ministry in our fourth decade and beyond.”

The CBF Nominating Committee, chaired by Christopher Mack, minister to young adults at Trinity Baptist Church in San Antonio, Texas, will present Wilson for approval from the virtual General Assembly, June 25-26, along with additional nominees to serve on the Fellowship’s Governing Board, Missions Council and Ministries Council.

Additionally, the Governing Board, led by CBF Moderator Kyle Reese, will bring forward nominees to serve on the Nominating Committee and the Council on Endorsement as well as the boards of CBF Church Benefits and the CBF Foundation.

At the conclusion of the virtual 2020 General Assembly, current CBF Moderator-Elect Carol McEntyre will assume the role of Moderator, the Fellowship’s highest ranking office.

Nominees to be presented for approval at the upcoming General Assembly are listed below:

All nominations are for a three-year term unless otherwise noted.