Beloved and influential Baptist pastor Rev. Dr. Hardy Clemons passed away July 1 at the age of 87. Clemons was a founding leader in the Cooperative Baptist Fellowship and served as CBF Moderator from 1993-1994. He also served on the CBF Coordinating Council from 1992-1996. 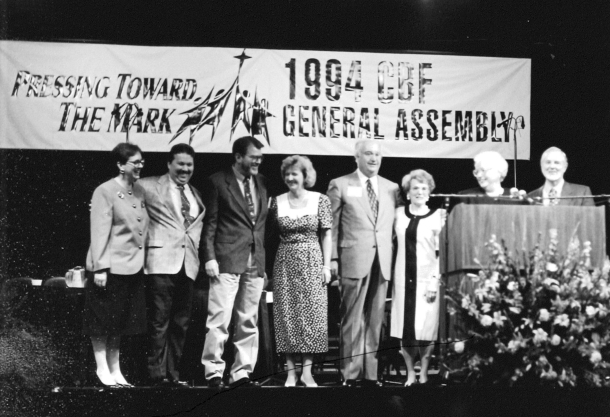 A native of Lubbock, Texas, Clemons was a graduate of Texas Tech University and Southwestern Baptist Theological Seminary. He did postdoctoral work at the C.G. Jung Institute in Zurich studying the relationship between psychology and theology and taught at the International Baptist Theological Seminary in Ruschlikon, Switzerland. Clemons also co-chaired the Religious Liberty Council of the Baptist Joint Committee. In 1994, Furman University honored Clemons with an honorary doctor of divinity degree.

“Today I ask you to join me in prayers of gratitude for the life, faith, ministry and witness of Hardy Clemons,” Baxley said. He was a gifted pastor to congregations and one of the most highly respected leaders in our Fellowship and the larger Baptist family. While we grieve his dying and pray for his family, all around us we see evidence of his faithfulness.”

Flying This Plane While We’re Still Building It

When the Nominating Committee of the Cooperative Baptist Fellowship Coordinating Council approached me to see if I would take the job as the third moderator of this fledgling organization, to say that I was surprised is a major understatement! The churches I had served since 1961 through the 1990s were clearly “moderate” churches. So with the approval of the leaders of First Baptist Church of Greenville, South Carolina, where I served as pastor, I told the committee I was honored to be invited and overwhelmed at the enormity of the task.

I had experienced some heavy encounters with people who were much more fundamentalist than moderate. These included Paul Pressler, who was at the University of Texas Law School while I was the Baptist Student Union Director at the University of Texas, and Paige Patterson, who was still in school but who wrote often about his criticisms of the direction of the Southern Baptist Convention. Both these men and their followers had little tolerance for the ideas of “unity in diversity” or “soul freedom.”

So I knew it would not be a smooth ride.

My assignment would be to serve as Moderator-Elect for a year, then Moderator. And in those days, it became clear that to begin building an institutional memory, we needed another two years from our leaders. So, each Moderator served an additional two years as Past Moderator and “Past, Past Moderator,” making a total of four years of service.

The early moderators were, in order, John Hewett, Patsy Ayres, myself, Carolyn Crumpler and Pat Anderson, who would become “past, past moderator,” as did I. Cecil Sherman was our worthy coordinator.

At some point, it was decided to discontinue the Past, Past Moderator’s job, which in hindsight works very well.

So, why did I agree to take the job?

Holding this concept made for a firm trust in God, cooperation with each other, and fidelity to scripture and to our ancient heritage, when Baptist Christians were indeed both free and faithful.

Hardy Clemons served as CBF Moderator from 1993-1994 and served on the CBF Coordinating Council from 1992-1996. He is a CBF-endorsed chaplain and served as the pastor of multiple churches from 1961 until 2008, when he retired from Trinity Baptist Church in San Antonio, Texas.

One thought on “Flying This Plane While We’re Still Building It: Remembering Hardy Clemons (1933-2020)”