Georgetown Baptist Church in Georgetown, Kentucky, commemorated their 30th anniversary of ordaining women deacons. The month-long celebration featured various events including a service officiated by the Rev. Heather Burke on November 11. They honored Maribeth Hambrick, one of the first women elected as a deacon in the church, at Windsor Gardens, an assisted living facility. Other deacons spoke and shared during the gathering.

Member Faith Hammond was elected as a deacon the third year that Georgetown Baptist allowed women deacons to serve.

Hammond said she knows thatother churches may vote to allow women deacons but then never elect one. This was not the case with Georgetown Baptist, who put emphasis on women in leadership roles.

“To me, being a deacon is to serve. It’s to try to minister to other people,” Hammond said.

When she first started, Hammond said her greatest challenge was combating feelings of unworthiness.

“I know when I was elected, I waited a year before I would serve communion,” Hammond explained. A fellow deacon came to her and asked why she was not helping with communion. 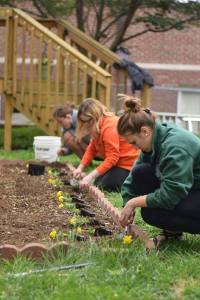 “I said, ‘I don’t feel worthy,’ and he told me something I never forgot: ‘If any of us waited until we were worthy, there wouldn’t be anybody here,’” Hammond said.

She maintains that deaconship is about service and letting people know they can call on her during a time of need. “The ministers can’t do it all by themselves,” she said. She added that people who are called to deaconship are not perfect. “I don’t want to portray an attitude of being ‘holier-than-thou.’ I am not a perfect deacon. I’m just a regular person,” she said. “It’s an honor that’s been bestowed on me.”

Hammond maintains that her church has been supportive of her calling and that she works with diverse groups of people. “We have four older women—one in her 70s and three of us in our 60s—and I just feel we have made a difference because of who we represent,” Hammond said. “While most of our deacon body is young, having older people there too is a representation of the entire church.” Hammond maintains this facilitates conversations among deacons of different generations. “It’s a blessing to work with young people and see their perspective. I find we do well together,” Hammond said.

She also enjoys working with her peers. “I think Maribeth served well into her 80s and did a good job. It’s been a privilege for me to watch and serve with these women who are older,” Hammond said.

Hammond says Georgetown Baptist Church supports her through acts of kindness and appreciation. “It’s so rewarding to see how much people appreciate that you’re willing to spend time with them,” she said. “I think the best gift I have found as I get older is time. It’s not things people want but time.”

Hammond admits that not everyone agrees with the idea that women should serve as deacons in the church, but that mindset is changing.

“I know we have people who think women shouldn’t be deacons. I think in any church you’re going to have some people who have difficulty with it, but if they say, ‘We love this church,’ they will accept it,” she said.

Hammond encourages women who may feel a calling to serve. “I think other women should consider it prayerfully, and if they are elected, to rely on God and do the best job they can,” she said.

She encourages churches to support their deacon bodies. “When we have ordinations of new deacons, we let them know we’re going to pray for them and that we will support them. For me, that’s the way churches should support,” she said.

Hammond says her favorite part of being a deacon is the ability to be available to people when they need help.

“We have what we call ‘deacon of the week.’ It’s to let people know that they can call you, and you will be there for them when they need you,” she said. “You don’t have to say a lot, you have to be just there.”

One thought on “Kentucky church celebrates 30 years of women deacons”