“I’m just so tired of this,” Karen immediately responded when I asked about her experience in quarantine.

The North African country in which Karen serves was officially locked down beginning March 20. That lockdown lasted until June 24 when some restrictions began to be slightly lifted.

Karen celebrated by taking a picture in the middle of her street in the middle of the night “just because she could.” Throughout the government-mandated lockdown, residents were allowed to leave their homes only to grocery shop or seek medical help and only with permission slips granted by the neighborhood police patrol, which Karen describes as “the official busybody who knows what’s going on with everyone.”

The lockdown was so strict that even going for a walk around the neighborhood was prohibited. Commute routes were assigned—no taking the scenic route—and police checkpoints were plentiful. Karen, who lives alone, found this stay-at-home order particularly isolating and challenging.

The lockdown also complicated Karen’s work as a Cooperative Baptist Fellowship field personnel. Presently, she is in the language and culture acclimation phase of her assignment, in which she does a lot of listening and learning before assuming more responsibilities at the church where she is stationed.

The church, which is comprised of 11 parishes, has a special focus on migrant outreach. Most of the migrants are from sub-Saharan African countries, arriving at the church’s doorsteps after fleeing war and economic devastation. The church is a place of respite on what is usually a dangerous and violent journey toward Europe. The countries through which the migrants must cross are often poorly regulated and governed, making many migrants susceptible to human traffickers. They often bribe them with the false hope of playing on a European soccer team, charging them exorbitant sums to ride on trucks where many of them sustain injuries or even fall off, and force them through desert terrain that is inhospitable to human life.

“By the time they get to us at the church, there are many medical, economic, and psychological needs,” Karen laments. She also reports that every female migrant that arrives at the church has suffered some form of sexual assault—most often having been gang-raped. To support these women, the church makes accompaniment a cornerstone of their ministry. The church staff and/or volunteers stay with the women as they go through triage screenings. Karen believes that one of the most meaningful gifts offered by the church is the willingness and desire to hear the stories of these survivors. For many of them, it is the only time they have ever been asked to share their stories.

In what is already a daunting ministry context, the global COVID-19 pandemic has exacerbated the desperation of the migrant population in North Africa. Because they lack the requisite paperwork, many migrants cannot obtain the aforementioned permission slips to acquire essentials nor move about the country to seek help. They are stuck in place, prohibited from even being in the streets to beg. Karen describes it this way: “Everyone we’ve been serving is in crisis mode right now. Everyone in our whole ecosystem is in crisis at the same time.”

One positive development of this situation is that it has presented an unprecedented opportunity for the government and the church to work together. The church began to supply food for a local migrant homeless shelter that is funded and run by the government. The mayor was even willing to collaborate with the church on food distribution efforts, offering to accompany church personnel as they delivered supplies to the community. Karen emphasizes how important it is to have the support of the local leaders because of the knowledge they possess of the terrain and culture. 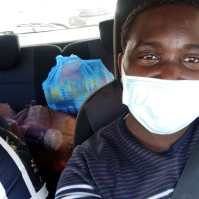 The pandemic has catapulted the members of the church where Karen serves into economic crisis. The congregation is young and mostly transient. A significant portion of the membership is comprised of students from other African countries. Caring for the congregation looks a lot like crisis management during this time, including rent support and negotiations with landlords. “It drains our budget really quickly and the need is much greater than what we can handle,” Karen says.

Recently the church had to rehome one of its members in safe housing after he suffered a beating at the hands of his landlord who was demanding rent in advance. Ministering at a distance to members from a collectivist culture is particularly difficult, especially in times of grief. The necessity for digital grieving has resulted in substantial emotional and psychological trauma for church members. Even worse is not being able to connect at all as some church members have no Internet access, a void which the staff is constantly working to address.

Other churches and organizations outside of the country help to financially sustain the church’s ministries. But as these international congregations face their own financial challenges, so does Karen’s church. “For our church, there is no aspect that hasn’t been affected by COVID-19. While we are still existing, our church looks much different than it did before. It’s just more humanitarian work at this point.”

Even against this grim backdrop, Karen has had some bright spots. She has formed a friendship with a neighbor who recently surprised her with a birthday gift, and she has acquired a kitten named Pickles.

But something that weighs on Karen is seeing the state of affairs at home. “America looks like [it is on] fire from where I am. Everything looks so bleak and bad. I’m struggling to maintain a sense of hope. It has been really hard to watch America fall apart.”

Speaking theologically, Karen shares that focusing on the nature of God helps her with this. “God is bigger than government and COVID and social injustice. We are not alone in any of this. I’m trying to learn that, but it’s still a challenge. I am not alone even though sometimes it feels like it.”