Most graduations in the spring of 2020 were altered or adjusted for safety due to COVID-19. For the graduates of Brinkley Heights Urban Academy in Memphis, Tennessee, this year’s graduation was one to remember. 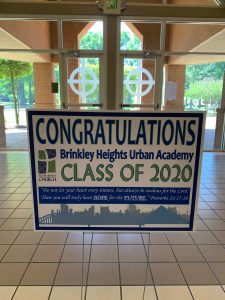 Brinkley Heights Urban Academy in Memphis serves an at-risk population and is on a campus that lacks adequate space to host a graduation ceremony. The neighborhood is one of the most economically challenged in Memphis. The school shares a partnership in mission with Second Baptist Church in Memphis which dates back to 1993.

In May of 2020, Brinkley Heights Urban Academy (BHUA) graduated their largest class yet with six graduates. But the biggest surprise for these graduates was yet to be revealed.

Second Baptist Church in Memphis has historically hosted the commencement exercises for BHUA in the sanctuary of the church. While the partnership has thrived in many areas, the graduation ceremony had never drawn much interest from the congregation.

With concerns related to COVID-19, the faculty and staff made arrangements to record the graduation ceremony on video for the families that were unable to attend. With a strict limit on the number of participants, the six graduates and the head of school were the only ones who were to be in attendance. All participants wore masks and maintained social distancing.

Daniel Johnson, who serves as the associate minister for congregational formation and missions at Second Baptist Memphis, said that while the church had loaned the space to BHUA in previous years, the congregation wanted to do something special for these graduates. 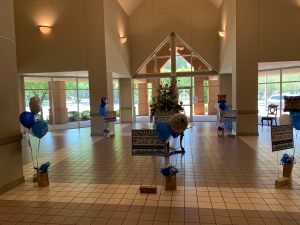 During a Dawnings retreat, the congregation had taken notice of the many groups that use the church throughout the week. They were amazed that more people were visiting the church during the week than were present on Sunday mornings for worship.

Stephen Cook, the senior pastor at Second Baptist, framed a question asking, “How are we a center of community as opposed to being a community center?”

With this opportunity in mind, a healthy history met a generous response from the church. Johnson also speculates that the quarantine may have inspired a new level of hospitality from the congregation.

“Well, we had never really done anything special for their previous graduations.  We had it on our calendar and announced it in our newsletter, but had never really invited our people to be a part of the event.  Our senior pastor had participated a couple of times to offer a prayer, I believe. But, this year, because of COVID-19, a new idea emerged,” said Johnson.

The graduates knew the restrictions, and expected to be the only persons in attendance. However, instead of finding simply an empty church, lay persons from Second Baptist had collected funds and created a gift bag for each graduate. Each of the graduates from Brinkley Heights Urban Academy received a yard sign, notes of encouragement and congratulations, and a gift card worth $400. 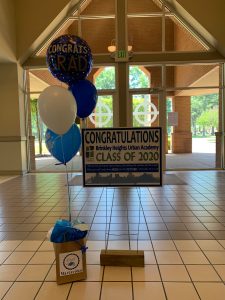 The success of the effort completely surpassed everyone’s expectations. “We thought we might be able to give each grad $50 in gift cards, but we ended up getting over $2,200,” said Johnson.

Kacie Jones, who works with donors and volunteers at BHUA, echoed the gratitude expressed by the graduates. “The students were so excited about being able to have a graduation. They had all worked really hard, and we wanted to celebrate that. We arrived at Second Baptist and saw all of the balloons, gift bags, cards and signs set out for each student. They were shocked at the generosity of our friends at Second Baptist Church,” said Jones.

The students from BHUA now know the support and love from a community of faith, and the people of Second Baptist Church have a new understanding of six local graduates and know a bit more about their goals and dreams for the future.

As churches all over the world are adapting their missions and ministry efforts due to COVID-19, Johnson stressed the importance of working within existing relationships and partnerships. “Mission is all about developing ongoing, long-term relationships. So, when something like COVID happens, even if you are not looking to open a door for ministry opportunities, those opportunities will bubble up from the trusted relationships you have already established,” said Johnson.

Trusted relationships and partnerships can survive tough times and emerge even stronger despite the challenges faced. Such is the case for Second Baptist Church in Memphis and Brinkley Heights Urban Academy.

“By responding in love and encouragement to these graduates, the church answered the pastor’s question about being a center of community and deepened the relationship and trust between Second Baptist and the Brinkley Heights Urban Academy,” said Johnson. “The church also felt the joy in giving and instituted what is likely to be a tradition for years to come.”