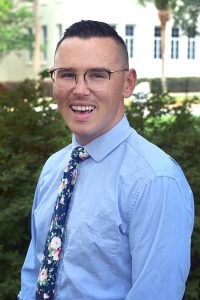 John Ray Roberts, CPT, USAR is the Coordinator for Leadership Assessment at The Citadel’s Krause Center for Leadership and Ethics. On staff at The Citadel, his alma mater, Roberts engages Cadets in service learning and reflection. He invites them to explore different points of view on campus, in the surrounding community of Charleston, South Carolina, and beyond. Additionally, as a United States Army reserve chaplain, Roberts provides spiritual care, resources, and counsel to soldiers in Charleston, S.C., Wilmington, N.C., Beaumont, Texas, and Orlando and Tampa, Fla.

Roberts was raised in rural Tennessee in a Southern Baptist Church. As a first-generation college student, arriving at The Citadel was daunting. He attended on a four-year-active duty scholarship and planned to become a chemical officer in the Army.

During his college years, through involvement in the Baptist Collegiate Ministry and ministry opportunities while home in Tennessee, he experienced a personal spiritual reawakening and felt compelled toward a life of pacifism. He wondered how he could faithfully serve in the Army with this conviction. 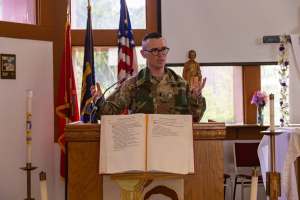 The role of chaplain, someone who still serves as a soldier but legally cannot carry a firearm, turned out to be a way to make all of these pieces fit.

Connecting with the CBF

Roberts began his theological education at the Southern Baptist Theological Seminary in Louisville, Kentucky. While attending seminary he connected with Highland Baptist, a CBF church. In 2015, Roberts switched his chaplaincy endorsement to the CBF and decided to change seminaries as well. He completed his Master of Divinity at Louisville Presbyterian Seminary.

The CBF has renewed Roberts’ faith in the Baptist world. Being “part of an organization and a Fellowship that brings together so many different voices from so many parts of the spectrum…it’s this beautiful image on earth of this multiplicity of God,” he said.

Over the door as you leave Highland Baptist Church there is a paraphrase of James 1:22, “Be doers of the word and not hearers only.”

Roberts explained how this verse informs his faith: “it’s the idea that I entered into this relationship with God and Jesus to have a commitment to my community through service and through marginalized communities that Jesus has specifically told us to care for.”

Culmination of a Call

Looking back on his journey, Roberts acknowledges how life has come full circle and culminated in the roles he serves in now.

As a reserve chaplain and as a staff person at the Krause Center, Roberts’ faith is embedded into his leadership and service with soldiers and students. His faith is the reason he serves—the cross he wears on his uniform helps communicate this—but his is not a proselytizing role in either space.

Even though he is a CBF-endorsed chaplain, he is chaplain to soldiers of many different faiths and to some who are atheists. His call is to provide the spiritual care they all deserve and help ensure they have the right to practice their religion, whatever that may be. He engages soldiers with questions like, “What is it that encourages you to serve?” or “Who is God to you; who is this God and how is it that you can become closer to that God?”

On The Citadel campus, Roberts walks with students as they develop as leaders. He engages them in opportunities to serve in the community and to then reflect on these experiences. He asks, “what is it that makes you want to serve and how can you strengthen that identity in yourself?”

Whether Roberts is working

with soldiers or cadets, he is helping form leaders who will go out to serve around our country and world. These men and women each have their own sphere of influence and opportunities to treat those around them with care and dignity.

A Doer of the Word, Not Just a Hearer

Roberts always knew that he would serve in the military. As he reflects on his role as chaplain, someone trained to vocationally serve God, he offers these words:

“In my opinion, it’s not the ministers and the pastors and the chaplains who are doing the most work for God. It’s really those people in the pews…they’re going back to whatever it is that they’re doing, and God is using them.”

As followers of Christ, we are called to be doers of the word, not just hearers. In response to that call, Roberts is walking faithfully beside the men and women who serve our country.

As people in the pews and part of the CBF, how are we responding to the call to be doers of the word where we live and serve? 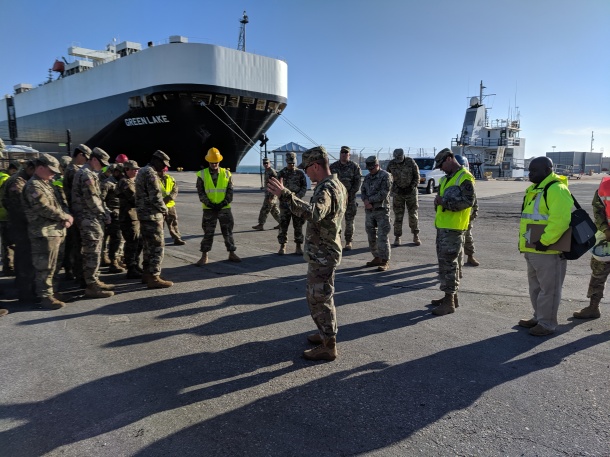