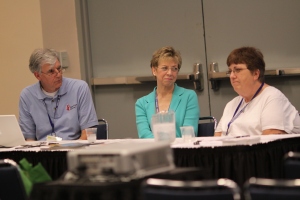 Wayne Smith, Carolyn McClendon and Karen Estle presented at a workshop about HIV/AIDS.

For Wayne Smith, Karen Estle and Carolyn McClendon, a relationship with someone who had HIV/AIDS was what drew them to HIV/AIDS ministry. In a workshop about HIV/AIDS ministry at CBF’s General Assembly, they shared their stories.

“The first step of ministry is to show up,” says Wayne, a former school principal who directs Samaritan Ministry in Tennessee. Wayne first became involved in HIV/AIDS ministry when his church decided to learn more about the disease so they’d be ready to minister if someone affected by HIV/AIDS came to the church. Through that education he met Danny, who was dying from HIV. They became friends, and Danny would often say, “’I wish I could get up out of this bed and tell people about AIDS,’” Wayne recalled. “Danny can’t be here today because he died, but he sent me.” If you could see all the impact Samaritan Ministry has in the community and in the lives of those with HIV/AIDS, there’d be no doubt that God sent Wayne to do this ministry, too.

Carolyn met Jason and Daniel in New Orleans. Daniel was Jason’s caregiver, and Jason was dying of AIDS. You never saw one without the other until the day Jason died. Daniel hugged Carolyn and cried and cried and cried. Later he told her she represented that day a God he didn’t know cared. Now, as faith ministry program director at Alliance of AIDS Services-Carolina, she shares that same message with those living with HIV/AIDS in the Raleigh-Durham area of North Carolina.

Karen will tell you that God’s vision was a lot bigger than hers. She never intended to become so involved with HIV/AIDS ministry that people in her church would call her “the AIDS lady.” But when she heard the stories of those living with HIV/AIDS, she recognized her own story. Having suffered with polio as a child, Karen knew what it was like to have people fear her because of an illness. And as she’s introduced other people in her church to HIV/AIDS ministry, they’ve also recognized their own stories in those living with HIV/AIDS. One man didn’t really want to be involved in the ministry, but he came once and didn’t want to leave. Others in the church have found HIV/AIDS ministry a place to live out their passion and be the presence of Christ. “This ministry goes both ways. It has changed the church,” Karen said.