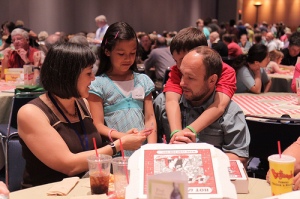 Past, present and future CBF field personnel gathered today for the first annual Missions Picnic to share a meal with the CBF “missions family” – more than 400 of their closest friends, family and supporters.  As CBF Global Missions Coordinator Rob Nash prayed over the meal, he acknowledged the inspirational commitment that these missionaries and their families have made. “These are the people who are living out the vision for mission engagement around the world,” he said.

As Jim Smith, Director of Field Ministries, recognized field personnel, newly-commissioned missionary Ryan Clark took a moment to speak with me about what it meant to be one in a room full of missionaries, all following a call to serve.

“Cindy and I had always entertained the idea of serving overseas, but it was always just something we considered on and off,” Clark said. “It wasn’t until after Emily Jane came along that we really considered what we were doing with our lives and where we wanted to go.” Emily Jane, now 18 months old, will accompany her parents to the Philippines this September, where her mom and dad will both join the faculty of the Philippines Baptist Theological Seminary in Baguio City.

As Ryan, wide-eyed, looked around the room full of missionaries of all ages and from all places around the world, he reflected upon his own upcoming mission. “I’m excited and nervous at this point,” he said. “I don’t think I realized until now that this is really going to happen – it’s finally started to sink in.”

Some children chased each other between our tables, and as I scanned the room, I saw retired field personnel congratulating fresh-faced couples who are looking forward to their first missions experiences. I saw tables filled with people of all sizes, shapes and colors, laughing and listening to stories of communications mishaps or travel woes. The Missions Picnic was just that – a time for a community of faith to fellowship in celebration, share a few laughs, and fill up with the love and support of their missions family.