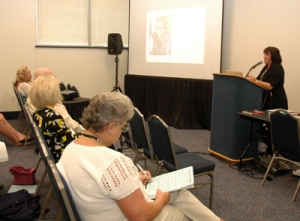 CIndy Ruble, one of CBF’s field personnel, leads a workshop on human trafficking.

Eddy Ruble, one of CBF’s field personnel, was in a Malaysian mountain market when a young woman asked if he could help her friend return home. For nearly three years, her young friend had worked and never been paid. Her employer had falsified and taken her passport, and she didn’t know how she’d ever get back to her home in Indonesia. She had run away several times, only to be caught, beaten and brought back to her employer.

This is modern-day slavery – a crime that holds captive an estimated 27 million people worldwide. And the statistics just continue to grow in part because of low cost. $90 is the average cost of a slave.

At a workshop Friday during CBF’s General Assembly, Cindy Ruble – also one of CBF’s field personnel – challenged Fellowship Baptists to develop “eyes to see…something we don’t often see or recognize around us.”

Through their ministry partners and networks, the Rubles were able to help the young woman from the market return safely home to Indonesia. But there are other ways you can help, such as paying attention to suspicious activity in your own community (for example: about 25 percent of human trafficking victims in the United States are in Texas), supporting ministries and efforts to educate girls in impoverished countries, and being a conscious consumer of fair trade products.

“God is a god who cares about these issues and expects us to too,” Ruble said. “You can learn enough that you can make a difference.”