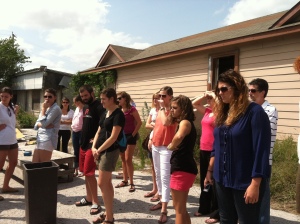 Team visits an abandoned brothel where over 80 were rescued from sex trafficking.

It was a different kind of mission trip. We hosted a group of 25 college students and their leaders for a week here in Houston, TX. No houses were built. No vacation Bible schools took place. No sports camps with inner city youth filled city parks. Those are all valid ways to engage.  This experience however was designed to help participants become comfortable just being; because sometimes missional is about being and not necessarily doing.

The week included worshiping with different ethnic congregations and visiting various places of worship. A mosque was included. The women though a bit uncomfortable covered their heads. Graciously, a wonderful meal was offered. The Imam noted the women’s head coverings and expressed his appreciation. Hindu, Sikh, and Buddhist temples were visited and the faiths explained by our hosts. A day was set aside to learn about human trafficking and the vulnerability of men, women, and children to the crime. The week culminated in a visit to another  mosque to learn about Islam, observe and be a part of the Friday prayer time, and lunch with our hosts.  That evening the team hosted a group from the mosque for a dinner. Honestly, we were all a bit nervous! Would people mix? Would they find things to talk about? Would the food be acceptable? What took place was beautiful.

The team immediately went up, introduced themselves and greeted appropriately. Without any hesitation, tables filled with men and women separating in a very natural fashion. As I roamed from table to table I was amazed at the conversations. Everything from how does dating occur between boys and girls, to the meaning of the Trinity, to the work of the Holy Spirit, to favorite sports teams….. Respectfully our Muslim guests permitted one of our women leaders to bless the food in Jesus name. Vice versa conversation halted for a short time before dessert in order for the Muslim guests to offer their evening prayers. Two hours flew by! The smiles and excitement said better than any words what a success the evening had been, not to mention the new connections made immediately on social media. (I love smart phones and facebook at moments like these!)  In discussing it afterwards more than one team member expressed their amazement that these new friends were just people like them. A few of them realized and lamented ways that they had stereotyped people of other faiths.

The team did miss having more physical activity during week. And I must confess that I don’t keep up with college students the way I used to!  Being “still” on a missions experience is not easy.  Going on a mission trip is not usually about being a learner rather than a doer.  Doing is important. Regrettably too often we do, leave, and then forget. We remain unchanged. We are experiencing the greatest mixing of peoples in human history. In this new world of transnationalism, immigration, third culture kids, global partnerships, etc, missional means being neighbors, being friends, being hospitable, being loving, being learners…. being disciples of Christ.