On Friday, March 22, at a banquet held by the Coral Gables Chamber of Commerce, Angel Pittman was named Businesswoman of the Year for the non-profit sector. Angel and her husband Jason serve as CBF field personnel in Miami. She received the award as the director of Touching Miami with Love, a ministry of the Fellowship and CBF of Florida located in the Overtown neighborhood of Miami, one the poorest communities in the state.

The following is from Ray Johnson, coordinator of CBF Florida: 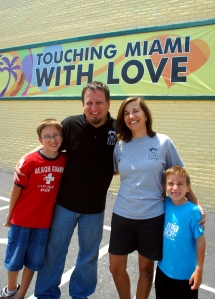 During our Representative Assembly meeting over the first weekend in March, I announced that Angel Pittman (at Touching Miami with Love) had been nominated as the AXA Business Woman of the Year (in the category of Non-Profit/Public Service).  She made it to the narrowed field of three women and today at the award luncheon was named the winner!

I am extraordinarily proud of the work that Angel does (and Jason, too).  This is certainly no surprise to all of us who know Angel and the ministry of TML.  I wanted to send you all this word so that you can offer Angel words of congratulations and support.

11 thoughts on “Angel Pittman named Businesswoman of the Year”