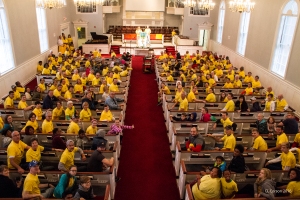 More than 650 volunteers each year come together to participate in the projects of Hands on Kirkwood.

It began with a simple question: “If we were to ask people in our community what they thought about Kirkwood Baptist Church, what would they say?” That is the way Daniel Johnson, then associate pastor for students at  Kirkwood stands as an annual day of service in Kirkwood, Mo., which draws more than 650 volunteers each year and features projects encompassing things like a winter clothes drive, home repair, electronic recycling, care for seniors and car winterizing. It involves not only multiple area churches but also civic and private organizations as well. Hands on Kirkwood is truly a city-wide effort, yet it began with one simple question posed to a couple of Sunday school classes.

Inspired by the Operation Inasmuch model shared by David Crocker at a 2005 CBF gathering in Grapevine, Texas, Johnson came back to Kirkwood with the hope that this was something his church could embrace. In the early 1990s, Kirkwood Baptist came to terms with its own dissonance from the Southern Baptist Convention and, by the early 2000s, “people had pretty much made up their minds to be a moderate Baptist church in Kirkwood,” Johnson said. This led members and staff alike to wonder what new identity they might center their church around. Johnson believed something like Operation Inasmuch could be the solution. 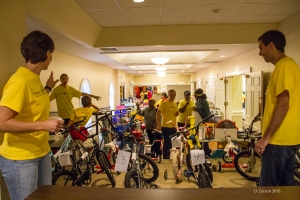 Volunteers organize bicycles in the toy shop of Hands on Kirkwood, which offers community children the opportunity to “shop” free for toys, books, puzzles, games and more.

When Johnson first posed the question to two Sunday school classes about what other community members might think of their church, two subjects consistently rose to the top: their Weekly Early Education Center and their parking lot. The plot of land which was the parking lot was formerly the site of a house that was part of a beautiful neighborhood; procuring the land for parking lot space had stirred up tension. Johnson and others wanted the church to be known for something more in the community.

Johnson also recognized that Hands on Kirkwood would have to be driven by the laity of the church. That is when he found Jason and Cindy Norton, two lay people who have served on the planning committee since the beginning. “Jason and Cindy felt it was their calling. Without them, it wouldn’t be what it is today,” Johnson said.

Those early conversations and the newfound leadership laid the groundwork for Kirkwood’s first Day of Service on the first Saturday in October 2007. According to the Operation Inasmuch model, a church could expect about 75 percent participation from its members. The church’s original goal was to have 150 volunteers serve. In that first year, Kirkwood saw 225-plus volunteers participate. In its second year, that number exploded to more than 350. 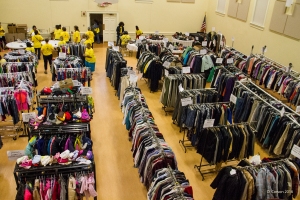 In 2008, events in the community drastically transformed the complexion of Hands on Kirkwood. On February 7, Charles Lee “Cookie” Thornton, a 52-year-old African-American man, entered Kirkwood City Hall and went on a shooting spree, killing six and leaving two others injured. In the aftermath, Thornton was killed by police. Thornton had long been a presence at City Hall, feeling he had been slighted by the city council for business contracts the city entered into with him to oversee the development of Meachem Park, an unincorporated area that Kirkwood had annexed in 1992. Kirkwood is a predominantly white city and Meacham Park a primarily African-American community. Though the proposition to incorporate Meacham Park was approved by both communities, the shooting laid bare the racial tensions which had been brewing in Kirkwood.

Out of the tragedy, Kirkwood Baptist leaders began to dream of ways to reach across the racial divisions and bring healing to the two communities. Scott Stearman, pastor of Kirkwood Baptist from 2003 to 2015, was already acquainted with Jeffrey Croft, pastor of Harrison Avenue Missionary Baptist, through community ministry events.

“The first thing I did was to call Jeffrey to have lunch,” Stearman recalled.

That lunch sparked a wave of events aimed at encouraging dialogue and healing between white and black communities. It started with a series of community dialogues, the first of which was hosted by Kirkwood Baptist, drawing over 200 people. The dialogue centered around understanding the grievances the community was facing.
“Some of the predominantly white community had to wake up to a truth that they might not have had to face without the reality of that violence,” Stearman noted.

For Kirkwood Baptist, the impact of these events challenged them to re-imagine Hands on Kirkwood and its role in improving racial divisions. With a friendship already developing between Stearman and Croft, there was fertile ground for a partnership between Harrison Avenue Missionary Baptist and Kirkwood Baptist. In 2008, the two churches came together to serve their community. Still, Kirkwood felt that more was needed to make this a truly interracial effort. They took the next steps by moving to integrate leaders from both churches into the planning group for Hands on Kirkwood.

Stearman believed that joining together for a day of service was the best way to form authentic relationships. “Focusing on a goal or task was a good way to form relationships,” he noted. In Harrison Avenue, the church found not only a partner in mission but also a guide to help them navigate the nuances of race relations and the needs of the areas they were serving.

Since then, the partnership and the Day of Service have grown into much more. Roslyn Croft, the wife of Jeffrey Croft, has been on the planning committee for Hands on Kirkwood with Jason and Cindy Norton for years, helping to launch new programs like a winter clothes closet — one of the many projects spawned out of Hands on Kirkwood.

The work has similarly energized her congregation far beyond their expectations. “We’re a pretty small congregation; but with all the activities available, at least 80 percent of our church members are involved,” Croft said. Including donations and supplies, she believes the participation level is much higher. The two churches also joined together in a Covenant of Action through the New Baptist Covenant, working with St. Luke Memorial Missionary Baptist Church to combat predatory lending in addition to their efforts via Hands on Kirkwood.

The two congregations now worship together as well, inviting each pastor to preach in the pulpit of the other on occasion and attending annual services in celebration of Martin Luther King, Jr. Day.

“Going back to Dr. King’s saying that Sunday morning is the most segregated hour of the week, we worship together,” Croft said. “If I go to Kirkwood, people know who I am and that’s a good thing,” she remarked. Indeed, true friendships have been formed over a shared commitment to serve the community.

From there, this desire for partnerships and relationships only grew. Kirkwood invited Lutheran, Episcopalian and other church groups to be a part of the project. They forged partnerships with civic leaders and private businesses, including the local Rotary Club and the Girl Scouts. In 2011, Art McDonald, the mayor of Kirkwood, approached them about making Hands on Kirkwood a truly city-wide event.

“Those were the initial seeds to giving Hands on Kirkwood away,” according to Johnson. “If we give this away, we’ll have fewer of our church members involved, but we’ll have more community members involved,” he thought. “We were willing to do it because we thought it was better for the community in the long run. It was a Kingdom thing.”

From those seeds, the fruits of healing, hope, and a long-standing commitment to serve Kirkwood have germinated. More than 650 volunteers show up for Hands on Kirkwood each year. In 2015 alone, 35 homes were repaired, 23,000 pounds of electronic waste were recycled, 57 cars were winterized, 100 boxes of food were donated to a local pantry, and enough food was donated to kick-start the Brown Bag Cafe, a new food pantry for students in need at St. Louis Community College at Meramec. Five hundred people received 10,000 items from the winter clothes drive. In 2016, on its 10th anniversary, the city made an official proclamation that the first Saturday in October would be Hands on Kirkwood Day.

Kirkwood pastor Matt Vandagriff says that Hands on Kirkwood “reveals what can happen in a community when churches reach across racial boundaries and seek to better the entire city.” “I am grateful to inherit this ministry opportunity that transcends Kirkwood Baptist or Harrison Avenue and I am grateful for the incredible people who lead this work in Kirkwood, Mo.,” he added.

Hands on Kirkwood brings together volunteers to benefit the community of Kirkwood, Mo., and to build relationships beyond single-church walls.

One thought on “Hands on Kirkwood: Missouri church launches annual day of service that grows city-wide”