Reynolds at Firebase Ranch House in the Nangehar Province of Afghanistan in the Hindu-Kush Mountains.

In 1989, while pastoring a church in California, Charlie Reynolds knew he needed to raise his income in order to support his family although he continued to feel strongly his call to the church and ministry. At the suggestion of a friend, he explored chaplaincy through the military, where serving as a chaplain in the California National Guard, he would extend his ministry by one weekend a month and two full weeks each year.

“I had previously worked as a counselor at Camp Peaks of Otter Royal Ambassador (RA) Camp, which was a wilderness camp in Bedford, Va.,” Reynolds reflected. “I discovered that the National Guard was like working RA Camp, except that these campers carried guns!”

Reynolds’ ministry with the National Guard flourished throughout the coming years and in 1992, he was named the Outstanding Chaplain for the United States 6th Army.

“It felt like a natural fit for me,” Reynolds said. “I love doing dangerous things, like jumping out of airplanes; but my ministry in the army is truly a ministry of presence for a short time in people’s lives. I get to be present with people during life-changing situations — critical situations.” 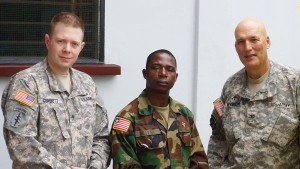 By 1993, when Reynolds felt his calling leading him into full-time military chaplaincy, he became an active duty chaplain. Over the past 24 years, he has spent at least a decade overseas, with seven deployments, including one year in Iraq, 16 months in Afghanistan, one year in Bosnia and one month in Macedonia.

In 2014, during the height of the Ebola crisis, Reynolds was sent to Liberia to minister to Joint Forces and United States Embassy personnel in the capital city of Monrovia as part of Operation United Assistance.

“This was unusual,” Reynolds noted. “As the Joint Forces Command Chaplain for Operation United Assistance (JFC-OUA), when I would normally be primarily responsible for managing other chaplains and chaplain assistants, and ensuring that religious support was integrated into military operations, there were no chaplains to supervise.”

Because of the severity of the Ebola outbreak and the unknowns related to the spread and treatment of the virus, and with limited room for housing, the U.S. had not sent as many military personnel as might have been typical. In the combination of Army, Navy, Marines, Air Force and Coast Guard personnel, there were fewer than 500 total military personnel in Monrovia at the time of Reynolds’ arrival.

In addition to ministry with the military personnel in Liberia, the Commanding General, Darrell A. Williams, requested that Reynolds visit the U.S. Embassy in Liberia to provide counseling and pastoral care for the personnel of the United States Agency for International Development (USAID). Not only was he a regular pastoral presence for the USAID staff, but he also provided a weekly devotion for the Major General and the U.S. Ambassador to Liberia, Deborah Malac. 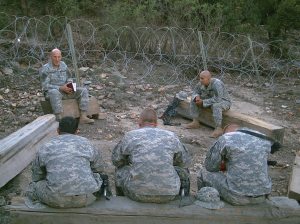 Chaplain Charlie Reynolds holds a service at the Korengal Outpost near the border of Pakistan. Formerly a Taliban Lumber Yard, the Korengal Outpost was the most dangerous location in Afghanistan at the time of this photo. The barbed wire perimeter served as the chapel for the battalion there.

“Once I joined the National Guard in 1989, I began to write a monthly devotion for my commander;’ Reynolds shared. “I was a pastor at the time, and quickly recognized that commanders had some of the same leadership challenges that pastors have. I saw the need to provide a devotion to address some of those challenges.”

During that time, Reynolds met a USAID worker named Toni Kumi, who led a daily prayer group at the Embassy. Kumi invited Reynolds to preach for the group on occasion, and later wrote these words to Reynolds after he had departed Liberia:

It is said that anybody can run towards the light. However, it takes courage and wisdom to run toward darkness and shine your own light on it. This is exactly what you and the United States Army have done. While the rest of the world was running away and shutting their borders on us, you ran toward the darkest part of our history and threw your own light on it. As a result, everybody in the streets of Monrovia is now saying things are getting better. Thisis not because the deadly infection is going down, but because the fear that crippled us initially is no more because of the presence of your light.

Chaplain Reynolds became a pastor, mentor and friend to the many people he encountered in Liberia during one of the most devastating periods in the country’s history. He entered a nation that had only within the last decade begun to rebuild from a gruesome civil war only to become ravaged by a disease they did not have the resources to fight on their own. He brought hope through his ministry of presence.

“These were Liberians who were feeling the weight of being leading citizens in a country that was being devastated by Ebola,” Reynolds remembered. “Many of them knew persons who had died. The U.S. workers had had their families return to the U.S. They had lost hope. My job was to bring them hope.

“The kabad of God brought me to tears as my heart reached out to those who had been covered with a cloud of despair. I could feel the Glory of God lifting that cloud in those three services [that he performed at the Embassy].”

The past 24 years of ministry in the U.S. military have exposed Reynolds to people of various backgrounds, religions and ethnicities. He has spent a number of years as the primary Protestant chaplain on military bases, as well as serving during short-term deployments like the one in Liberia. Through the years, he has trained numerous other chaplains, even serving as the Strategic Religious Advisor for United States Forces Iraq (USF-1) in 2011.

Reynolds meets with Sheik Jarba at the U.S. Embassy in Liberia.

His exposure to varying worldviews and his position in Iraq, among other contributing factors, have led him to be a conduit for positive relationships between Islamic and Western cultures.

“My calling right now is to try to improve relationships between the Islamic world and the Western world,” Reynolds said. “Americans have a cultural bias that keeps us from looking at religious factors. When we are looking at state issues, we tend to exclude religion. I’m convinced that we’ve lost a lot of fights because we haven’t been sensitive to religious issues. The more we know about the religious influences of the areas we are entering, the more likely we are to resolve conflict instead of making it worse.”

Although the coming years of Reynolds’ ministry will not put him “on the field” as frequently, he continues to take seriously his role as an advisor in religious issues. Because many of the countries the U.S. continues to engage in conflict have predominate religious influences, Reynolds’ ongoing instruction and awareness help the military enter different cultures — particularly Muslim ones — with an understanding that allows them to navigate those settings with more care.

CBF has also reaped the benefits of Reynolds’ knowledge and worldview, as he has led workshops at General Assembly and offered a unique perspective to assist and encourage Cooperative Baptists who seek to engage globally through missions and advocacy. 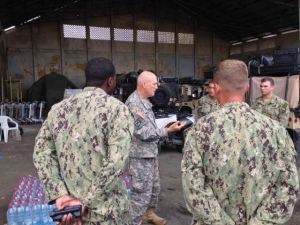 Chaplain Charlie Reynolds conducts a worship service for a group of Navy Sea Bee’s in a hangar at the airport in Monrovia, Liberia.

“When I go to a CBF Assembly, I feel very much at home,” Reynolds shared. “I was able to do a presentation on Islam in Greensboro. I hoped to help Christians see and understand the Muslim worldview and to facilitate Christians in building positive friendships and relationships with Muslims.”

Throughout the years, Reynolds has maintained one focus: to find the kabad, the holy, the weighty. Many times, he has been brought to tears by the weight of the encounters he has faced. But, in the midst of the heaviness, he had found the Glory of God to be ever present throughout his ministry.

“Chaplaincy is really raw ministry,” Reynolds reflected. “Soldiers don’t sugar coat. There’s a raw honesty with soldiers that I love. They are real people. Every encounter I have with a soldier is a positive encounter. I can truly understand the words Jesus spoke when he said, ‘Such faith have I not found in all of Israel.”‘

Dr. Charlie Reynolds offers the seminar “What Christians Should Know About Islam” for churches, covering topics such as:

One thought on “Being a Pastoral Presence: CBF military chaplain focuses on improving interfaith relationships around the globe”